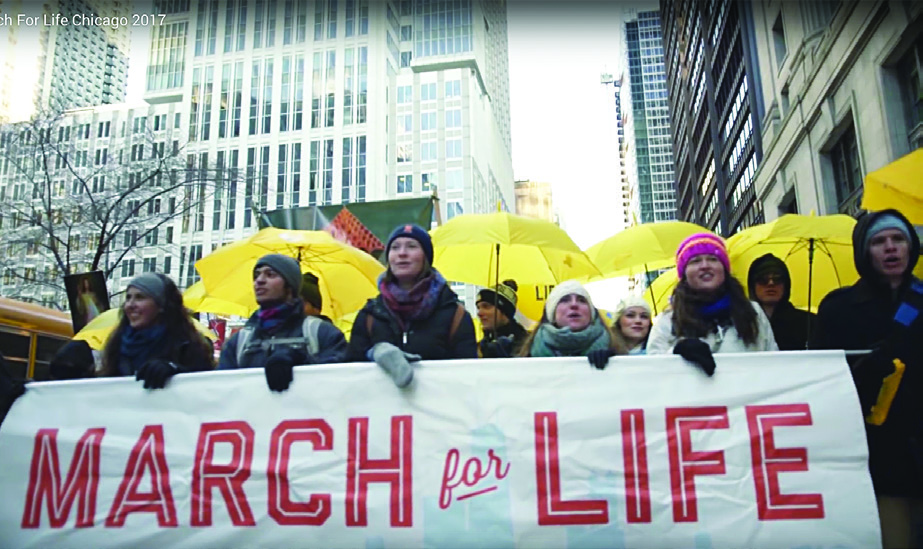 Springfield | Multiple pregnancy resource centers are suing Illinois Governor Bruce Rauner over a new law they say prohibits free speech and requires them to voice a message about abortion that is directly contrary to their mission. Pro-life advocates also are watching a pending bill that would expand abortion coverage for those on Medicaid and state workers’ health insurance plans.

On Feb. 9, 18 pregnancy resource centers filed for an injunction to avoid being forced to comply with an amendment to the Health Care Right of Conscience Act that was approved by the Illinois General Assembly last year and went into effect January 1. The amendment requires pregnancy centers and pro-life physicians to discuss abortion as a legal treatment option, to talk about its “benefits,” and, if asked, to refer clients to abortion providers, said Attorney Thomas Olp of the Thomas More Society, one of the legal organizations working with pregnancy care centers to fight enforcement of the new law.

For the centers, Olp said, “It’s an interfering by the government with their ability to communicate feely about an important moral issue.” The law also constitutes “viewpoint discrimination,” he added, in that it only regulates the speech of people with a particular viewpoint.

Olp said the government has to have a compelling interest in order to enforce such a law, and the view of the Thomas More Society is that it doesn’t, because information about abortion is readily available. Therefore, the government doesn’t have to compel people to talk about it.

Pregnancy resource centers have already felt the effects of the measure, Olp said. “Some of them have decided not to do sonograms because that’s a medical procedure that clearly is covered by the new law.” Hope Life Center in Sterling, one of the centers represented by the Thomas More Society in a separate lawsuit filed Feb. 2, suspended its medical services at the beginning of the year. Debbie Case, the center’s executive director, posted on its website about the change in operations.

“We see any compliance with this law as morally abhorrent and have determined to obey God rather than man,” Case said. “The law is unclear on what the penalties are for non-compliance (and even what constitutes compliance), but it’s reasonable to expect that if a complaint is filed against our organization we will be fined $10,000 per violation and (even more troubling) our medical personnel will be subject to the scrutiny of the state licensing board and may even lose their licenses.”

Last December, several pro-life health care providers won an injunction against enforcement of the law. Olp said they hope for a hearing and decision on the current case within a month; an injunction would stay the law until resolution of the lawsuit, which could take another year or so, he said.

Because the pregnancy centers are not willing to comply with the law, they won’t be able to continue to operate if the lawsuit isn’t resolved in their favor, Olp said. Which is exactly what proponents of the bill want, he added.

“It’s a pro-abortion law that wants to stymie and eliminate pregnancy resources centers’ message to women who are considering abortion.”

There are more than 90 pregnancy resource centers across Illinois.

Lawmakers could vote any time on Illinois House Bill 40, which would allow taxpayer dollars to be used to pay for abortions. If approved, the legislation, sponsored by Rep. Sara Feigenholtz (D-Chicago), would provide abortions for women covered by Medicaid for any reason at any point in their pregnancy. The bill also would allow abortions to be covered under state workers’ health insurance plans.

Current state law only allows Medicaid coverage for “medically necessary” abortions or those in the case of rape, incest, or to protect the life of the mother.

Emily Troscinski, executive director of Illinois Right to Life, estimates that if HB 40 is approved, it could increase the number of abortions in Illinois by 12,000 a year.

• Allows abortion to remain legal in Illinois should the U.S. Supreme Court overturn Roe vs. Wade, and

• Removes language from Illinois law that states “the unborn child is a human being from the time of conception…and is entitled to the right to life from conception.”

“We have to ask ourselves what kind of cultural narrative this is creating in Illinois,” Troscinski said. An unborn child is considered a person in homicide laws, she explained, but now some are pushing to take that provision out when it refers to abortion.

Rep. Sheri Jesiel (R-Winthrop Harbor) told the State Journal-Register she takes “great exception to the section that removes the personhood of a baby.” Jesiel is a member of the Human Services Committee, which approved HB 40 by a 7-5 vote on Feb. 8.

The bill currently is awaiting a full vote by the Illinois House of Representatives. Illinois Right to Life is encouraging people to contact their state representatives and urge them to vote “no” on the bill.