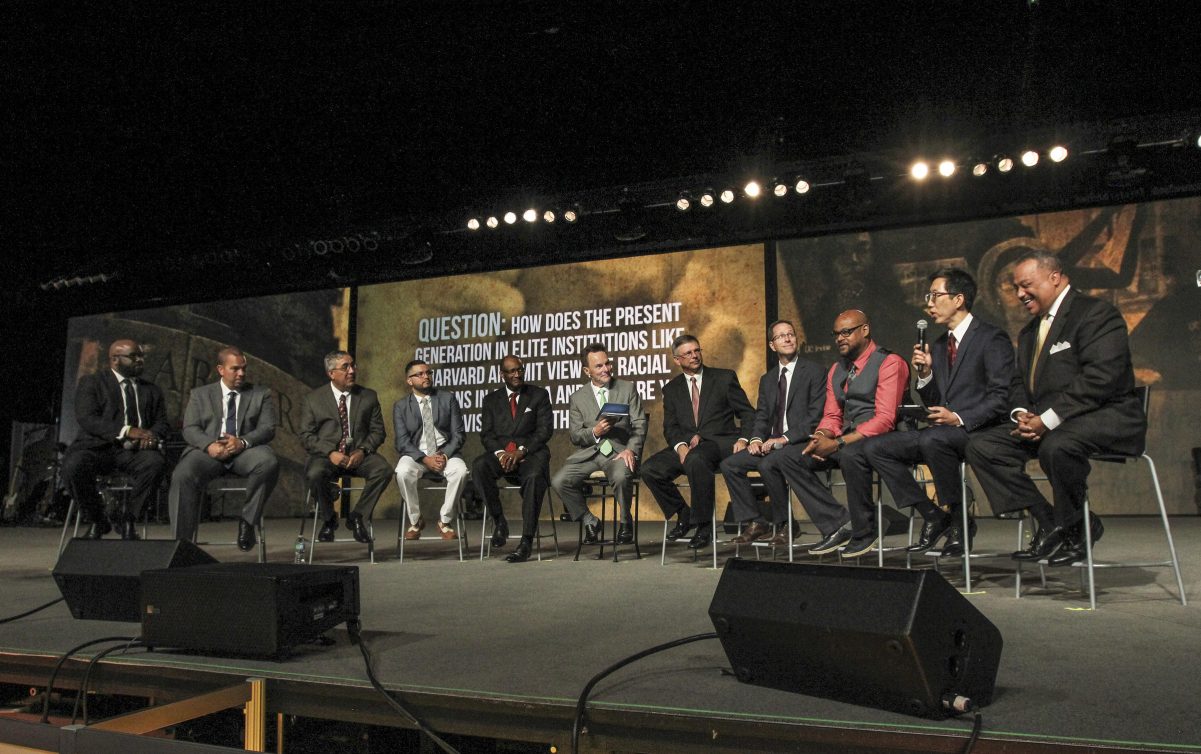 The Southern Baptist Convention rejected use of an iconic Southern emblem, the Confederate battle flag still commonly seen in the South, because it is for many representative of slavery and ongoing racism against African Americans. The resolution states: “We call our brothers and sisters in Christ to discontinue the display of the Confederate battle flag as a sign of solidarity of the whole Body of Christ, including our African-American brothers and sisters.”

Its passage by a considerable majority was met with enthusiastic applause.

The vote came after an impassioned plea by Georgia pastor and former SBC President James Merritt, himself the descendent of two Confederate war veterans.

“Make no mistake, this is a seminal moment in our convention,” said Merritt. “I believe God has brought the SBC to both the kingdom and our culture for such a time as this. What we do today with this issue will reverberate in this nation, not just today, but I believe a hundred years from now. This is not a matter of political correctness, it is a matter of spiritual conviction and biblical compassion.”

Merritt proposed an amendment which strengthened the resolution, and removed a phrase some had used about “honor(ing) their loved one’s valor.” He substituted language to “discontinue the display of the Confederate battle flag as a sign of solidarity of the whole Body of Christ, including our African-American brothers and sisters.”

The amendment passed. While not all messengers who spoke supported the resolution, the will of the Convention was clear: Southern Baptists have broken with the racism of their past. After statements in 1995 and the election of an African American president in 2013, some expressed hope the sins of the past are repudiated as well as the flag.

SBC President Ronnie Floyd chose the St. Louis convention, just a few miles from Ferguson, Missouri, as the place to discuss racial reconciliation. Convention week began with outreach ministry in Ferguson, site of riots in 2014 following the police shooting of a black teenager.

Floyd told convention messengers, “America is…experiencing a racial crisis. Any form of racism defies the dignity of human life. Regardless of the color of human skin, God has put his imprint on each of us…Racism is a major sin and stronghold in America.”

Floyd staged a panel discussion, a rarity in SBC business sessions, called “A National Conversation on Racial Unity in America,” with 10 leaders.

“I am absolutely, totally convinced that the problem in America can be put totally at the doorsteps of our churches,” said Jerry Young, president of a mostly African American denomination, the National Baptist Convention.

Young noted Christ told his disciples to be the salt and light of the world, and he said Christians are failing in the task. “I challenge you to know that the problem in America is a problem with the church being what God called it to be….Here’s what needs to happen in America: Somebody needs to pass the salt and turn on the lights.”

The panel discussed the killing of nine people at Emanuel AME Church in Charleston, South Carolina last year. “That racially motivated murder hurt all of us,” said Marshall Blalock, pastor of the mostly white First Baptist Church in Charleston. “The white community for the first time began to understand.”

Blalock noted, “The killer was a terrorist, he wanted to create fear and cause hopelessness. But he went to church where there is no room for fear, or hate, or hopelessness…Only the gospel can eliminate racism.”

Kenny Petty, pastor of the Gate Church in St. Louis, said incidents such as the Charleston church shooting and police shooting of Michael Brown in Ferguson, Mo., exposed an infection. “That wound opened up and it reeked.” Since the shooting, “there has been some healing (in Ferguson), but we’ve got a long way to go. We found out that infection didn’t just stop with the culture, it went on to the doorstep of the church.”

“What we need is the mind of Christ,” Young said. “If we want to change racism in our churches and America we’re going to have to change our attitude through Christ.”

“We watched a denomination founded by slaveholders vote to repudiate the display of the Confederate battle flag in solidarity with our African American brothers and sisters in Christ,” Moore said.