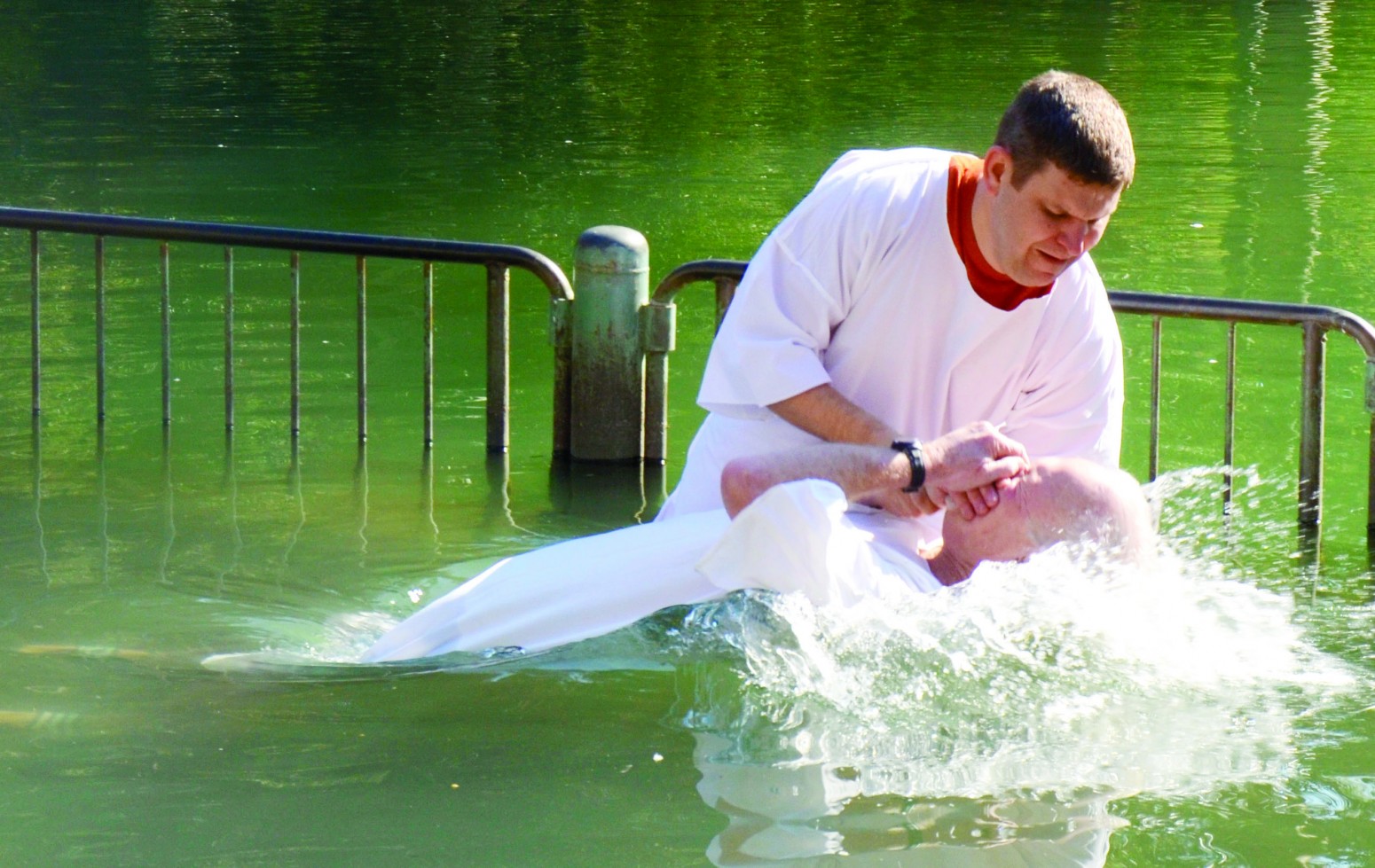 In the Jordan River where Jesus was baptized, Pastor Sammy Simmons of Immanuel Baptist Church in Benton baptizes Don Cruz, a deacon at his church. Photop by Lindsay McDonald

Illinois | Until recently, the man who accepted Christ at Cross Church a few weeks ago was a skeptic. He was moral and hard-working, said Pastor Tim Rhodus, but he just didn’t buy into Christianity. But a few weeks ago, he came to a point of personal faith.

“It wasn’t an evangelistic message in that guy’s case,” Rhodus said. “It was two-and-a-half years of authentic living in front of him, [so] that he saw it was real.”

At Rhodus’ church, which has campuses in Carlinville, Staunton, and Hettick, evangelism is a way of life—of living, actually. Cross Church offers evangelism training a few times a year where participants learn tools to share their faith, but mostly, they’re encouraged to reflect Christ in their everyday lives.

“It’s not a gimmick or a program,” Rhodus said. “It’s normal people choosing to reflect Jesus in their normal lives. And then God uses that to draw people to himself.

“All you have to do is just not be afraid to have the conversation.”

According to a 2016 survey by LifeWay Research, 79% of unchurched Americans say they don’t mind if their friends talk to them about their faith. But only about one-third of unchurched people say they’d go to a worship service if a friend invited them.

As people grow less and less connected with the church as an institution, the numbers show that churches are finding it more difficult to reach people with the gospel. IBSA churches baptized 3,953 people in 2016, a decrease of 10% from the previous year. And 352 churches reported no baptisms for the year.

“This is the lead strategic concern we should have as we try to help churches,” IBSA Executive Director Nate Adams said of the decline in baptisms.

While possible solutions abound, Rhodus and other leaders have seen people come to Christ through lifestyle-oriented evangelism, a method which has gotten a bad rap when used an excuse to not have difficult conversations. But Rhodus explained Cross Church’s philosophy this way: If you’re a mom, you don’t have to fake being a mom. You are a mom wherever you go. You talk openly about it, you’re proud of it. It’s who you are.

“How we try to teach it here is that following Christ ought to be just as authentic.”

The decline in baptisms isn’t just a problem in Illinois. Nationally, baptisms in Southern Baptist churches fell 3.3% in 2016 from the previous year, and the total has fallen eight of the last 10 years, according to data from LifeWay Christian Resources. In an informal Twitter survey last summer, LifeWay President Thom Rainer asked why many churches are less evangelistic than they once were. The top response: “Christians have no sense of urgency to reach lost people.”

Tim Rhodus agrees. “If people aren’t coming to Christ, we should be broken-hearted,” he said. “If there’s a budget crisis (at the church), we call a timeout and have big meetings about budget crises. We don’t have big meetings [if] nobody got baptized in a while, because nobody wants to own that.”

Even with an evangelism method focused on living out one’s faith naturally, it can be difficult to know what to talk about when the opportunity arises. Hart encourages people to start with their own story.

“Our testimony should be the easiest story we know how to tell,” he said. “It should be like the back of our hand.” And not just the moment we were saved, Hart said, but how God led us to that moment, and what he’s done in our lives since then.

“My wife and I have always made it a practice when we go out to dinner to say to the waitress, ‘Hey we’re going to pray for our meal in just a minute. How can we pray for you today?’” That’s one way to do lifestyle evangelism, which Pajak also calls “conversational evangelism.”

“You start a conversation with someone and you make it plain that you are a Christian and that you have a concern for that person. It’s the way I live my life publicly before somebody else so that they say, ‘There’s something that they have that I want in my life.’”

While evangelism tools and training resources can be helpful, when an opportunity is presented to share the gospel, a memorized presentation isn’t required, Pajak said.

“I’ve used part of the Roman Road, along with the F.A.I.T.H. presentation, a few things I learned from Evangelism Explosion, and some Continuous Witness Training. In other words, you don’t need a canned approach that’s been carefully memorized, but rather a desire to help those who’ve never heard the story of why Jesus died and rose from the dead, and how he can change their life for all eternity.”

At Cross Church, Tim Rhodus encourages his church members to live evangelistically by authentically, accurately representing Christ. “You be you,” he advises them. “Let Jesus be himself in and through you. And then all the other things fall into place.” After all, the man who recently came to faith at Cross Church was drawn by watching the Christians around him live authentically.

“Increasing baptisms is more about the spiritual temperature in the room,” Rhodus said, “and whether the people are good reflections of [Christ] from Monday to Saturday.”

A 2012 LifeWay Research survey found that while 80% of people who attend church at least once a month believe they have a personal responsibility to share their faith, 61% had not told someone how to become a Christian in the previous six months. And 48% hadn’t invited anyone to church in the same time period.

While a pastor isn’t solely responsible for reinvigorating evangelism in his church, he does have an integral part to play, Pajak said. He gave an example of pastor who’s able to stand before his church on Sunday morning as a couple walks down the aisle who he personally led to Christ. As pastors are engaged in evangelism and modeling it before their congregations, it sends a message to their congregation.

“Can you imagine what would happen if we had a couple of thousand people in our churches spread out all across Illinois who took this thing seriously—the Great Commission—and really began to share their faith with friends and neighbors and co-workers and family members? What a difference that could make evangelistically, and in baptisms in our churches,” Pajak said.

Rhodus, whose church has grown from 90 people to more than 600 in his 17-year tenure, said the authenticity he thinks is so crucial to reaching people with the gospel starts at the top. Like the apostle Paul wrote in 1 Corinthians: “Be imitators of me, as I am of Christ.”

A church follows its pastor’s example, Rhodus said, and churches that see lives transformed by the gospel are led by pastors who radiate that.