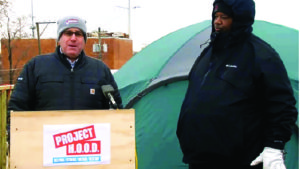 A downstate legislator joined pastor Corey Brooks (pictured far right) in a rooftop tent as a stand against gun violence. During the night, gunfire broke out.

“We were camping out in a tent at the end of this platform last night,” said State Senator Darren Bailey (R-Xenia). “At two o’clock in the morning we heard gunshots. These gunshots were less than a hundred yards over. I’m laying there thinking, okay that surely was something else. About fifteen minutes later I heard a female voice screaming ‘He’s been shot.’”

Bailey, who is a candidate for governor, said gun violence is not limited to Chicago. “It’s taking place in Champaign, Decatur, all over the state,” Bailey said. He called on Gov. J.B. Pritzker and Chicago Mayor Lori Lightfoot to work with local non-profit organizations such as Brooks’s Project H.O.O.D. to end the violence.

Brooks, pastor of IBSA-member New Beginnings Church, first camped on a rooftop to urge demolition of a dilapidated motel that was a center of crime in the area.

Brooks climbed on the roof Nov. 20 for an anticipated 100-day stint. This time he wants to raise funds to establish a community center on “O block,” named by gang members for a young man who was shot and killed there. His name began with O.