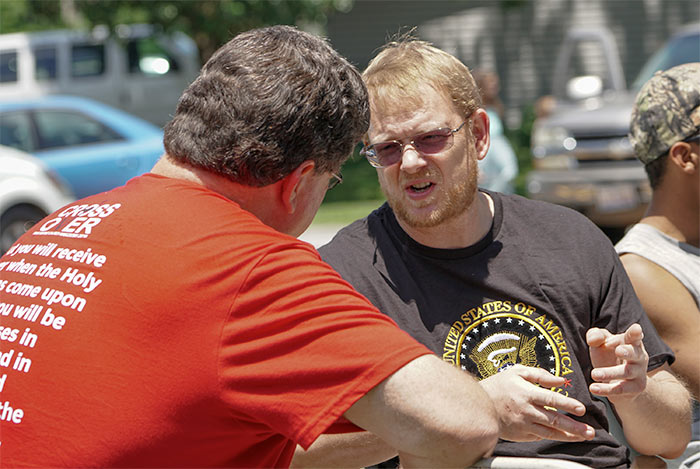 A Crossover volunteer shares the gospel with a local man at FBC Mascoutah’s block party.

Mascoutah | Three months ago, Josef Latham was a self-described agnostic struggling with difficulties he didn’t know how to handle. He asked a friend what he should do, and she advised him to pray, believing God would hear him.

Her advice eventually led him to First Baptist Church, Mascoutah, where he accepted Christ during the week after Palm Sunday and was baptized on Easter.

On Friday, June 10, Josef shared his testimony at a community worship service hosted by the church as part of Crossover, the evangelistic outreach held before the Southern Baptist Convention each year. Mascoutah’s youth group spent the week painting pavilions at a local park and starting conversations with pool-goers and walkers.

They had some 300 conversations during the week, said youth pastor Matt Burton.

“I know that the person I was before I was saved, I would have never ever had the courage to reach out to these people, to speak like I did last night,” Josef said Saturday at a block party culminating the week. “And I think there’s absolutely no way that it wasn’t Him.”

Burton started planning for the church’s Crossover project late last year. The youth group has participated in World Changers projects the past several summers, so Burton planned a mission week based on that model: community service projects in the morning and worship in the evening, with evangelism training—based on the “3 Circles” guide to starting gospel conversations—in the afternoon.

When the church started sending teams to World Changers four years ago, Burton said, “We wanted to teach the kids that missions can be local.” This year, they decided to stay even closer to home.

“After four years and with the Convention coming to St. Louis, we said, ‘Let’s do something in Mascoutah,’” Burton said.

On Saturday, around 80 volunteers ran two outreach events simultaneously at the church: the block party, situated mostly under shade trees offering respite from the heat, and a health fair with 20 vendors inside the church building. A small mission team from Sedalia, Mo., partnered with the students throughout the week, and Eternity Baptist Church in Centralia, Ill., sent volunteers to help with the Saturday outreach.

Crossover is one part of an Acts 1:8 missions strategy Burton and Pastor Duane Smith have put in place at FBC Mascoutah. “Praise God, the kids have great missions minds,” Burton said, describing how many students have participated in domestic and international mission projects. “It’s really exciting just to see the boldness of some of these kids,” Burton said. Like 11-year-old Gracie Wood, for whom Mascoutah Changers and Crossover was her first ever youth event. At the beginning of the week, Burton said, she was tentative and shy. But by the last day, she was approaching people to ask how she could pray for them.

“I have no doubt some of these kids, whether they’re in vocational ministry or not, are going want to do mission trips, are going to share the gospel.”

Josef Latham is already doing that. Taking time away to serve with his youth group all week strained some of his old relationships, he said, but he had the opportunity to encourage one of his friends to pray, just like someone told him once. And while he’s still working on how to start conversations that lead to the gospel, he was joyful for the opportunity to share his salvation story with his youth group.

It’s like youth leader Bonnie Bodiford told him: “You are the gospel now.” Jesus’s love for people made manifest in Mascoutah, and a story to tell there and beyond.