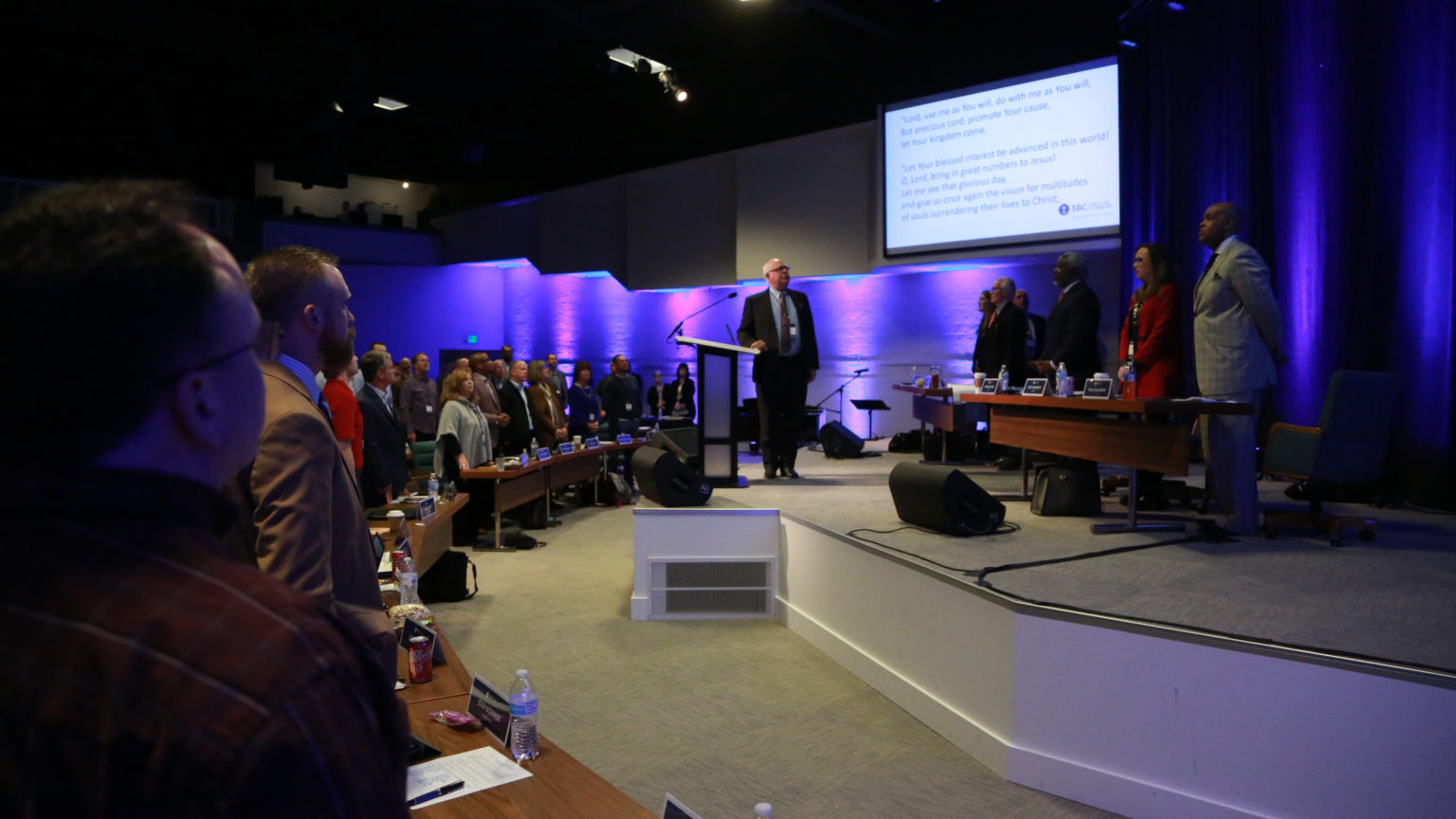 Framed with prayers, sermons and renewed relationships, denominational business was the focus for 66 members of the Southern Baptist Convention Executive Committee gathering in Nashville for a regularly scheduled meeting Feb. 21–22. Two of the now 68-member board were not in attendance.

While the opening plenary session showcased interim president and CEO Willie McLaurin (read story here), the second day allowed members to see him in action from time to time during the lengthy business sessions.

SBC President Ed Litton also shared a challenge to EC members (read story here) the evening of Feb. 21 and an update on the Sexual Abuse Task Force (read story here) during the Feb. 22 morning plenary session. However, most of the morning session time revolved around nominating and voting on members of the new presidential search committee (read story here).

The EC’s four committees then presented a long list of recommendations during the afternoon session, following a roughly two-hour executive session/working lunch.

Following the executive session, Slade announced the EC had come to a resolution with Jennifer Lyell related to the mishandling of her sexual abuse claims (see details in this story) and issued an official apology to Lyell.

Coming from the EC committees were a total of 26 items.

The Committee on Convention Finances and Stewardship Development, led by chairperson Archie Mason of Arkansas, brought 14 reports and recommendations before the EC trustee board. All were approved.

–Six of the items dealt with the Cooperative Program allocation and SBC operating budgets, with four of those focused on the routine annual review of the previous year’s final report and first quarter of the current fiscal year. Trustees also approved a proposed 2022–23 SBC CP allocation budget of $192.27 million, a slight increase from the current year, and a proposed 2022–23 SBC EC and SBC operating budget of $8.335 million, a slight decrease from the current year.

–Two items dealt with the 2021 audit of the EC. While auditors issued a clean, unqualified/unmodified opinion on the financial report, they added a note acknowledging possible unknown future financial liabilities related to the sexual abuse investigation.

The EC does not use non-disclosure agreements, Mason said, adding it has on occasion used confidentiality clauses in severance packages and other personnel matters.

–The final two items from this committee dealt with needed additional funding (from $2.1 million to $4 million) related to the sexual abuse investigation (read story here). Joe Knott was the only registered dissenting vote.

The Committee on Convention Missions and Ministry, led by chairperson Andrew Hunt from North Carolina, presented eight items of business for consideration by the full board.

Six of the eight came as referrals from the SBC Annual Meeting last June.

–To address the three SBC referrals focused on the SBC Resolutions Committee — whether it should exist, asking for early release of resolutions for messengers to review and questions about amendments to resolutions — Hunt and the committee suggested more time to review.

EC members approved the creation of an ad hoc committee to study the resolutions process with a goal of reporting its findings to messengers attending the 2023 SBC Annual Meeting. An update to messengers will be shared during the 2022 meeting.

–Two referrals dealt with changing the name of the SBC. The committee’s recommendation to decline the request was approved by the EC after some debate. A motion from the floor by Litton to amend the recommendation to delay the decision and appoint a study committee was voted down.

“You cannot change history just by changing the name,” Hunt said. “The only way forward is to not change our name but to change our behavior.”

A request to move the assignment from Lifeway (which does not receive CP funding and thus has no budget available to sponsor meetings for the national network of collegiate ministers) to NAMB (which does receive CP funding and has resources available for the network) was voted down by messengers to the 2022 SBC Annual Meeting, so the current request is to “add” rather than “move.”

Because NAMB has the ministry assignment of evangelism, it “has been involved with collegiate evangelism and mobilization for a number of years,” NAMB spokesperson Mike Ebert shared with the EC. “We already have a collegiate church planting strategy … and what we want to add to that now is to offer training for collegiate ministers who want it and build a stronger sense of brotherhood. … We want to give them a home (from a national perspective).

“We are very clear on where our lane is here,” he added in reference to a concern raised about how the move would impact state conventions.

McLaurin also noted, “Collegiate ministries are highly supported by our state conventions. … The work primarily takes place with state conventions. NAMB is coming alongside and undergirding with more support … not taking away, just adding.”

–In other missions and ministry items, Hunt reported his committee did not yet have a candidate to fill a vacancy on the Credentials Committee but did fill a vacancy on the Order of Business, adding Palmer Williams from Tennessee. The committee also approved the election of two trustees to the Southern Baptist Foundation board and recommended the dissolution of a task force that had been created in recent years to review the process for entity trustee removal prior to their term ending. All of these were approved by the full board.

The Committee on Convention Events and Strategic Planning, led by chairperson Erik Cummings of Florida, recommended approving contracts with C. Barry McCarty and Al Gage to serve as parliamentarians for the 2022 SBC Annual Meeting as well as providing the traditional $100,000 meeting hall expense for the Southern Baptist Pastors Conference. Both were approved by the full board.

The Committee on Southern Baptist Relations, led by chairperson Jim Gregory of Idaho, approved recommendations and amendments for the SBC Calendar of Activities as well as a statement concerning best practices for SBC officer nomination speeches. Both items were approved by the full board.

In other business, trustees approved general administrative matters related to the EC, including a post-employment agreement with former CFO Jeff Pearson, a revised salary structure for existing employees and updated information related to names and authorization of signatures on corporate accounts.

– Jennifer Davis Rash and Margaret Colson for The Baptist Paper.