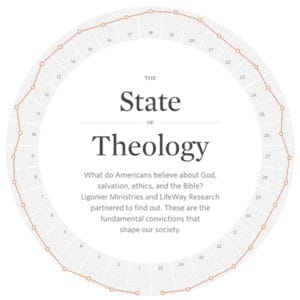 The 2020 State of Theology survey, released in September by LifeWay Research and Ligonier Ministries, had both good and bad news for churches seeking to share the gospel in a culture moving farther from it.

First, the good: 65% of Americans agree God is a perfect being and he cannot make a mistake. A similar percentage agree the bodily resurrection of Jesus really happened. And over half agree God counts a person as righteous not because of his or her works, but only because of faith in Jesus Christ.

Now, the challenges: More than half of Americans say religious belief is a matter of personal opinion (although the percentage is down from 2018). Almost two-thirds say people are good by nature. And just over half agree Jesus was a great teacher, but not God.

That question also elicited a troubling response from evangelicals: 30% agreed at least somewhat that Jesus was a great teacher, but not God. The finding shows “a significant need for Christians to be taught Christology, the doctrine of the nature and identity of Jesus Christ,” Ligonier said.

It also may show a connection between church attendance and belief, said LifeWay’s Trevin Wax. In a blog post about the research, Wax noted attendance appears to matter more than affiliation. “Those who claim the evangelical label and also attend church at least once a week were much more likely to have beliefs that align with Christian orthodoxy,” he wrote. Wax noted 76% of evangelicals who attend church at least once a week disagree Jesus was a great teacher but not God. But among evangelicals who attend church less often, only 42% disagreed.

That’s more good news and bad news for churches: it’s encouraging that Christians appear to grow in their knowledge and embrace of Christian orthodoxy while at church. But it’s also a particularly tricky time to be a churchgoer, as some gatherings are still limited due to the COVID-19 pandemic.

More Americans disagree than agree that churches must provide entertaining worship services if they want to be effective (49% to 37%), giving churches an opportunity to hone in on meaningful worship, even if it happens online for now.

A few statements in the survey garnered 100% agreement from evangelicals, who expressed a high view of the Bible’s authority and affirmed that Jesus’ death on the cross is the only sacrifice that can remove the penalty of sin. The survey also found 100% of evangelicals agree strongly that it’s very important for them personally to encourage non-Christians to trust Jesus Christ as their Savior.