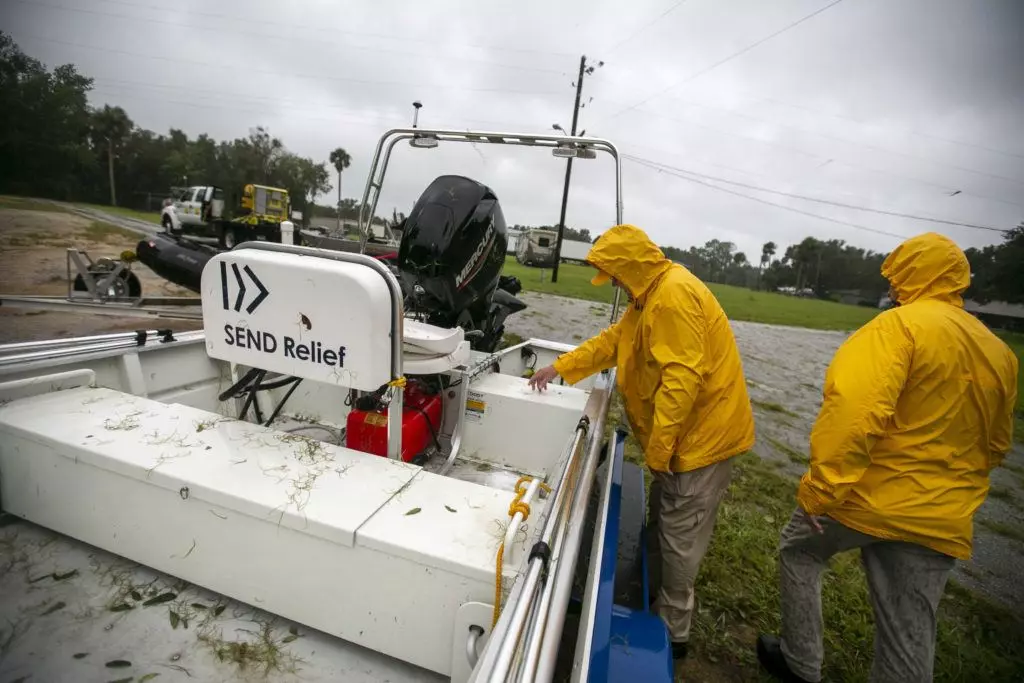 Southern Baptist Convention rescue teams from North Carolina and Tennessee stage at Lake Yale on Sept. 29 in Leesburg, Fla. The teams will spread out across southwest Florida to aid in the recovery from Hurricane Ian. Photo by Alan Youngblood

Rob Heath had a lot to do today in preparing for Hurricane Ian and a direct knowledge of the unfortunate timing of its arrival to the South Carolina coast.

“We’re hearing that it may get here around midday tomorrow,” he told Baptist Press as another weather alert went off on his phone. “That’s going to coordinate with high tide, which unfortunately, is a little bit higher now because of the moon phase.”

Heath, pastor of Redeemer Fellowship Church, is like many who live on Edisto Island. He’s not technically from there, but lived for 40 years with his wife Vicki in nearby Charleston, serving as a pastor for about 25 years.

Edisto Island is one of South Carolina’s Sea Islands, with a maximum elevation of eight feet. It is accessible by only one bridge, located on its north side.

“We’re checking on everyone today and seeing who needs rides [out],” Heath said. “I’m also keeping in touch with the town to let them know who is staying for any help we can provide afterwards.”

Further up the coast, First Baptist Charleston has canceled activities through Saturday.

Blalock told Baptist Press. “We continue to pray for our friends in Florida who suffered the worst of the hurricane.”

Blalock was in the process of completing an International Mission Board trustee meeting in Richmond, Va., with plans to arrive home this afternoon.

Ian made landfall Sept. 28 in the Punta Gorda/Cape Coral area as a Category 4 hurricane with sustained winds of 145 mph. A “catastrophic” storm surge, winds and flooding came with it, the National Weather Service said.

Losing strength as it passed over land, Ian was eventually downgraded to a tropical storm prior to its emergence over the Atlantic, at which point it will gather strength again. That led to a hurricane warning issued at 10 a.m. Eastern time today for the South Carolina coast.

A minimum of 100,000 meals a day will be produced by SBDR volunteers scattered across at least seven locations beginning Oct. 3. More kitchen units will be deployed if there is a need for more meals. Chainsaw and flood recovery teams stand ready to respond to upcoming work requests.

Supplies and volunteers will continue to be sent into the area as needed over the coming months, the spokesman said.

Thursday (Sept. 29), a semi-truck filled with bottled water, temporary roofing, Shockwave mold cleaner and other emergency supplies was dispatched to the affected area. A Send Relief rescue boat is also being deployed for the first time today for search and rescue missions.

“Thankfully, the worst has passed,” he said.

Early in the week First Baptist leadership coordinated a response that not only addressed preparation before Ian’s arrival and the aftermath, but also how prayer can be a continual presence.

“On Wednesday, we asked all in our church family to set an alarm at 4:07 p.m. to join us, from wherever they were, as we paused to ask God for His protection and safety for our state and city,” Robinson said.

407 is the main area code for the Orlando area.

“All on-campus activity was paused from Wednesday through Friday,” he said. “While we hope to safely gather this weekend, we will assess any damage at our campuses on Friday and determine the next steps.”

In the meantime, Robinson added, First Baptist’s campus is serving additional purposes including as a shelter for the local court system, staging area for the National Guard, Red Cross special needs shelter and debris processing site for the city’s municipalities.

“We have also mobilized our Care Ministry that has helped our widows and home-bound or mobility-challenged members with preparation,” he said. Other systems in place will assess damage needs and notify teams to respond.