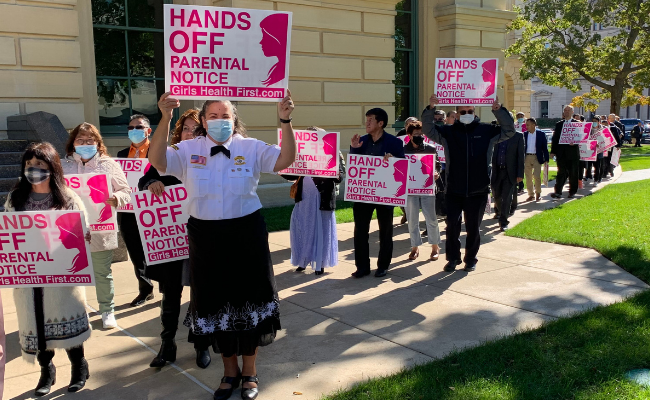 Illinois Right to Life hosted a rally outside the State Capitol in Springfield Tuesday morning hoping to persuade members of the General Assembly to vote against a bill that would repeal the Parental Notice of Abortion Act. Several attended on short notice and held up signs proclaiming, “Hands Off Parental Notice.” But not enough Illinois Senators were persuaded.

That afternoon (Oct. 26), the Senate voted to repeal the Act. The next day, a House committee heard HB 370 Amendment 1, a bill in that chamber seeking to repeal it. The bil’s prospects are less certain in the House. However, Governor J.B. Pritzker has signaled his support for the repeal.

The bill would repeal current state law requiring women under age 18 to notify a parent, legal guardian, or grandparent at least 48 hours prior to an abortion. It does not require permission or approval, only notification. About 1,000 minors in the state undergo an abortion annually, according to Catholic News Agency.

Molly Malone Rumley of Illinois Right to Life was at the rally. Rumley is the organization’s assistant legislative chairman and has “great concerns” about the proposed repeal. She said something as simple as the notification of an abortion is “for the safety of the girl.”

Illinois Parents for the Protection of Girls hosted a virtual gathering last spring when a similar bill was proposed with human trafficking survivor Brooke Bello and expert Laura Lederer. Nine-in-ten trafficking survivors reported having contact with healthcare provider, according to Lederer, with 71% saying they got pregnant at least once while being trafficked. In addition, 55% reported having at least one abortion with 30% undergoing multiple abortions.

Bello testified she raped at the age of 11, sex trafficked at 15, and forced to undergo multiple abortions by her trafficker. “Had my parents been notified, my mother would have [known] what city I was near.” She believes law enforcement could have been alerted, and she may have been rescued sooner.

Rumley said this is an issue the pro-life and pro-choice communities can come together on. She said recent surveys in the state have shown “72% of the pro-choice majority [in Illinois] still think it’s important to keep [parental notice] on books. You can be prochoice and keep still be for notifying for parents.”

Legislators have seized the opportunity to bring up the repeal while emotions are still running high due to the new Texas abortion law, which limits abortions to the seventh week of pregnancy. The U.S. Supreme Court will hear arguments in a case against the Texas law next month.

Rumley said there are three things’ Christians can be doing right now: