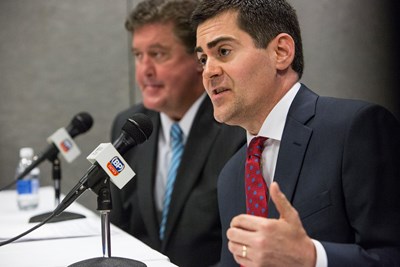 A statement on seeking unity in the Southern Baptist Convention has been well-received after controversy over statements made during the 2016 presidential election by Russell Moore, president of the Ethics & Religious Liberty Commission, led to division in the Convention. The statements were factors in causing some churches, including Dallas area Prestonwood Baptist Church, pastored by Jack Graham, a former SBC president, to begin placing Cooperative Funds in escrow while the body evaluated the situation.

The six-member executive committee of the ERLC and Moore released a statement March 20 titled, “Seeking Unity in the Southern Baptist Convention.” In the statement, Moore clarified the criticism he leveled at Christians who supported Donald Trump for president in the November 2016 election.

In its portion, the ERLC executive committee affirmed Moore’s ongoing leadership as president of the SBC entity. It acknowledged criticisms of Moore and stated “we are convinced that Dr. Moore has sought to be attentive and responsive to those who have brought concerns to him.”

“We realize that divisions do not heal overnight, and as needs arise our Board will be happy to address them. But in terms of leadership and support, Dr. Moore is the man to whom it has been entrusted to lead this entity — speaking prophetically both to our culture and to our Convention. He will continue doing so with the confidence of our support,” the ERLC executive committee stated.

Moore acknowledged that he had spoken “often quite sharply” about Christians who said moral issues and character didn’t matter in the election.

He said he was not intending, however, “to talk about Southern Baptists and others — and there were many — who were open about all of these issues but believed in supporting candidates, however flawed, who would appoint good people and carry out good policies on some issues.”

And he was “not meaning to suggest it was sinful for Southern Baptists or others to advise candidates or to serve on advisory boards in order to bear some influence there,” Moore said. He said close friends were among those “wounded” by “contextless or unhelpful posts on social media about the whirl of the news cycle. I cannot go back and change time, and I cannot apologize for my underlying convictions. But I can — and do — apologize for failing to distinguish between people who shouldn’t have been in the same category with those who put politics over the gospel and for using words, particularly in social media, that were at times overly broad or unnecessarily harsh.”

The statement by Moore and the ERLC executive committee drew praise from Graham and current SBC President Steve Gaines.

Shortly after the ERLC’s statement was released, Graham tweeted, “This is a gracious and unifying statement from [Moore].”

Prestonwood Baptist announced in February it would escrow CP funds over “various significant positions taken by the leadership of the Ethics & Religious Liberty Commission.” Graham had complained previously of alleged “disrespectfulness” by Moore toward evangelical supporters of Trump.

In response to the statement, Gaines told Baptist Press the SBC should put division over the ERLC “behind us” and more forward in support of the Cooperative Program, Southern Baptists’ unified method of funding missions and ministries in North America and across the globe.

“I am grateful for the statement from Dr. Russell Moore and the ERLC executive committee,” Gaines, pastor of Memphis-area Bellevue Baptist Church, said in written comments. “They have been assigned with a very difficult task. Indeed it is impossible to please everyone regarding issues of conviction and conscience…”

“Regarding his work at the ERLC, I have agreed with most of his statements, especially those regarding the sanctity of human life, the sacredness of heterosexual, monogamous marriage and religious liberty,” Gaines said. “However, I have disagreed with some of the statements he made during the election and I especially disagreed with the tone with which he made some of those statements. I have discussed all of this privately with him. He has genuinely apologized for his mistakes and that is good enough for me.

“I believe all of us who are recipients of grace and forgiveness should grant him the same forgiveness that we desire from the Lord. It is high time that we put all of this behind us. None of these matters will prevent Bellevue Baptist Church from continuing our support of the Cooperative Program, the ERLC and Dr. Moore. It is time to move ahead and work together to double our efforts to take the Gospel to our nation and the nations,” Gaines said.

Other churches have taken or are considering similar action over concerns related to multiple SBC entities, according to reports received by the SBC Executive Committee.

EC President Frank S. Page told BP following release of the ERLC’s statement, “I stand ready to assist Dr. Moore in any possible way, and I’m praying for him as he connects with our convention’s various constituencies. I deeply appreciate his intentionality in building relationships within a convention which is truly diverse in many ways. I certainly do and will pray for his receptivity, as he holds such a prophetic role in our convention.”