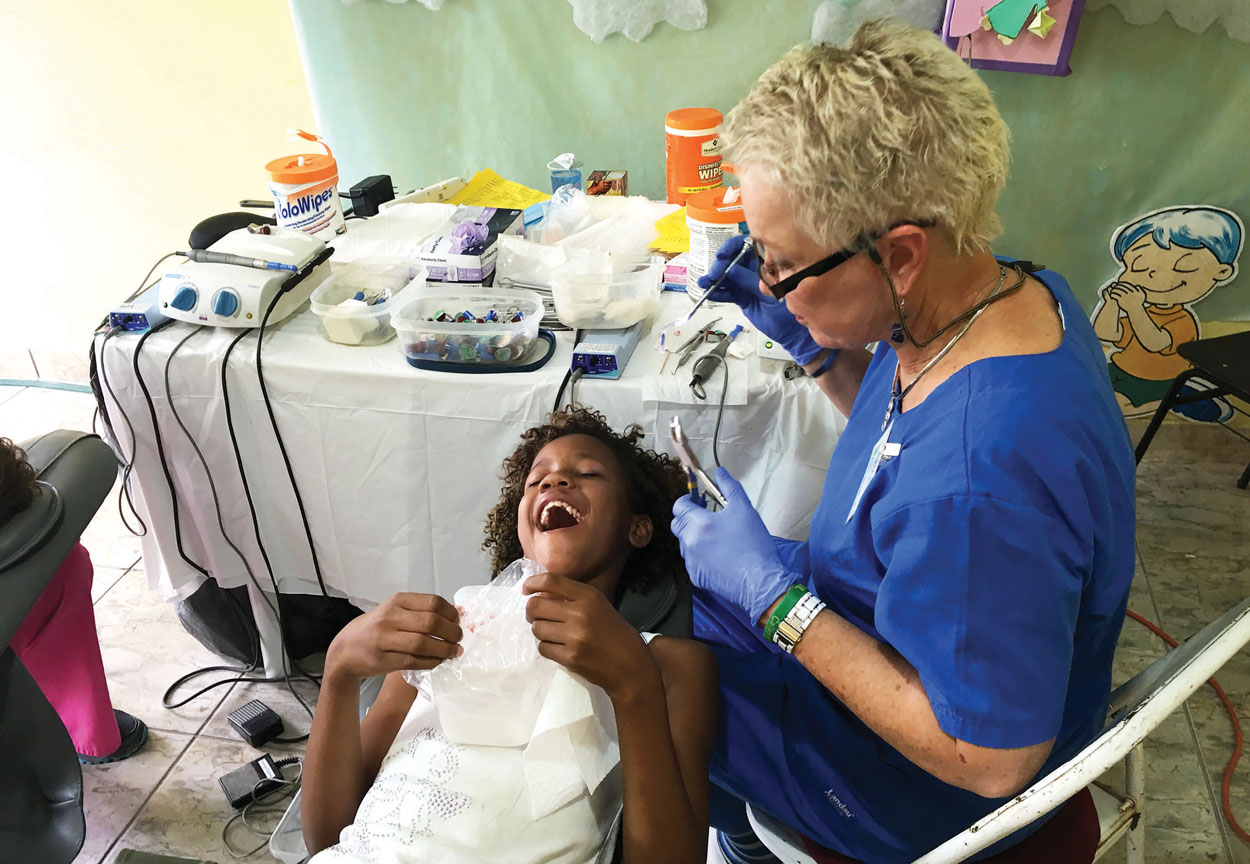 A member of Steeleville Baptist Church’s mission team treats a young woman at a temporary medical/dental clinic in Rio de Janeiro. The Steeleville church was one of many in Illinois that took mission trips this summer to serve local churches.

For one week in June, a church in Rio de Janeiro, Brazil, was transformed into a hospital.

People came to see doctors, pick out eyeglasses, have their teeth cleaned, and fill prescriptions at the pharmacy. They heard the gospel and were prayed for by members of an Illinois church who traveled to South America to serve on behalf of a church there.

“We love identifying churches that have a heart to reach their communities,” said Scott Foshie, pastor of Steeleville Baptist Church. The June 2016 trip was his eighth to Brazil, and Steeleville is the third church he’s led to be involved in medical missions in the country.

Each year, thousands of missions volunteers from Illinois go somewhere – near or far – to intentionally share the gospel and serve with fellow Christians. This summer, they were in Brazil, Honduras, Italy, and Hungary, and many places in between.

Foshie’s church partners with a congregation in Rio de Janeiro each summer to put on a medical clinic. There are medical professionals on the mission team from Illinois, but also some who go as support staff for the clinic and pharmacy. Every volunteer is trained in evangelism.

This summer, they saw 331 medical patients, filled 1,207 prescriptions, extracted 423 teeth, and checked 304 sets of eyes. By the end of the week, 179 people had made professions of faith.

For Foshie, the trips are really about strengthening local churches in Brazil. There is tremendous physical need, he said, but people are open to hearing the gospel. And churches are growing, despite a lack of resources.

As a pastor in Tennessee several years ago, he was leading music at an associational meeting when he heard a dentist speak about mission trips he had taken to Brazil.

“It just grabbed me,” Foshie remembered. “The images on the screen of the people. I just really sensed the Lord calling me to be available to go.”

Now, Foshie is calling others to go with him. The Steeleville church is planning their next trip for Summer 2017.

“A lot of times you think, ‘I’m taking Jesus to somewhere,’ but really, when you get there, you find out Jesus is alive and well, and he’s working, and you find out he wants to reveal himself to you.”

In Honduras, Kay Werner’s mission team saw poverty like many of them had never seen before.

“Members of the team said it was just sometimes too much to take in,” said Werner, who led a group of volunteers from her church, Crossroads in Brighton, to work at a mission in the capital city of Tegucigalpa.

Before they left, Werner’s team watched a video series titled “When Helping Hurts,” about biblical ways to alleviate poverty. And in Honduras, they saw first-hand how much is donated that can never be used—winter coats and ice skates, for example. The Brighton team made it their mission to provide much-needed help and encouragement to workers at the mission.

They assisted with construction projects, but only as support for the local workers, who were mixing concrete by hand, Werner said. “Our purpose right now is not to come and teach them how to do it differently,” she told the team. “We are (here) to support the full-time workers, that’s our purpose.”

In Italy, an IBSA GO Team took a similar approach as they worked on behalf of the only evangelical church in Trieste, a city of 200,000. (For photos from more GO Teams of students and leaders, see page 9.)

The Italy team worked with Pastor Elio Vannelli of Trieste Evangelica to complete a painting project the church has undertaken for three years in a local school. Each June, the church paints one floor of the school. This year, volunteers from Illinois painted the fourth and final floor.

“The school authorities’ confidence in our commitment grew during this time and this year the Lord opened many doors,” Pastor Vannelli wrote in a recent prayer newsletter. “The coordinator of the school asked us to explain to the parents during the final party why we did all this with a generous spirit and service. We could share how our service spirit comes from the generosity, service, and love of Jesus for us.

“We had the opportunity to lay the foundation for contacts and future collaborations during that night. We pray for fruit from these contacts.”

The breakthroughs are “three years in the making,” said GO Team leader Charles Campbell, who has been working with Vannelli to find the most effective ways to help the local church there.

Since the team was in Italy, the painting project has opened doors for an after-school ESL program and a two-week camp where Trieste Evangelica will be allowed to share the gospel.

Richard and Sharon Brummitt first got a vision for doing missions in retirement when their son was serving as an International Mission Board missionary in Hungary. More than 10 years later, the couple from New Song Church in Zion are working to mobilize others in Lake County Association to join them as they help to strengthen Hungarian churches.

The Brummitts were in Hungary this summer to serve alongside a Baptist church in the town of Erd as they hosted a two-week camp at a local school. The camp, which included games, songs, and a daily English lesson, has helped the church build relationships in its community, the couple reported.

At each week’s closing celebration, Pastor Gyuri Varga was invited to speak, and a church member gave a personal testimony.

“This was the fourth year that the church has put on summer camp for the school children,” the Brummitts wrote in a follow-up report on their trip. “The quality of the program and the love shown to the students during the camps has given the church an outstanding reputation in the city, opening doors for future opportunities in their community.”

Lake County Association has entered a three-year missions partnership with Baptists in Hungary, planning to trade mission teams like the one that served this summer.

Going to Hungary “feels like going home” because of the welcome they receive, Sharon Brummitt said. It’s a welcome they hope many more in Illinois will experience in the years to come.

“We would love to have more people join us.”