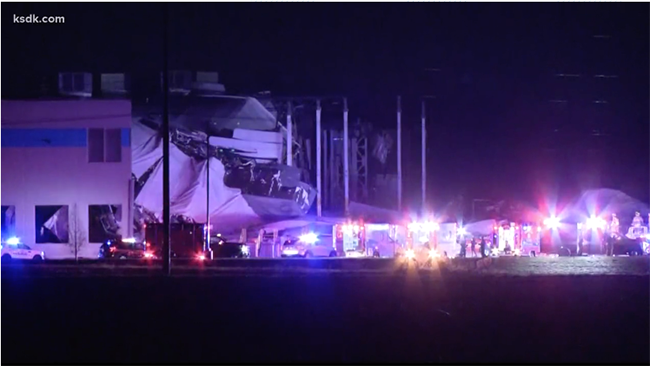 Pastor Stan Ballard noted Monday’s “beautiful weather” as he described the resilience of the 1,500 or so people in Monette, Ark., in the face of death and destruction from unseasonable tornadoes.

“One lady put on Facebook – whose home was destroyed – she said, ‘I’ve lost my home, I’ve lost my car and I’ve lost my furniture,’” Ballard said of a church member, “but she said, ‘I’m still going to win because I’m a Christian and the Lord is going to help us through all of this.’

“It’s just a blessing to see people who look on a home and see it totally destroyed” and still respond positively, Ballard said, “as if to say, ‘We’re not losers. We’re still winners because we have our life and we have the Lord.”

Ballard is the only Southern Baptist pastor in town. In Monday’s sunshine, the son of a First Baptist Church member was out salvaging corn after the tornado ripped the tops off of several grain bins.

The sun shone in sharp contrast to hours before.

More than 30 tornadoes late Friday and predawn Saturday destroyed communities in six states including Arkansas, Illinois, Kentucky, Missouri, Mississippi and Tennessee, killing at least 88 people, according to USA Today and New York Times reports. Most of the destruction and death were in Kentucky, where at least 74 were killed when the town of Mayfield was flattened and areas of Bowling Green were heavily damaged. At least six died when an Amazon distribution center was destroyed in Edwardsville, Ill., and at least four deaths have been counted in Tennessee.

Two died in Arkansas, including a 94-year-old resident of Monette Manor Nursing Home – where five others were injured – and a Dollar General manager in nearby Leachville.

Southern Baptist Disaster Relief volunteers and other church members are already responding to needs in the impacted areas.

In Monette, residents will suffer from the loss of the Dollar General, which was the only store accessible for many low-income residents, Ballard said. The church has for years conducted a Sunday School mission at Monette Manor nursing home, which was destroyed in the storm.

“It was a devastation to our area, but our people are resilient,” Ballard said. At least two members of First Baptist Monette lost their homes, and other homes were heavily damaged. About 10 percent of the church property suffered minor damage, Ballard said, with soffit and some doors removed, and debris scattered across fields.

“We worshiped by serving,” Price said, noting the members’ participation in disaster relief work. “Everybody seems to be pretty upbeat, just able to serve,” Price said. “That’s the big thing. We just want to serve our community.”

Price, who leads one of three Southern Baptist churches in Leachville, knew of no property damage to churches there. A state-of-the-art cotton gin was destroyed in the town.

Ministering to the Edwardsville community

“Friday night we started getting contacts about needing counselors and helpers with family members who are waiting to find out whether their relatives were being evacuated from the Amazon building,” Jaggers said. A home behind the Amazon building was also destroyed, but Jaggers had not received any reports of damage at the nearly 40 Southern Baptist churches in the association.

“We’ve called out about 36 pastors and several of them have responded that they are on call for any help during the rescue and recovery process,” Jaggers said. “At this point, I think everything is pretty much in control here. Kentucky is our biggest concern right now.”

As a chaplain who has served after many storms in several states, Jaggers is often at a loss for words of comfort.

“Natural disasters, there’s no really good answer to give to anyone,” he said, “except God is sovereign, and I’m not sure really how much that helps. But just to love on them.

“The biggest thing we teach our pastors and chaplains is what we call the ministry of presence. And that is to just be there. Sometimes you don’t have to say a word.”