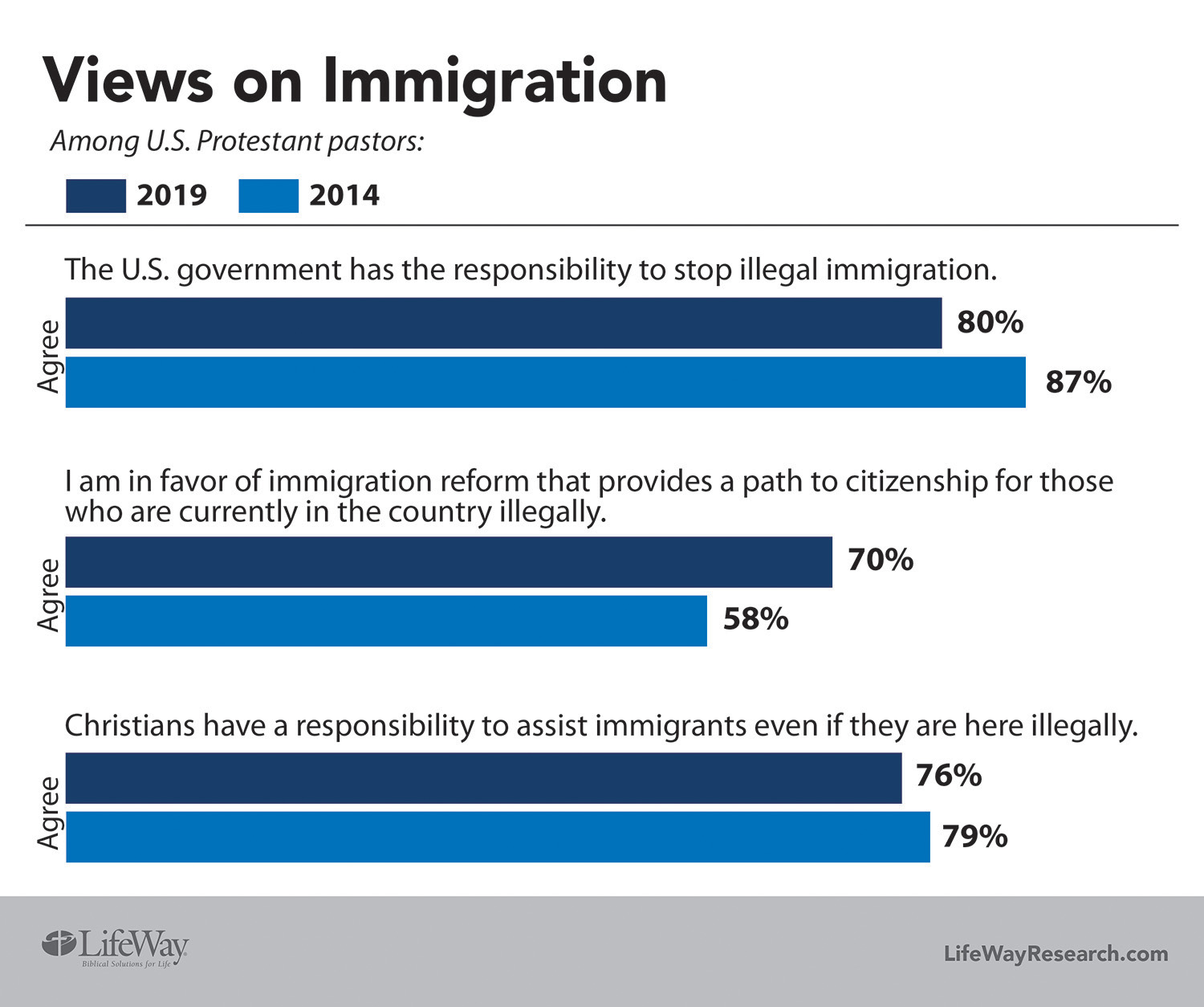 As U.S. lawmakers continue to debate the best approach to illegal immigration, most Protestant pastors say the solution should be multifaceted, according to a study by LifeWay Research.

Researchers surveyed 1,000 Protestant pastors Jan. 14-30 on their views on illegal immigration and how the church should view those in the country illegally. A large majority—80%— say the government has the responsibility to stop illegal immigration.

“Lawmakers have left many of the bigger immigration questions unresolved often voicing ‘either-or’ positions,” said Scott McConnell, executive director of LifeWay Research. “Pastors don’t seem as conflicted desiring improvement in both border security and a path to citizenship for those here illegally.”

Competing concerns
While 80% of pastors today say the government has the responsibility to stop illegal immigration, that’s down from 87% in a 2014 LifeWay Research survey.

“Among these questions, stopping illegal immigration registers the strongest sentiment from pastors,” McConnell said. “But support for this is now more in line with caring for immigrants already in the country and establishing a path to citizenship.”

“For immigrants in the country illegally, there are no real options for redemption,” McConnell noted. “That doesn’t sit well with pastors—the majority of whom were ready for lawmakers to offer a means of making restitution and gaining legal status years ago.”

Support for immigrants
Compared to 2014, a similar number of pastors say Christians have a responsibility to assist immigrants even if they are here illegally—76% today and 79% then.

• Evangelical pastors are more likely to disagree than mainline pastors (16% to 10%).

Nearly 3-in-10 pastors say their church is currently helping immigrants (29%), while 70% say they are not.

“Pastors place just as much responsibility on their congregations as they do legislators,” McConnell said. “More than twice as many pastors say Christians should help immigrants than say their church is personally involved assisting local immigrant neighbors today.”

– From LifeWay Research, as reported in Baptist Press

While the 2020 SBC Annual Meeting has been canceled for the first time since 1945, Southern Baptists will still be provided with an opportunity to hear from the entities of the Southern Baptist Convention through an online event June 2 hosted by the SBC Executive Committee. SBC Advance, a two-hour online event, is not designed […]