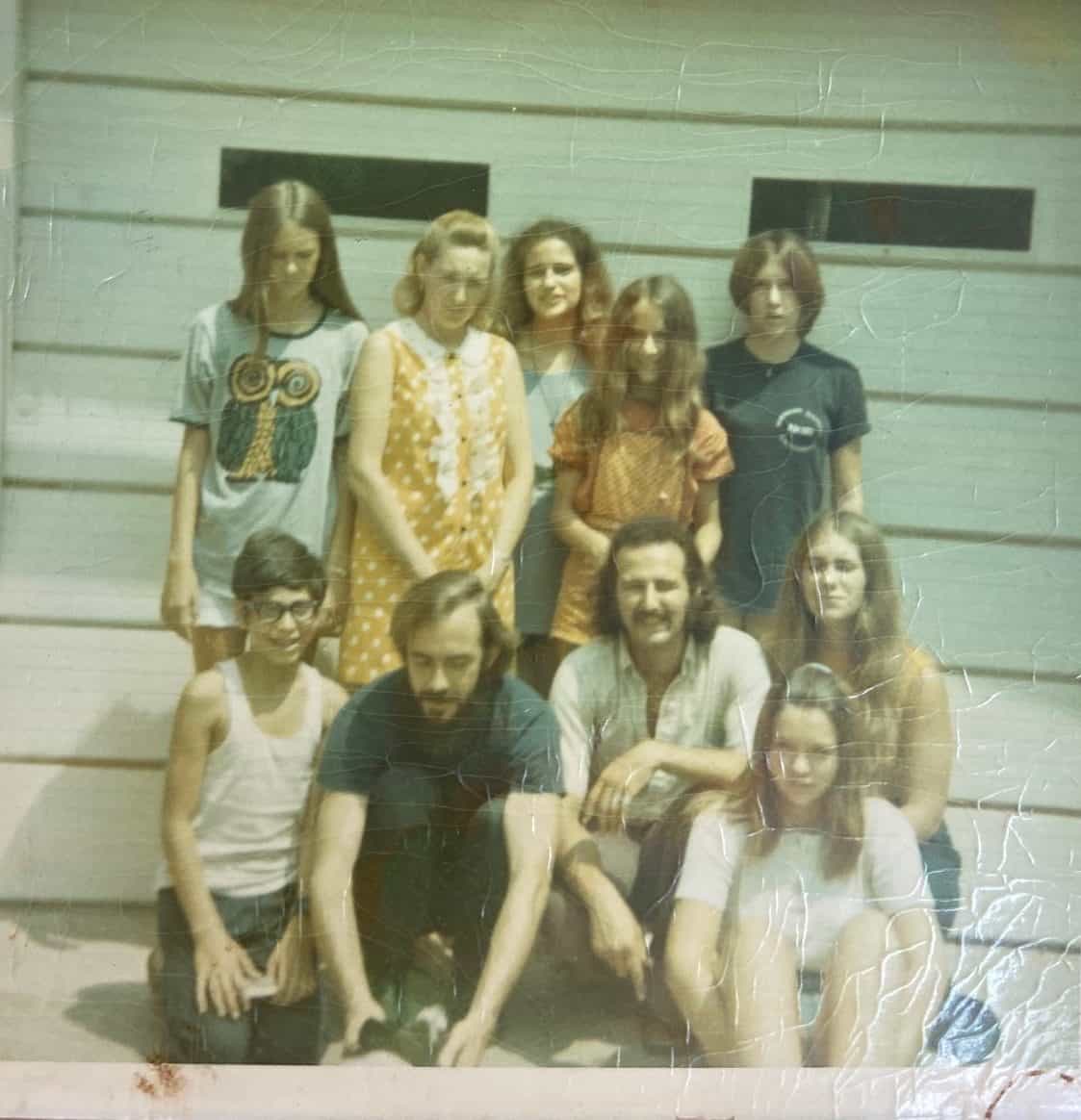 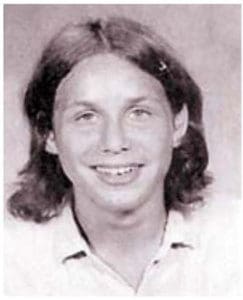 Jeff Lestz walked into the rundown farmhouse expecting to find a den of iniquity. It was the summer of 1971, and the 14-year-old had hitchhiked south to reunite with hippie friends from Chicago who had established a commune of sorts outside Elkville.

He found his friends sitting on the floor, surrounded by books and eating popcorn. They all got up to greet him, he remembers, and invited him to join their Bible study.

“I honestly thought they had just lost their minds,” said the London-based CEO of a financial services firm. What had actually happened to the Cosmic Cowboys Community Band, as they referred to themselves, was an encounter with Barbara Watson.

The mother of three and member of First Baptist Elkville had been praying with her friends for opportunities to reach young people in nearby Carbondale. Then, the Cosmic Cowboys moved into the house a mile from hers. And Barbara went on mission to share Jesus with them, said Lestz, pictured above when he arrived in Elkville.

Instead of going somewhere else to reach the hippies, God had brought the hippies to her.

Counterculture moves in
Bill and Barbara Watson were living in a home owned by an uncle who had asked them to move in and take care of it while he was away several years for work. The uncle thought he’d be gone for 15 years, but it turned out to be only three—three very pivotal years, said Cheryl Russell, the Watsons’ middle daughter.

“It was God’s perfect timing that put Mom at that house at that time, to meet these kids and to help these kids.” The Watsons’ daughters sometimes tear up when talking about their parents’ ministry to the hippies. Bill died in 2008, and Barbara in 2016.

Their oldest daughter, Debbie Knight, was a junior in high school when her family’s relationship with the hippies started. “I thought it was the coolest thing ever,” she said, acknowledging that she probably didn’t realize the drug culture associated with them. At first, the Watson daughters said, their parents differed on how to interact with the new neighbors.

“Dad wasn’t too happy to begin with,” Cheryl said. The sisters remember their mother giving rides to hippies hitchhiking into Elkville. “Her excuse was that they didn’t get into the truck with us,” said youngest daughter Katie Ritter. Instead, they rode in the back.

In the conservative, rural community, parents were trying to shield their children from the sex, drugs, and rock ‘n roll coming out of Carbondale, Lestz said. “You’re trying to keep your kids sheltered, and all of a sudden, it moves in right next door.”

Barbara was worried about her new neighbors, but not for the reasons other people would have been. One bitterly cold night, the Watson family was surprised to see some of the Cosmic Cow-boys peering through their window. Their mother brought them in, Katie said. “She said they had no food, no wood for a fire, and they were cold and hungry.”

Barbara settled them in the family’s basement, and started cooking. She played recordings of Christian music for them. She talked about Jesus.

“They saw through the drugs and the long hair and the rebellion and all that,” Lestz said of Watson and those who reached out to the hippies in the early days, “and they just saw some people who needed love.”

Reaching out to the hippies gave her family the greatest year of their lives, Barbara later wrote in a column for Baptist Press. “We can hardly believe what happened.”

A town turned upside down
Through the witness of Barbara and others like her, most of the Elkville hippies met Jesus. Which is why they were holding a Bible study when Jeff Lestz arrived at the farmhouse.

The Chicago teen, raised in the Jewish faith, had lost both of his parents years before, and bounced around from one difficult situation to the next. In Elkville, another hippie eventually be-came his foster father, but if that hadn’t worked out, the Watsons were prepared to take him in. 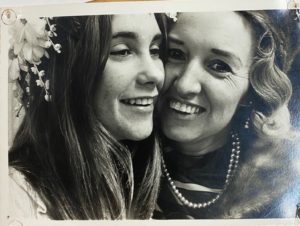 Barbara Watson celebrates the wedding of a young woman named Helene (left), who moved out of the hippie commune and into the Watsons’ home following her conversion to Christianity.

They had done the same for a couple of the young women at the commune, who realized after they became Christians that they shouldn’t be living with men. So, they moved into the Watsons’ basement for a while.

Bill Watson had experienced a turn-around on the hippies, his daughters said. Early on, he had threatened to rent their home out from under them. But later, he protected the hippies when some ill-intentioned former acquaintances came looking for them in Elkville. Not everyone was ready to accept the hippies living in the house with no running water, though. Their appearance, hygiene, and basic way of living was foreign to many in the Watsons’ small town. Elkville hadn’t changed much in years, Debbie said, and most residents were related to each other.

“And then in walks something like this,” she said. “It turned it upside down, and people were scared.”

Barbara herself described the disconnect in the Baptist Press column. “They were dirty,” she wrote. “They wore big boots, caked with mud. You can imagine how they smelled, since they would go up to two weeks without a shower.”

Her daughters said Barbara’s ministry to the hippies cost her. Her determination to build relationships with them caused friction in personal relationships. Customers who once bought Avon beauty products from her stopped coming to the door when she rang the bell.

“But then we look at what we gained by knowing the hippies,” Cheryl said. “We’re always afraid of people who are not like us, and to find out they were people too…God loved them just as much as he loved us.”

Debbie said her family’s ministry back then is something that made her who she is now. “That’s something not everybody gets to witness or see actually happen—how they changed.” She wishes she’d paid more attention to how the estrangement affected her mom.

‘Her story lives on’
Jeff Lestz became a follower of Christ in Elkville, after Barbara’s witness to his friends sparked their witness to him. After he walked into their Bible study, they invited him to church, where he trusted Jesus as his savior. He married Margo, his high school sweetheart, and the two lived in Illinois and Missouri until relocating to the United Kingdom 17 years ago. He is CEO of Genistar, a financial education company focused on helping families become financially free. He also serves on the board of directors for Hillsong church in London.

This summer, Lestz is planning to release “Against All Odds: The Remarkable True Story of a Street Kid Who Became a Millionaire.” It’s a memoir about his life in the foster system, transformational years in Elkville, and journey to financial faithfulness. In the book, he describes that first visit to church. The congregation sang “Coming Home,” Lestz wrote, while the pastor asked if anyone there wanted to start a new life, in Christ.  Jeff raised his hand.

“There I stood with my hand raised in that little church, in a little village, in the middle of nowhere, surrounded by strangers and a bunch of happy, former drug-dealing hippies,” he wrote. “I can only describe it as a miracle.” 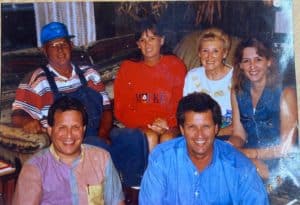 This 1998 photo shows Bill and Barbara Watson at their Elkville home with two of their daughters, Katie and Cheryl, Jeff Lestz (bottom left) and Michael Toppel, one of the original residents of the Cosmic Cowboys commune.

After their years with the hippies, the Watsons continued to find ways to help people. They    became foster parents. Barbara worked in a nursing home, and found other ways to serve people in need. In her 70s, she went on her first international mission trip to Africa. Followed soon afterward by her second trip to Africa, this time with her daughter Cheryl. Scott Slone, pastor of FBC Elkville, remembers Barbara signing up to participate in a 24-hour prayer campaign at the church. She picked the midnight time slot because she had trouble sleeping, he said. She prayed at the church until 4 a.m.

“It almost brings me to tears when I talk about it even now,” the pastor said. Barbara had started saving for her third mission trip, but was unable to go because of her health. She donated the money to FBC Elkville’s mission trip fund, where it has helped others go on mission trips. “Her story lives on,” Slone said.

When asked what set their mom apart, her daughters point to a consistent desire to care for people, instilled early on, and a solid faith. “I just think her strength in God was the one thing that got her through it all,” Debbie said. Cheryl echoed her sister.

“It was her relationship with Jesus.”

Photo at top: Barbara Watson, pictured above (back row, second from left), felt called to share the gospel with hippies in Elkville, just before Jeff Lestz arrived as a long-haired 14-year-old in 1971.