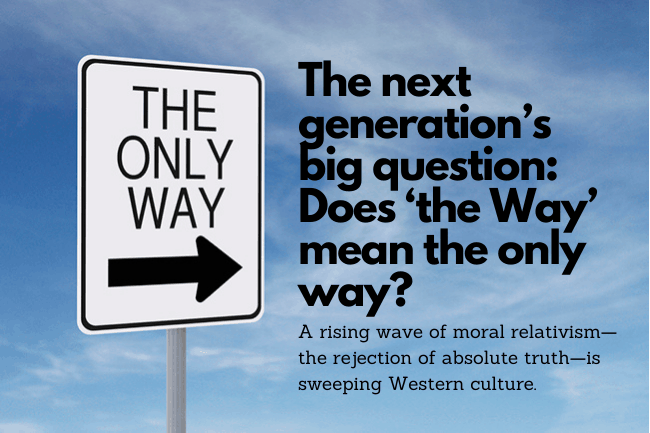 Perhaps we shouldn’t be surprised, but it hurts to read the numbers. A faith foundation built on the exclusivity of Christ in salvation is shifting under the feet of teens and young adults. A new poll by the Barna Group shows a growing number of young people say there’s more than one way to get to heaven.

That bit where Jesus says, “I am THE way” apparently applies no longer, according to 65% of Generation Z respondents polled in 2020. That number is up from 58% just two years ago. The increase is part of a rising wave of moral relativism—the rejection of absolute truth—in Western culture, and especially among younger adults. 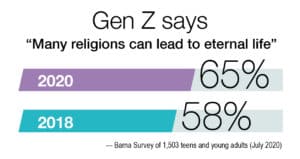 In its first survey of Gen Z in 2018, the evangelical polling organization found only 4% had what Barna defined as a biblical worldview. In the follow-up report just released, the numbers subscribing to moral relativism rose to three-fourths among teens and young adults: 31% “strongly agree” that what is “morally right and wrong changes over time, based on society” (up from 25% in 2018). And another 43% agree “somewhat.”

The impact on the preacher’s topical triumvirate—sex, drugs, and rock-and-roll—is obvious, as harmful behaviors are legalized and gender fluidity is normalized. But it’s the effluence on the rock-solid base of our faith that is most troubling.

(I respect the word effluence, not to be confused with affluence, but more like influence. Nasty influence. I learned about effluence while living near dairy farms. The natural by-products of cows that are normally good for gardeners overwhelmed the regional watershed and fed the growth of choking algae. This effluence became poison.)

So, what is our response to a culture and a generation that deny the exclusivity of Christ in salvation? Apologists in previous generations might have focused on the lack of logic in the “many roads” view, but a culture that refutes the existence of single, unerring truth will likely reject logic as well. Logic would naturally lead to a conclusion, and the “one way” rationale, however you get there, is what’s offensive these days. The best we can hope for is to engage in conversation that doesn’t shut the door to long-term relationships. This conversation may take a while.

People steeped in tolerance for the validity of every opinion since they entered kindergarten may not be prepared to evaluate those opinions and determine that some are right and some are wrong. For them, to reject a viewpoint is to reject the person. We live in the age of the preface “for me.” Contemporary speakers say that as if to inoculate themselves from objection or offense, as if by saying “for me” or “in my opinion” the statements that follow apply to no one else, and therefore cannot be incorrect. Or offensive.

Truth is not squishy. Truth is not private. Truth is not individualistic. Truth applies to us all. This does not endanger the uniqueness of each of us as individuals, but instead affirms our common humanity and our shared need. Our sin offends God; we all need forgiveness in order to have an eternal relationship with God.

Henry Blackaby said it best, “Truth is a person.” We might argue facts, or in the current age whether facts are even facts at all, but we can’t argue with the existence of a person. I agree with Blackaby that Truth is a person. His name is Jesus.

Jesus said, “I am the way, the truth, and the life.” These are exclusive statements.

As an article, “the” distinguishes what follows from all other things of the same category. It works that way in English and in the original language of the New Testament, Greek, and in languages of all kinds. We should not apologize for the vital distinction between “the” and “a.” If Jesus had said “a way, a truth, a life,” there would be room for many others. But he did not. If we needed further explanation, he followed up with, “No one comes to the Father except through me,” (John 14:6).

There are multiple “the” statements about the Messiah in Scripture. They all point to his uniqueness in the universe. What might have been assumed in previous generations must be said repeatedly for upcoming generations:

Our children need to hear this, a lot. If they don’t, the culture will so devalue exclusivity in their understanding that it erodes the foundation of their faith before their parents even realize it’s happened.

It’s time to preach the power of “the.” The next generation depends on it.