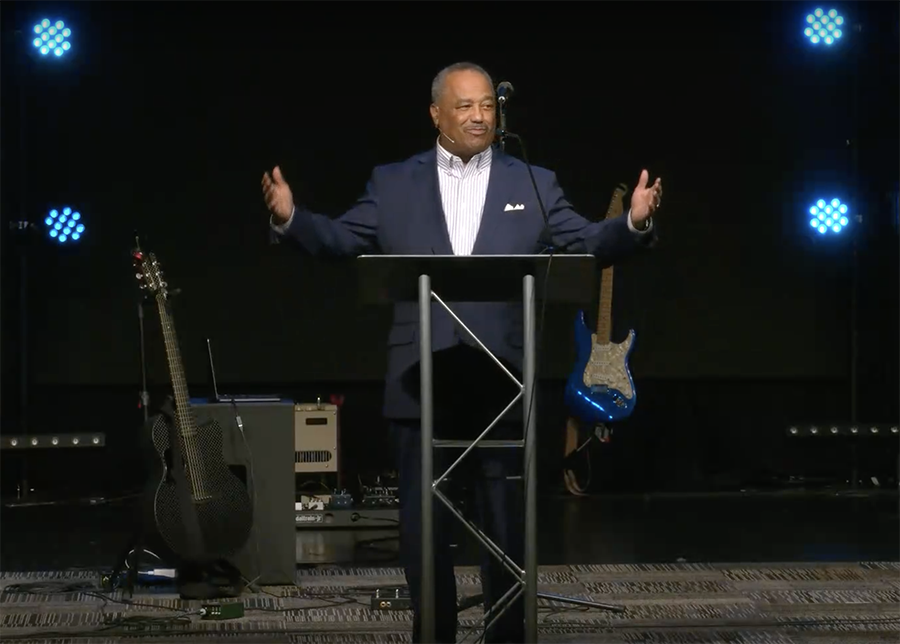 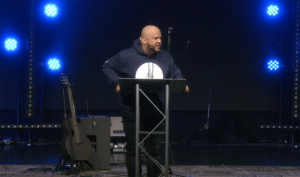 The house was rocking as the worship team from The Journey Church/Hanley Road in St. Louis rattled the rafters with a mix of contemporary worship songs and invigorating old school hymns. Pastors and spouses filled the auditorium at Metro Community Church in Edwardsville for the second session of the 2022 IBSA Pastors Conference.

The preachers in the evening session delivered a rousing tandem of sermons on overcoming challenges in ministry to find “Unspeakable Joy.” Both Cam Triggs of Orlando and Fred Luter of New Orleans preached from Psalms, 63 and 34 respectively, on David’s discoveries in challenging times.

Triggs’s message on “The Good Life” produced several memorable quotes. “We don’t follow Jesus for a better life,” Triggs said, “but because he is better than life.”

As did the speakers before him, Triggs spoke of the lessons learned through ministry during the limitations of Covid, many of them about the pastor himself. “The pandemic has showed us that this world has nothing to offer us,” Triggs said. “What do you do when everybody has a small church, everybody has the same shrinking numbers, when God closes the doors on all our churches?”

The Florida pastor cited the example of David under persecution by his own son Absolom. “Waves of suffering will come in ministry. One thing God wants to do in the wilderness is that the waves will not push you away from God, but into God.”

Friends will abandon you, Triggs said, “but if you put your faith in God, he will not break and he will not buckle.”

And in Jesus Christ, there is no church failure, he assured the pastors. He prayed they “would feel the tangible presence of the Holy Spirit telling you, ‘This is not your battle. Let me handle it.’”

Using a rhetorical device common to his preaching tradition, Triggs rallied the pastors who traveled from across Illinois. “God does not merely want to do something through you. He wants to do something in you.”

Former SBC President Fred Luter picked the baton, drawing from Psalm 34:19: “Many are the afflictions of the righteous.” Luter pointed out the plight of the afflicted, “many.” After listing many blessings of ministry, Luter described  “the other side of ministry”: temptations, struggles, fears, and people problems.

The problem for the afflicted is in the juxtaposition of the words afflictions and righteous. “I could have handled the text better if it had said many are the afflictions of the sinner, the criminal, the whoremonger,” Luter said. “Then I could have come to the conclusion that what goes around comes around, but the Bible doesn’t say that.”

After comparing David and Job, he turned to the promises to the afflicted, built on the word “but.” But the Lord delivers them out of the afflictions.