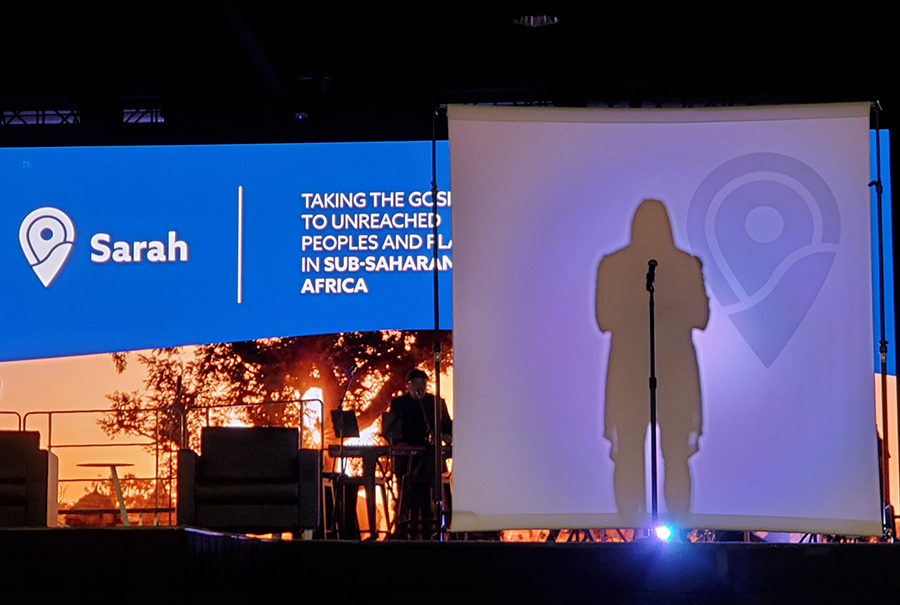 IMB missionaries who will serve in high security level ares were seen in silhouette only.

This morning the real meeting began, and the convention hall looked like it. The place was packed, with over 7,500 registered messengers in attendance. It was a morning marked by floor debate, the SBC President’s sermon, and a glorious missionary commissioning service.

The spiritual highlight of the morning was the IMB Sending Celebration where 52 new missionaries crossed the platform, with most standing behind a white screen to hide their identities because they are headed to dangerous locations. IMB President Paul Chitwood received thunderous applause when he passionately reminded messengers, “This is why we need to stay together. This is why we exist!”

As is the annual tradition, the lines formed quickly at the microphone stations, awaiting an opportunity to make motions, and there were plenty. Messengers made motions, made amendments to committee reports, spoke in favor and against amendments and resolutions, and exercised their rights as part of the largest deliberative body in the world.

To the uninitiated, this part can be a bit shocking and disorienting. Some step to the mic with well thought out, valid points of consideration. Others come bringing pet projects, motions, or amendments that have no chance to win the majority approval from their fellow messengers. The floor debates quickly pushed the schedule, falling further and further behind. While it can feel a bit contentious at times, it is orderly. Presidential candidate Tom Ascol and seminary president Al Mohler both waited their turn in line, hoping to speak from the floor. This is what makes the Southern Baptist Convention meeting unique.

Outgoing SBC President Ed Litton gave his one and only President’s Address. Speaking from Matthew, the tone in his call to the SBC was one of repentance and humility. With an emphasis on our collective need for the compassion and vision of Jesus for the suffering, Litton called the crowd to follow Jesus into engaging a sinful and lost world, rather than flee from them. “Isolation from the sinfulness and suffering of the world doesn’t build compassion. It builds judgment.” He went on, “Will we repent of the idolatry of power and let the gut-punch of this moment we are in change us?”

This recognition of this humbling moment the SBC is in and the understanding that repentance and return to God as the only way forward could be heard from the main platform, in large group meetings, and in small group gatherings. It remains to be seen if that repentance will characterize the actions of messengers on the floor.