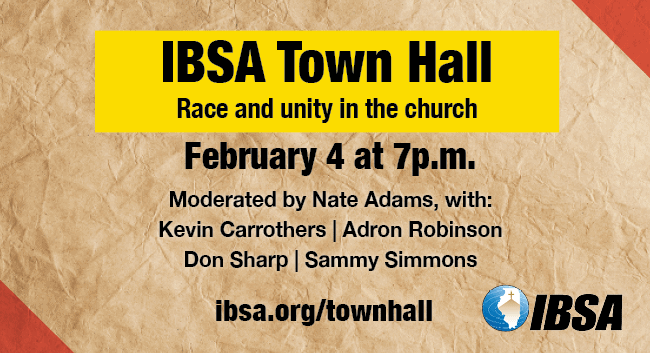 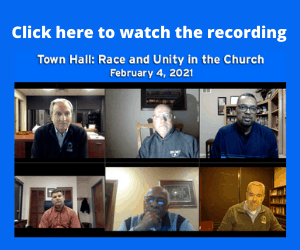 Three past presidents of the Illinois Baptist State Association joined current president Sammy Simmons and IBSA Executive Director Nate Adams for a virtual town hall meeting Feb. 4 on how pastors can encourage unity in their congregations and contexts in times of racial tension.

Kevin Carrothers, Adron Robinson, Don Sharp, and Simmons fielded questions from Adams and also answered some queries submitted by online viewers. The meeting was meant to be an opportunity for open dialogue, Adams said in the introduction—one that could lead to practical steps forward.

Adams began by asking each leader to describe their congregation’s reaction to the 2020 deaths of African Americans including Ahmaud Arbery, Breonna Taylor, and George Floyd, and the unrest that followed in many places across the country.

“The first word you think of is anger,” said Sharp, pastor of Faith Tabernacle Baptist Church in Chicago. “Anger, frustration, and when is it ever going to end.” Sharp recalled growing up in Chicago and going to see the body of Emmett Till, the African American teenager killed by a white mob in 1955. “What it does for our congregation,” Sharp said of the recent killings, “it just reinforces…past pain, past histories.”

Adams asked if a perceived lack of advocacy or empathy from white church leaders contributes to the anger felt by African American leaders.

“Oftentimes the black church doesn’t feel like the rest of the church community in America…shares our burden or [has] compassion for the murder of our brothers and sisters,” said Robinson, pastor of Hillcrest Baptist Church in Country Club Hills. He said the “one another” passages in the New Testament are helpful here, with their admonitions to have compassion for one another and bear one another’s burdens.

Carrothers agreed when one member of the family grieves, we all should grieve, but also acknowledged feeling helpless to know what to do. “I don’t know how to influence change. I don’t have that role to change the system, so to speak, and the organizations, those structures. And that can be a frustration in how to do that.”

One answer, the panelists said, is to intentionally build relationships across racial differences. Carrothers is former pastor of Rochester First Baptist Church and now serves as director of missions for Salem South Baptist Association in Mt. Vernon. He talked about working alongside Robinson when they served as president and vice president of IBSA. Simmons, current IBSA president, has hosted Robinson at his southern Illinois church, Immanuel Baptist in Benton.

“If more believers were intentional about having relationships with their brothers and sisters in Christ of other ethnicities,” Robinson said, “we would see one another as created in the image of God, and put down a lot of the other stuff that we hear from the world that creeps into the church walls.”

“Start with one person,” Carrothers advised. “Reach out across the church aisle, and embrace a brother or sister from another ethnic background. Begin to build that relationship, one by one.”

The panelists also urged pastors to preach the truth in regards to racism. “I think we need to be courageous in calling racism what it is: sin,” Simmons said. Robinson encouraged pastors to do the work of “discipling out” racism by teaching what the Bible says about all humans being created in the image of God.

“Racial reconciliation has to be intentional,” Sharp said.

Lasting change
In January, a group of national Southern Baptist leaders met to discuss racial tensions in the denomination stemming from a debate over Critical Race Theory. The framework was the subject of a controversial resolution adopted by messengers to the 2019 Southern Baptist Convention, and is expected to emerge again at the June 2021 meeting in Nashville.

Over the years, Southern Baptists have made several resolutions condemning racism, lamenting the role of slavery in the denomination’s history, and urging Baptists to seek and work toward racial reconciliation. During the IBSA Town Hall, an online viewer asked panelists how the denomination can move from making statements about racism, to seeing lasting change.

“Instead of statements, I just think we need substance. We need to work together.” Simmons said. He quoted Illinois Baptist church planter and pastor Belafae Johnson, who said, “Not only do we need minorities at the table, we need minorities helping us make the table.”

Robinson said the SBC has made great statements and has great theology, and need to work more on “do-ology.”

“The more we live out the Great Commandment,” he said, referencing the biblical mandate to love God with heart, soul, and mind, “the more we’ll be confirmed to the image of Christ, the more we will break down the man-made barriers and the demonic barriers that are between us.”

The Town Hall Meeting is available for viewing here.