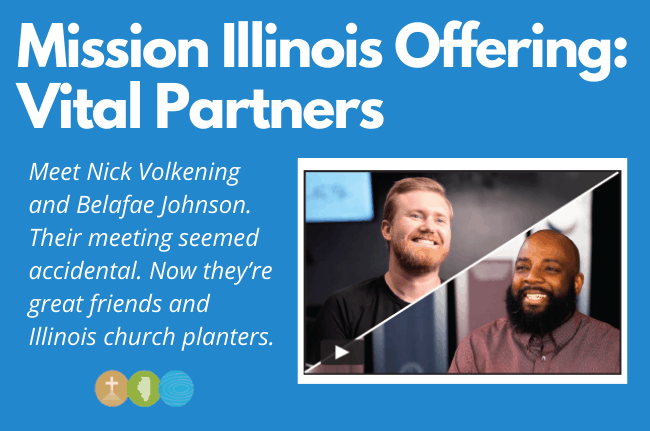 It was almost an accident when Nick Volkening met Belafae Johnson.

“I just moved onto campus at SIU-E, and was looking for a job,” Volkening said. “I walked into the wrong door of the building.”

“He comes in and says, ‘Hey I’m lost,’” Johnson remembers of their first encounter. Johnson was managing the Transportation Department at Southern Illinois University in Edwardsville. Volkening was a student looking for part-time work. Johnson directed him to the right department. Impressed even in their brief meeting, Johnson later asked a fellow manager what became of the student.

“His schedule didn’t work with the job I had available,” the colleague responded, “but I wish I could have hired him. I like that kid.”

So did Johnson, so he hired Nick Volkening to work on his team. Soon they would be on another team together.

Volkening was serving on a church planting team with Rayden Hollis at Red Hill Church, a new congregation reaching out to students. Johnson was interested in the subject, and soon the conversation turned from servicing cars to starting churches.

“Nick gave me the book, ‘Church Planter.’ It was the first book that I read that began to propel me towards church planting,” Johnson said. “It was just amazing to me to know that there were people who just dreamed about churches being planted, to know that there was access to relationships and to resources that would help us to live out what the Lord called us to do,” Johnson said.

“I’m observing this in him, I’m seeing this calling forming, and I go, ‘Man, I think this guy might be a church planter,’” Volkening said. “For whatever reason, God used that…for the vision that would become Purposed church.”

The vision was for a multiethnic congregation to share the gospel in Mascoutah, a town of over

8,000 near Scott Air Force Base. Johnson would eventually leave his university position as he and his family invested full-time in the new church plant. Volkening would introduce his friend and former boss to a community of church planters in the Send St. Louis network, that includes partnership with IBSA represented by Church Planting Director Eddie Pullen.

“The primary reason Belafae wanted to plant a church was to reach all different people in Mascoutah with the gospel,” Pullen said. “He is one of the most gospel-centric church planters I’ve ever dealt with.”

Today, Volkening is planting New City Church in Champaign near the University of Illinois. He keeps in touch with Johnson. “The special thing that’s happening here is relationship. It’s part of what keeps young and vulnerable churches in the ground.”

Watch them share their story in the Mission Illinois Offering video “Vital Partners.”