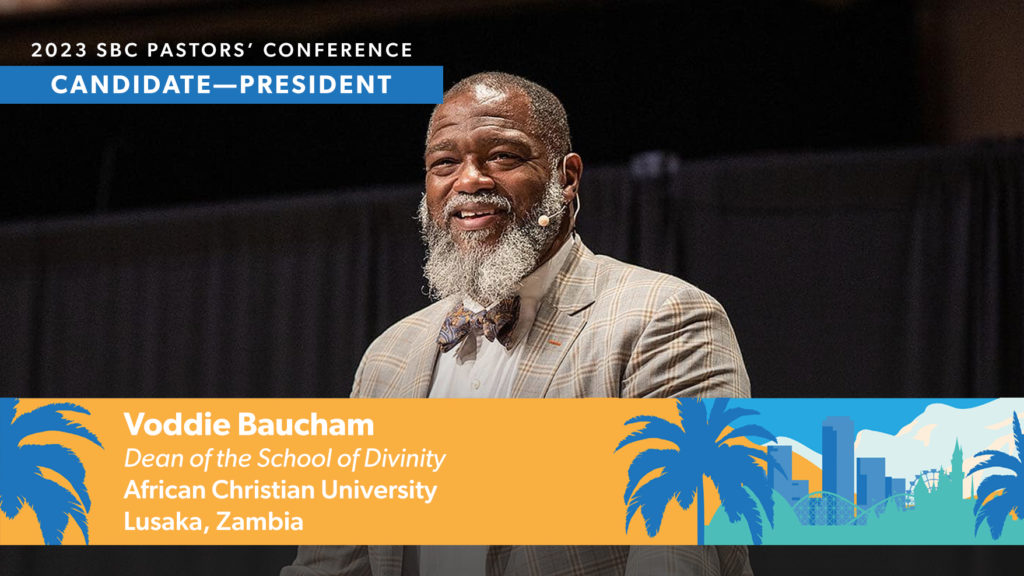 Voddie Baucham, dean of theology at African Christian University in Lusaka, Zambia, will be nominated for Southern Baptist Convention Pastors’ Conference president at the 2022 SBC Annual Meeting in Anaheim, according to a story published at the Daily Wire, a conservative news site conceived and founded by political commentators Ben Shapiro and Jeremy Boreing. The nomination was also announced in a statement posted at the Founders Ministries website.

“Voddie Baucham is one of the most faithful expositors of our day, a day in which sound preaching is more important than ever,” the Founders Ministries statement said. “He will give the exact kind of leadership needed for the SBC Pastors’ Conference, an event which in recent years has shifted radically from one of the high points of the entire year into what many have termed ‘Woke Fest.’ The importance of restoring that pivotal event cannot be overstated.”

The statement supporting Baucham’s nomination is signed by 11 people. Among those is Mike Stone, a member of the SBC Executive Committee and the steering committee of the Conservative Baptist Network (CBN), who lost the SBC presidency in 2021 in a runoff with Ed Litton. Stone is senior pastor of Emmanuel Baptist in Blackshear, Ga. Several other CBN members are signatories as well, including current SBC First Vice President Lee Brand.

Baucham left his position as founding pastor of Grace Family Baptist Church in Spring, Texas, in 2015 and is no longer an active member there, current pastors Erin Frye and Aaron Wright told Baptist Press.

“We only have active members at Grace Family Baptist Church. This is, by the way, what Voddie always taught while he was preaching in the church. He stands by that now as well. There is no such thing as an inactive member,” Frye and Wright said in a jointly signed email. “Therefore, when we sent him out to Zambia, he joined the solid biblical church he was attending. He is a member of Kabwata Baptist Church in Zambia and has been since 2015.

“He continues to be a part of our church since we are the Southern Baptist Church that sent him out. We support him monthly, and he regularly comes back and preaches at our church and other conferences.”

Grace Family contributed $500 through the Cooperative Program in 2021, which was the church’s first CP gift since 2014, a Southern Baptists of Texas spokesperson told Baptist Press.

Neither the university where Baucham now serves nor the church where he is a member is Southern Baptist. They are both affiliated with Reformed Baptists of Zambia.

It is unclear whether Baucham’s lack of membership in a Southern Baptist congregation precludes his nomination. The conference has no organizing documents or stated qualifications for its officers. Baucham serves on the board of Founders Ministries and is a member of the CBN steering council, two groups with Southern Baptist members.

President of Voddie Baucham Ministries, Baucham lists an active speakers’ itinerary at voddiebaucham.org, including a 2022 spring tour that included engagements at the G3 Expositors Conference in Santa Clarita, the Shepherds’ Conference in Sun Valley, the 58th Annual Louisiana Governor’s Prayer Breakfast in Baton Rouge, La., and the Triple R Fundraising Dinner in Crestview, Fla., among other stops.

Baucham did not respond to requests for comments Baptist Press sent to two different email addresses at time of publication .

He describes himself as a cultural apologist. According to voddiebaucham.org, “Whether teaching on classical apologetic issues like the validity and historicity of the Bible, or the resurrection of Christ; or teaching on biblical manhood/womanhood, marriage and family, he helps ordinary people understand the significance of thinking and living biblically in every area of life.”

He planted Grace Family Baptist Church in 2006, and maintains a relationship with the church as a missionary, Frye and Wright said.

“We sent him out as a missionary to work at the African Christian University in Zambia in 2015. We believe that missionaries going out into the field should join the church that they are attending residentially on the field,” Frye and Wright said. “We believe this because biblically, that is how someone is shepherded.” The church only allows exceptions when missionaries in serving in areas with no churches, the pastors said.

The statement from the group did not indicate who will nominate Baucham for the post, but it also announced the intended nomination of Florida pastor Tom Ascol, Founders Ministries president, for SBC president.