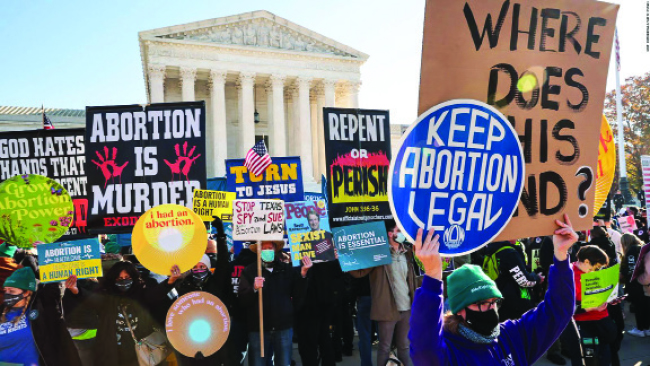 “We cannot change what we’re not willing to confront. We have to do everything in love and have a gentle spirit.” That’s the only way Christians can end abortion according to Angela Michael, Executive Director of Small Victories Pregnancy Outreach. But Michael, like many pro-life advocates, is waiting for a ruling from the U.S. Supreme Court that could overturn the key court case that legalized abortion almost 40 years ago.

The outcome of that case, and a couple of others, may also determine whether Illinois remains an abortion destination for women from other states that have effectively limited the procedure with what is sometimes called “heartbeat legislation,” like the Mississippi law under scrutiny.

Michael, who is also a retired obstetrical nurse and certified sonographer, is on the frontlines daily outside of Hope Abortion Clinic in Granite City and Planned Parenthood in Fairview Heights. The clinics are located across the river from St. Louis where some of the women she meets come from, along with other parts of Missouri, the Midwest, South, and states beyond. She’s been doing sidewalk counseling and providing ultrasounds for women considering abortion using a portable unit inside a small RV for almost 29 years.

The need for her life-saving work isn’t over, yet.

How we got here
In 1973 the United States Supreme Court issued a ruling in Roe v. Wade which made abortion legal in all 50 states and divided the nation into two camps—pro-life and pro-abortion. Since then, states with widely differing opinions have taken matters into their own hands, writing laws leading to cases brought from Texas and Mississippi that are now before the Court.

While Roe limited abortions to the first three months of pregnancy, the Court’s decision in 1992’s Casey v. Planned Parenthood linked the legality of abortion to the viability of the unborn child. The Court went further than Roe when it declared abortion to be a constitutional right under the 14th Amendment, limiting abortions only to the period when an unborn child’s life would not be viable outside the womb.

In the years since Casey, some states such as Illinois and New York have changed their laws to allow abortions up to the ninth month of pregnancy, while others have tried to eliminate abortion. Four states have just one abortion clinic each: North Dakota, South Dakota, Mississippi, and Missouri.

In December the U.S. Supreme Court heard oral arguments against a Mississippi state law which limits abortions after the fifteenth week of pregnancy. Dobbs v. Jackson Women’s Health put the question before the Court of whether all pre-viability bans on elective abortions are unconstitutional and has the potential to overturn Roe v. Wade.

A live audio stream of the arguments was made available to the public. Many who heard it believe a majority of the judges are in favor of overturning Roe. And with the current conservative leaning of the bench, it seems more possible that ever.

But Michael, isn’t that certain. “It would be nice to see Roe go away, but I don’t see it,” she said. “We need to dig our heels in and fight even harder for these women and their babies.”

Michael believes it’s important that Christians “reach out to the women and love them too. It’s a little work, but we’re all supposed to be our brother’s keeper. If we just read the Bible, it’s all there.”

The new Texas abortion law, heard by the Court this past November, limits abortions up to the seventh week of pregnancy. The Court allowed the law to remain in place, but did allow a narrow window for challenges, until it announces a decision in the case the spring.

The state of it all in Illinois
Over the last few years, lawmakers in Illinois have gutted any remaining pro-life laws in the state. The Reproductive Health Act went into effect in 2019. It requires private health insurance to offer abortion coverage even for religious employers who do not want to include it in their insurance benefits. An employer cannot offer pregnancy related care without offering abortion coverage: it’s all or nothing.

In the fall 2021 veto session, Illinois House Bill 370 (HB 370), called the Youth Health and Safety Act, was passed. It repealed the Parental Notification Act (PNA) which required women under the age of 18 to notify a parent, legal guardian, or grandparent at least 48 hours prior to an abortion. It didn’t require permission or approval be obtained before the minor received the abortion. PNA was the last remaining pro-life law left in the state. According to the Guttmacher Institute, 37 other states still have some type of parental notice law in place.

Opponents of the bill said it would enable human traffickers and other sexual abusers by eliminating contact with parents or guardians. Amy Gehrke, spokesperson for Illinois Right to Life Action, expressed concern for the “rights of parents or the health and safety of minor girls” including those “at the mercy of human traffickers and sexual predators.”

“In Illinois, minor girls cannot get a body piercing, a tattoo, or even receive an aspirin without parental consent,” Gehrke said. “Enabling children to have abortions without their parents’ involvement is simply appalling.”

What churches can do
Should Roe be overturned, abortion proponents have begun trying to illicit fear in some women by claiming the indigent will go back to using coat hangers to induce abortions or seek “back alley” practitioners. But that isn’t realistic according to recent studies.

Legislatures in 22 states that already lean pro-life are expected to move to ban or substantially restrict access to abortion if Roe were overturned or weakened. However, it’s anticipated some women would be able to travel out of state for the procedure.

The New York Times reported a study by Middlebury College, the University of California in San Francisco, and the Guttmacher Institute found without Roe “the number of legal abortions in the country would fall by at least 14%.” Research also suggested, “Roughly half of women who are unable to access a legal abortion would probably instead bear children.” 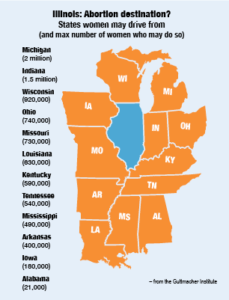 The remaining women would be expected to obtain the abortion pill or travel to obtain an abortion. That’s where Illinois comes into play in a big way.

The Guttmacher Institute predicts if the Court were to overturn Roe v Wade, in Illinois alone the increase in women ages 15-49 who may drive to the state to obtain an abortion could range from 100,000 to 8.9 million. They also predict an up to 8,651% increase in the number of women “who may drive to Illinois for abortion care.”

The numbers seem astronomical, but Illinois is one of the few states to “enshrine” abortion into law under the Roe v. Wade ruling even if the landmark case is limited or overturned. The state legislature in Vermont is preparing to do the same there, keeping abortion legal even if the high court eliminates the laws making it possible. If they can get away with it.

Another noteworthy action in late 2021: the Food and Drug Administration said it will eliminate the in-person medical visit required for dispensing pills that induce abortion. The requirement, lifted temporarily during the Covid pandemic, will be struck permanently. Two drugs that cause abortion may be dispensed online for women up to 10 weeks pregnant.

And, ironically, the Texas attorney who successfully argued the Roe v. Wade case before the U.S. Supreme Court in 1973, Sarah Weddington, died at the end of December, even as the Court considered limiting abortion in Texas to six weeks after conception.

Micheal suggests starting with the basics: “Ask for prayer. When you’ve got a group, God hears.”

She also recommends starting a sanctity of life group. “Don’t keep it in the building,” she said. “They need to be visible. Include women who regret their decision to have an abortion. Young ladies need to see them.”

Michael also said it’s important to “have on the spot answers for women. The abortion industry tells them Christians only care about their babies, that’s not true.” This would include information about where to find food, clothing, and shelter, along with where to receive mental health care and a myriad of other needs.

She also urged churches to support their local crisis pregnancy centers. “They need your encouragement.”