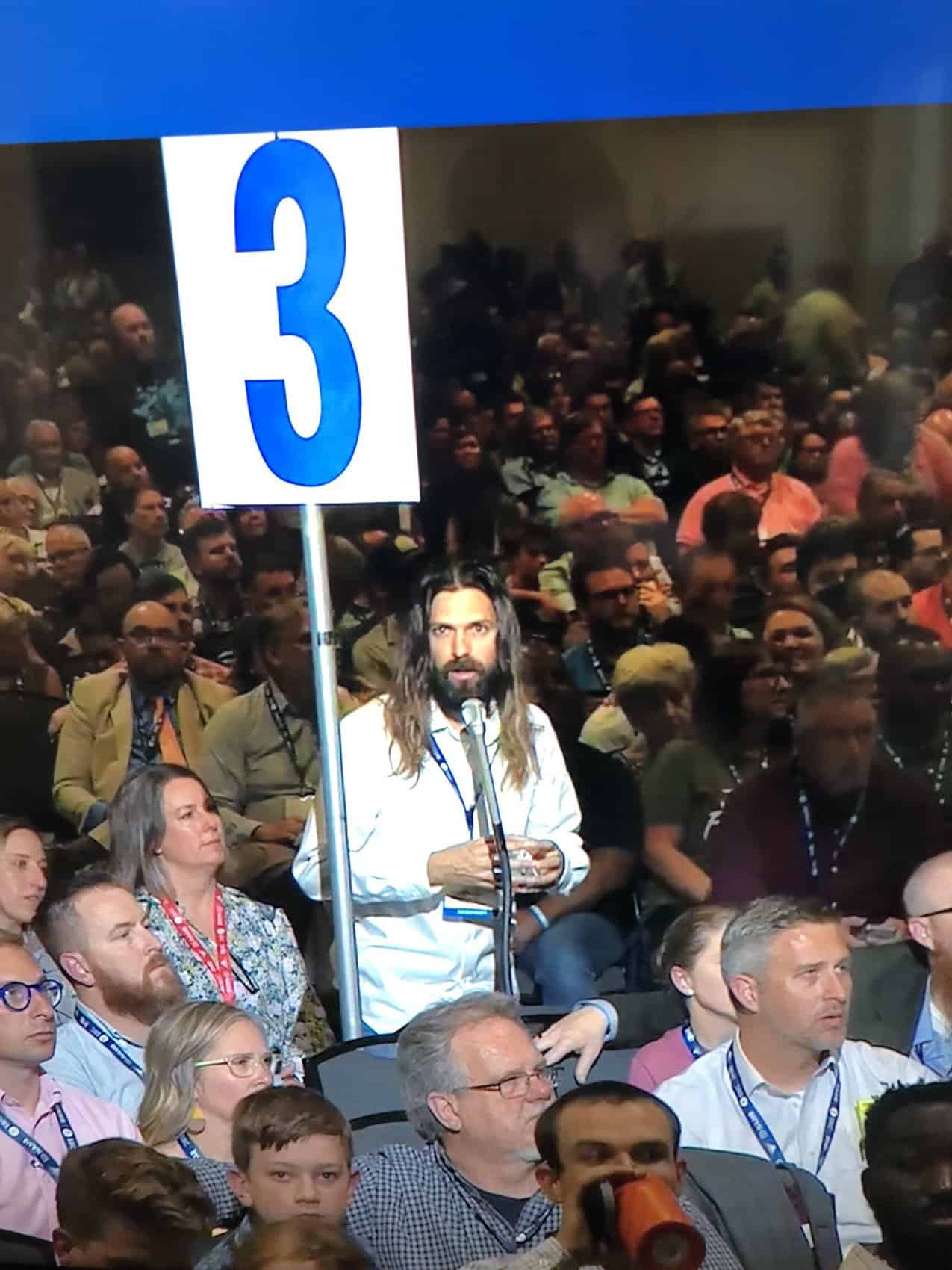 The appearance of Joshua Coleman, pastor of Azalea Baptist Church in St. Petersburg, FL, drew comparisons to Jesus by some online viewers of SBC 21 in Nashville. Image from Twitter.

There was a moment in the Southern Baptist Convention in Nashville that caught the attention of messengers in the hall and watchers online, not because of its verbal content, but for its optics, as they say. The presiding officer recognized microphone number three. A voice began his introduction, a pastor from Florida. When his image popped up on screen, there was a bit of a gasp.

Jesus just showed up at the SBC, the Twitterverse exclaimed. And it sure looked that way.

Joshua Coleman, with long hair and a beard, was dressed in a long white shirt, almost tunic-like, said he was new to the SBC. He had a simple question involving discipling resources for the local church. But his appearance on the convention floor amid so many messengers making motions and resolutions in record numbers raised another pertinent question:

If he showed up at the convention in bodily form, what would Jesus resolve?

The value of resolutions has been argued in the weeks since the convention, both to make the case for their importance and to refute it. After all, resolutions can only be made by messengers at a particular point in time, and technically they only serve to express the opinion of that particular convention. Resolutions are not binding on the local church or on SBC entities. And, as we learned, they cannot be rescinded. One messenger sought to rescind resolutions back to the convention’s founding to make a point, but the action was ruled out of order. Messengers at any given convention may only vote to express a different opinion on a matter later on.

That does not lessen the value of resolutions. And resolutions should not be dismissed because of their punctiliar (point-in-time) nature.

Two resolutions passed in Nashville demonstrate this. Messengers approved a resolution supporting a complete abolition position on abortion, which was in conflict with one brought by the Committee on Resolutions. The Committee’s position has been further unpacked following the convention. Their original statement would allow for incremental limitation on abortions as an effective means of virtually ending abortion. The alternate resolution received a lot of attention, and ultimately approval of an absolutist stance.

Messengers also approved Resolution 8, which made the SBC the first denomination to identify the killing of Uyghur Muslims in China as ethnic genocide. Christianity Today reported surprise in some quadrants, but also appreciation.

“The [SBC] has blazed a trail for others to follow,” said Nury Turkel, chair of the Uyghur Human Rights Project and vice chair of the U.S. Commission on International Religious Freedom (USCIRF). “This is a historic resolution where Baptists have come out to affirm solidarity in standing up against atrocities, no matter the ethnic and religious identity of the victims.”

That’s the power of resolutions. They may not be binding or especially lasting, but resolutions can crystallize opinion. Because of that power, a resolution should be considered not because of the popularity of the position or the strength of the voices advocating it, but because of the strength of the argument. Sometimes that argument is complicated and nuanced; understanding and approving it takes time. The investment of time is worthwhile if, in our congregational form of government, we are to make statements that affect public opinion and effect public policy.

The wife of a pastor-friend of mine would tell her husband, if she needed to say home while he went to the convention, “Bring me a copy of the resolutions.” Today, of course, she can download them, but her point is well taken. Resolutions have impact. They turn the spotlight. They shift opinions. They state what Baptists believe needs attention.

And, hopefully, Jesus would too.