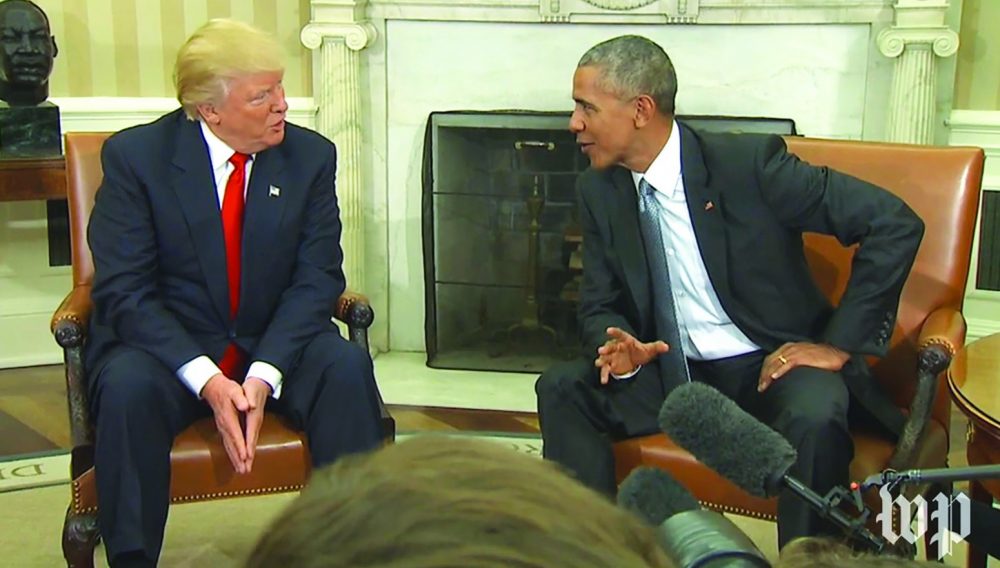 PEACE TALK – President-elect Trump and President Obama, who had harsh words for one another during the campaign, met for some 90 minutes at the White House Nov. 10. Wahington Post screen grab

Less than a month after an historic presidential election, Americans on both sides of the aisle are still surprised by the outcome and a long, hostile campaign beforehand. That President-elect Donald Trump’s victory was at least partially fueled by support from white evangelical voters has caused more confusion for the church during what was already a highly contentious time for the country.

In the days following Trump’s victory, Christian leaders encouraged believers to pray for the nation’s new leader, and also counseled them on how to navigate a deeply divided country and culture.

Southern Baptist Convention President Steve Gaines put prayer atop a list of 10 things Christians can do after the election.

“There is nothing wrong and everything right for Christians who live in the United States of America to pray for God to bless our country,” Gaines said at the annual meeting of the Tennessee Baptist Convention Nov. 13. The pastor of Bellevue Baptist Church in Memphis, Tenn., urged Christians to pray for the president, president-elect and others in leadership—whether or not one agrees with their views.

Gaines also urged Christians to prioritize family, work hard, and take care of their finances. Be involved in the local church, he said, minister to “the least of these,” share Christ, make disciples, and live a holy life. Also on Gaines’ list: Love your fellow man.

The deeply differing opinions that marked the campaign were on display among Christian leaders following the election.

Southern Baptist pastors and fellow Texans Jack Graham and Robert Jeffress both expressed their pleasure at the outcome. Referring to Hillary Clinton’s pro-choice positions, Graham said, “We are very pleased and ecstatic that we have an opportunity to speak for the unborn.” The pastor of Prestonwood Baptist Church in Plano told The Dallas Morning News, “We’re going to celebrate that as a victory.”

In an interview on Fox Business, Jeffress, a vocal Trump supporter who joined Graham on the candidate’s evangelical advisory team, called Trump a “change candidate” who galvanized the support of evangelicals who “were tired of eight years of the Obama liberal administration that was a war on religion.”

Thabiti Anyabwile, though, in a blog post for The Gospel Coalition, discussed problems associated with Trump’s support from white evangelicals. Anyabwile, pastor of Anacostia River Church in Washington, D.C., said the evangelical movement’s turnout for Trump “has made its evangelistic mission more difficult with many it wants to reach….

“The vote for Trump creates or amplifies a credibility problem for evangelicals. Why should the unrepentant listen to their gospel when it seems so evident they’ve not applied that gospel to their political choices?….For many, Christ and the gospel are now bound up—rightly or wrongly—with evangelicals choosing a man with little resemblance to either.”

Immediately following the election, some Christian leaders sought to bridge the divide among evangelicals in the pews. J.D. Greear, pastor of The Summit Church in Raleigh-Durham, blogged about two key words for Christians: empathy and charity. Toward one another.

“When a sibling in Christ votes a different way than you, choose to believe the better narrative about why they might have done so,” Greear wrote. “Be humble and charitable enough to realize that many mature Christians came to different conclusions about what the right posture was, and give them the benefit of the doubt where you can.

“You don’t have to agree with their conclusions, but in the church we can and must demonstrate a humility, forbearance, and civility usually absent from public discourse.”

– From Baptist Press and the Illinois Baptist