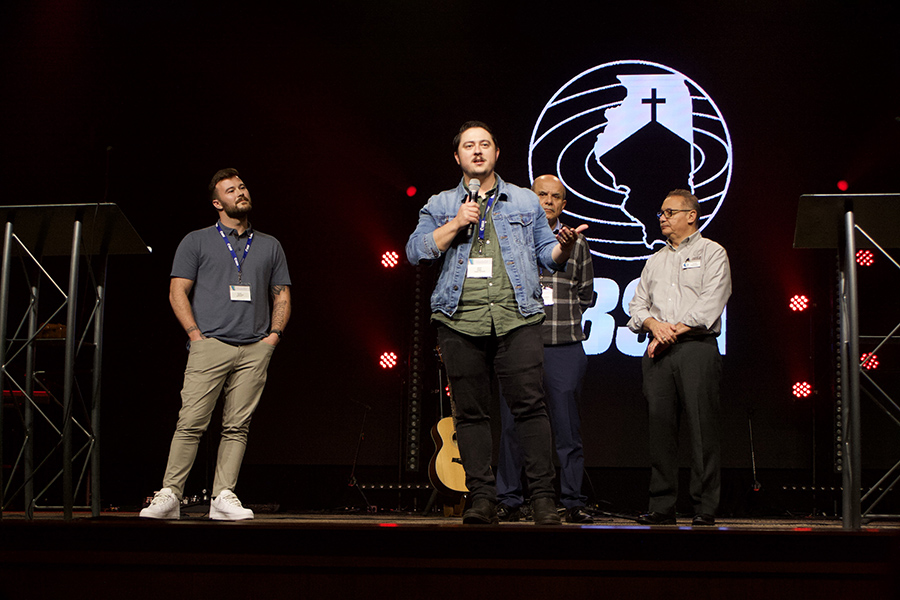 Jacob Goble (front center), planting pastor of Rooted Community Church, Lebanon, describes a town divided by state highway 4, with “have’s” on one side and “have not’s” on the other. Behind him are (left to right) Daniel Nemmers, planter pastor, Salt Church, ISU campus in Normal, Jose Nunez, pastor, Iglesia Buen Samaritano, Aurora, and IBSA’s Jorge Melendez. 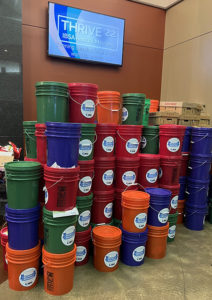 Pictured are just some of the 126 buckets, 25 medium size moving boxes, and multiple other assorted boxes and bags filled by Illinois Baptists for the Buckets of Blessings Missions Project.

Messengers gathered in the Metro East welcomed 13 new churches to the Illinois Baptist State Association (IBSA), heard about additional plans to prevent sexual abuse and the hidden movement of offenders, and on the subject of Covid, were told by the outgoing president to let it go and “start fresh.” Then the spotlight turned to missions with the theme “Each church a missionary.” While missions leaders shared testimonies in the auditorium, church volunteers filled “Buckets of Blessings” with goods for children’s ministries.

These actions marked the 116th IBSA Annual Meeting at Metro Community Church in Edwardsville Nov. 1-3. Along with receiving missions reports from IBSA and its affiliated financial development and children’s home ministries, and national missions partners, messengers approved a 2023 Cooperative Program budget of $6 million, maintaining a 56.5/43.5% split in mission funds between IBSA and the national SBC.

Presiding over his third and final meeting as IBSA President, his term extended due to the departure of previous president Sammy Simmons, Heath Tibbetts, pastor of First Baptist Church of Machesney Park, told 392 messengers and guests that the next president would bring together an ad hoc group of committees already in existence to put extra teeth into enforcement of sexual abuse prevention guidelines.

“I felt what was important, instead of adding to our constitution, we could make use of the documents we already have,” Tibbetts said. IBSA staff produced additional plans for abuse prevention after the national SBC Sexual Abuse Task Force issued recommendations in May. IBSA’s plan expands previous guidelines with five new recommendations.

In addition, the actions will give extra force to the IBSA Credentials Committee. “It seemed best to clarify language to help the Credentials Committee to identify what is a ‘cooperating church,’” Tibbetts said. “This will identify the tools they will need to take action” if a church fails to act on credible claims of abuse.

“We were surprised and glad to find that there were already a number of trauma-informed counselors” as recommended by the SBC’s Sexual Abuse Task Force in June, IBSA Executive Director Nate Adams reported. “The most important thing is that we all be vigilant in our churches” with training and background checks. “Sadly, predators look to churches as vulnerable places where they might have contact with children and vulnerable adults.”

In his report on the overall work of the state association, Adams concluded that the rebound from the pandemic in many Illinois churches is ongoing and not fully complete. He explained the three-year refocus project of IBSA, which clarified the work of the association as a network of churches seeking to “deliver network value that inspires each church to thrive in health, growth, and mission.”

IBSA’s work has shifted from delivering programs to aiding churches in development of processes that strengthen their ministries for their settings.

“Is our cooperation as a network working?” Adams asked. “Well, it’s kind of like democracy. It’s messy and there are disagreements and it’s worth fighting for. In a similar way, autonomous congregations working together—that it hangs together is a miracle.”

Adams choked up as he said, “I believe God wants us to work together to reach the lost people around us.”

Tibbetts talked about ministry life after Covid-induced failures. “God is encouraging us to stop talking about 2020,” he said. “Stop apologizing for where your church is, for the people who remain…. They’re either back or they’re not, get over it.”

Instead, focus on a new season of intimacy with God. “Start fresh, my friend. Start fresh,” Tibbetts urged. “One way is to evaluate our ministries and our churches rightly. We need to stop using the metrics.”

Renewed intimacy with God means elevating time spent with God over reliance on personal ability. “You’ve got ability,” the pastor said. “Ability and humility can walk side by side. If God has given you gifts, lean into it. But also lean into a more intimate relationship with Jesus.”

“Let’s do something big together,” Paul Westbrook told messengers at Metro Community Church, his former church. Westbrook joined the IBSA church planting team in early 2022 after 31 years as planter and pastor in Edwardsville. He had been scheduled to bring the Annual Meeting sermon two years ago.

“I didn’t plant a church for the limelight,” he said. “I did it because I became increasingly convinced that people need Jesus.”

Before the home crowd, Westbrook used a large cardboard box to make his point. “I stepped out of the box I was stuck in, and I stepped into faith.” He related the journey that included a small start for the church planted by Oklahoma transplants, and sojourns of more than a decade meeting in four public schools as the church grew. He urged church leaders to “Multiply Illinois” by supporting church plants to reach the state’s nearly nine million lost people.

“Maybe you got stuck in a box, and you haven’t stepped out in faith,” he said. “Hebrews says without faith, it is impossible to please God. Not hard, but impossible.”

At the conclusion of the sermon, Westbrook destroyed the box and stood on top of the pieces as he prayed for a multiplying movement of church planting and evangelism in Illinois.

Missions partners brought opportunities to the assembly. Former Benton pastor Sammy Simmons, now with the North American Mission Board’s Send Relief, announced the “Send Relief Serve Tour” in Chicagoland next August. Volunteers from Illinois will engage a variety of missions projects in Chicago to open doors for witness. “No act of love is insignificant when King Jesus is involved in it,” Simmons said. Information is posted at ServeTour.org.

International Mission Board missionaries to Brazil, Rick and Jill Thompson, shared experiences from the field. Rick is from Illinois. He welcomed fellow Illinoisans to venture to the mission field, whether local or international. Jill encouraged the people to start simple: get a passport and pray.

Adams introduced the 13 churches that affiliated with the state association earlier in the day. Later he brought three church planters to the stage to share their stories.

Jacob Goble, planting pastor of Rooted Community Church in Lebanon described a town divided by State Highway 4, with “have’s” on one side and “have not’s” on the other. Lebanon is home to McKendree University with 2,000 students from 43 states and 43 countries. “We believe the world is going to be changed through Rooted Community Church,” Goble said.

Jose Nunez is pastoring Iglesia Buen Samaritano of Aurora. Through an interpreter, he explained the church started through 12-step programs for addiction and is ministering to first- and second-generation Latinos. “The support we have received from the Illinois Baptists and through your prayers allowed us to be with you. We thank you and we want to continue.”

Daniel Nemmers started Salt Church on the Illinois State University campus in Normal this fall. “We had our fourth kid two weeks before we planted the church. I wouldn’t wish that on anyone,” he said to laughter. “We’ve seen eight people saved and two people baptized. And I got to lead my neighbor to Christ.”

Two Illinois natives provided reports from national partners. Lifeway President Ben Mandrell of Tampico, Illinois focused on a new Bible study curriculum for churches outside the deep South. Mandrell was inspired by his experience as a church planter in Colorado.

Illinois’ own Sandy Wisdom Martin told a story of getting her mower stuck in a ditch. The Executive Director of Woman’s Missionary Union was mowing the grass when the mishap occurred. She waited, hoping someone with a truck and a chain would come by and pull her mower out. Someone did, and she likened that experience to the work of missionaries and churches. “When hope in Christ is all you have, hope in Christ is all you need,” she said. “We are at our best as Southern Baptists when we multiply our work cooperatively. She pledged the help of National WMU to all IBSA churches.

The new President of the SBC’s Ethics and Religious Liberty Commission appeared in person to make connections with Illinois pastors and leaders. Brent Leatherwood promised support for Illinois, where “progressive” government has made the state an abortion destination in the region.

“This is urgent work,” Leatherwood said. “It is not for the timid, it is not for the fearful…but as we partner with you and your church and your convention, it will allow us at the ERLC to speak more adeptly into the public square.”

Messengers acted on four resolutions, including transgenderism and the proliferation of gambling.

Pastor Bruce Kirk of Alpha Baptist Church in Romeoville brought a memorable moment in the final session. Telling a true story of a pastor who found a gas station lighted up late at night, but no one on the premises, the pastor said, “If you’re not doing business, take the sign down.”

In a rousing call, Kirk offered a personal testimony about witnessing to a dying man, in which he almost lost the opportunity share the gospel. Then he applied it to the church: “If you’re not preaching the gospel take the sign down!”