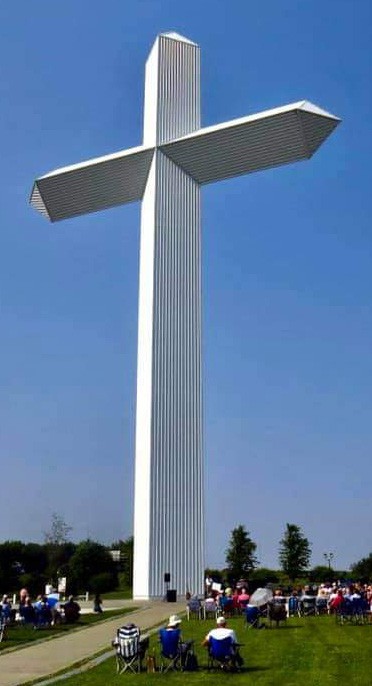 At the cross -- About 200 people gathered September 12 to celebrate the twentieth anniversary of the giant cross in Effingham, the largest in the United States.

“Twenty years ago, there was a question as to whether to carry on with that dedication,” Roger Marshall recalled of the opening ceremonies at the giant cross in Effingham. The ceremony had been planned for September 16, 2001. That was just five days after the terrorist attacks on the World Trade Center and the Pentagon. “But it was decided it would be a good thing to do–and it was,” Marshall said at a twentieth anniversary commemoration at the base of the massive cross at the intersection of Interstates 57 and 70.

As pastor of First Baptist Church in Effingham at the time, Marshall had participated in the first ceremony.

“People came to this place looking for some sign of hope,” Marshall said. “The cross is a symbol that gives us hope, gives us light, gives us the possibility of something even beyond the darkest of moments.”

He remembered turning the lights on for the very first time during that first dedication. “Before the evening was over, the cross was lit up for everyone to see,” he noted. “It was a special night.”

The idea of the cross was first introduced by John and Fran Schultz, who saw a similar structure in Groom, Texas. With the support of people like Bud Althoff, Henry Poterucha and Marshall, the idea gained momentum. “John told us about seeing the cross in Texas and wondered if something unique like that could happen in Effingham. That’s how it all got started.”

“We had a great turnout,” said Kayla Deters, who volunteered to oversee the anniversary event, which was attended by about 200 people, most bringing their lawn chairs. “It was an opportunity for the community to celebrate 20 years since the cross has been here. The cross is such a symbol of this community. This was an opportunity to share that with others.”

Deters was happy to volunteer because of the impact the cross has had on her life. “Sometimes, if I’ve had a bad day, I see the cross and drive to it,” she noted. “I can go there for some quiet time to reflect. When I’ve been gone, it’s so heartwarming to drive back into town and see the cross. It’s such an important part of our community.”

There have been countless stories from visitors and travelers about the impact the cross has had on their lives. Marshall, now an IBSA zone consultant serving six Baptist associations surrounding Effingham, mentioned one young man who was on his way to tell his parents goodbye and then to commit suicide. That was before he drove by the cross, and as a result, changed his mind. Hosts at the adjacent welcome center receive many reports from people affected by their encounters at the cross.

“For 20 years, it has been a symbol of faith, hope and life,” Marshall told the crowd. “It’s a reminder that Jesus Christ died on the cross (of Calvary) for our sins. He was buried and on the third day, he rose again. He did all of that as forgiveness for our sins. That’s the message of the cross. And for many more years to come, it will continue to have that message.”

–Adapted from an article by Steve Raymond, Effingham-Teutopolis News Report. Used by permission.