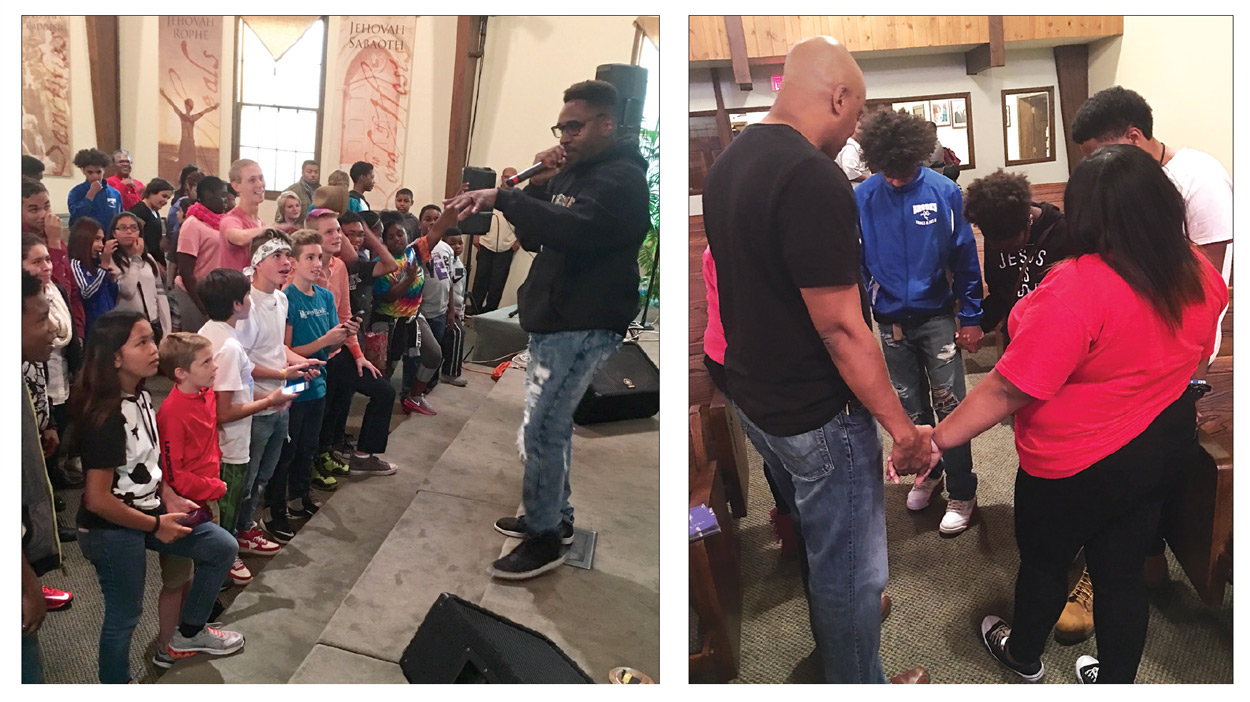 The past several American generations are known for their most distinct features and what they contributed to society in general: Baby Boomers shaped the country’s socioeconomic landscape. Gen-Xers brought a strong independent spirit to the United States. And talk in recent years has centered around Millennials, the group that came of age during a time of unprecedented technological strides.

But what about those who are growing up in a completely digital culture? Meet Generation Z, also known as Centennials.

There is some debate about the exact year Gen-Zers started being born; many place it in the mid-to-late 90s, or right after the turn of the century. What isn’t in doubt is that from the day they were born, Centennials have known nothing other than the Internet, touch screens, and smart phones. At school, they use laptops and tablets instead of textbooks.

“Technology is huge: If you’re not in the technology, then you’re losing,” said youth leader Cameron Lewis. “If you’re not posting posts and not constantly being active in kids’ lives in that, you’re really missing a huge part of the kids.”

Quick Stats: An Identity of Their Own

Born in the late 1990s and after, Centennials are in junior high and high school now, and just starting to enter college. These children of Gen-X have distinct characteristics all their own:

Lewis took a group of students from Cross Church in Carlinville to IBSA’s recent evangelism conference, Youth Encounter, where Centennials in their teenage years are the main audience. Almost 1,500 people attended YE at one of three sites—Marion, Decatur, and Chicagoland—and 351 made spiritual decisions at the conference, where the challenges of reaching Gen Z were front and center.

“They’re just pulled in so many directions that it’s hard to get them to focus on God,” said Angie Owens, a youth leader from First Baptist Church, Petersburg. One 15-year-old student agreed.

“We kind of get distracted easily because we spend so much time on our phones,” said high school sophomore Bailee Book.

Despite concerns about the technology, Owens said she sees the need to reach kids through it.

“Jesus said to meet them where they are, and then go from there,” Owens said. “We have to be able to engage them in a way that they’re familiar with. As a school teacher, one of the things that I’m taught is: ‘Know your audience.’ ‘Know your kids.’ That’s your number one rule. You start with where they’re at and then you go from there.”

Making sense of the noise

Not only have Centennials grown up with a knowledge of all things digital, they’ve also always lived in an increasingly diverse world, with decreasing Christian values and a tolerance for multiple definitions of faith.

Those characteristics can present an intimidating picture for churches. How do you reach young people with constant access to all kinds of information, and who are growing up in post-Christian America?

But some church leaders say churches have a unique opportunity to reach Generation Z in the midst of their questioning. Most Centennials are not opposed to having spiritual conversations; in fact, they welcome them. And their focus on technology gives churches a unique opportunity for face-to-face outreach, said Thom Rainer, president of LifeWay Christian Resources.

Gen-Z has a short attention span—as short as eight seconds, according to some studies. But that also has an upside, some say. Centennials are conditioned to take in new information very quickly. And what’s more, they’re hungry for it, already seeking out knowledge and greater understanding on various topics.

Lonnie Trembly, associate pastor of students at First Baptist Church, Columbia, recommends teaching theology, logic, worldview, and apologetics as early as you can. Generation Z can handle it. “And want to,” he said. Whether they’re believers or not, Gen-Zers are engaged and ready to hear what Christians have to say, so that they can decide if they agree or disagree as they develop and navigate their own beliefs.

But as one blogger said about Generation Z, “They have infinitely more distractions and noises preventing them hearing the call of God on their lives as clearly as they should.” Is the church is merely adding to the chaos?

Trembly answers this problem with a “less is more” model. As someone who has worked with different generations in the church for 25 years, he said, “Give them focused places to learn more. Too many websites, video clips, etc., pollutes the mind, [where only] a few gives them places to stay focused on.”

Gen Z is the most recent in a long line of American generations:

(1980-about 2000): Tech-savvy and connected, but willing to embrace “vintage” ideals, sometimes called Gen-Y.

Creative communication is key, some leaders say. “Kids are so bored with just talking or doing regular reading or Bible studies,” Angie Owens said. “I think we’ve almost got to add in a little extra.”

“It’s lighter, not as serious,” said Alexander John Work, a 15-year-old student from Carlinville High School. “But it’s easier to understand what the person’s saying—grabs your attention more.”

Owens said that it’s good when conferences blend learning about Jesus with some element of entertainment or humor in order to keep kids engaged—so long as the focus is clear. One of the Youth Encounter worship leaders was Andy Raines, also known as the Passion Painter. Raines creates works of art as part of the overall worship experience.

Owens emphasized that balance is necessary.

“We don’t want to go so far that we’re just entertaining,” she said.

Whether it’s through painting or preaching, Lewis said he loves how Youth Encounter 2016 is generating momentum for youth to continue growing in faith.

“I think there are big things in this next generation,” he said. “I think this is a generation that can change a lot of things and that is something I am all for and pushing them to do for Jesus.”