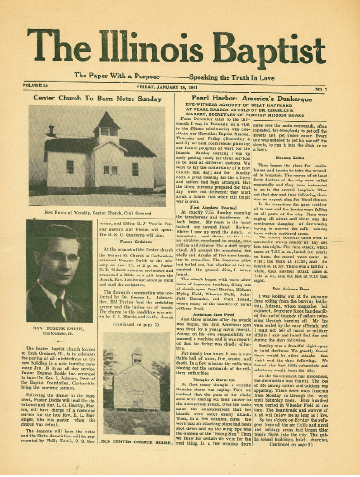 This copy of the Illinois Baptist from January 1942 was unearthed in a recent renovation of the IBSA archives. An eyewitness account of the bombing of Pearl Harbor by a Southern Baptist leader on the scene echoes the stories from IMB missionaries in Ukraine today.

Sunday, December 7, 1941: Charles Maddry was preparing for three worship services that morning with the fifteen missionaries serving through the Hawaiian Baptist Mission. Dr. Maddry was head of Southern Baptists’ Foreign Mission Board. He was in Honolulu for a three-day conference to plan missions on the islands.

“My room in the hotel looked out toward Pearl Harbor,” he wrote in a lengthy report published in the Illinois Baptist a month later. “At exactly 7:55 Sunday morning the treacherous and murderous attack began…wave after wave of Japanese bombers diving out of the clouds upon (the airfields) where many of the families of naval officers lived.

“For nearly two hours it was a veritable hell of noise, fire, smoke and death.”

Maddry saw the battleship U.S.S. Arizona ablaze and its sailors swimming through burning oil. He saw the bombing of the city in six waves. In all, 2,700 service personnel “were suddenly hurled into eternity without a moment’s warning,” he wrote. But it was the refugees that moved him most of all.

“By ten o’clock on Sunday (morning), the refugees from all the airfields and naval and military areas had begun their tragic flight into the city. The public school buildings, hotels, churches were soon crowded. Many mothers had fled with their little children without even a change of clothing. I had read of the horror of seeing refugees fleeing from burning homes and murderous war. Now I have witnessed it all.”

We have seen the same. How ironic it was that Maddry was on Oahu for the attack on Pearl Harbor. And how ironic that our new missionary colleague Shannon Ford, who served in Ukraine 18 years, had as his first day with IBSA March 1, a week after Russia launched its horrific attack.

This month we have witnessed war in real time on our screens in much the same way Maddry did from his hotel window. We have seen the bombing and the tanks and the resistance.

But it was when the missionary was sitting in the office with my colleague, Lisa Misner, that the tragedy was most real. He told us stories of his friends still serving in Kyiv and Lviv, who were helping the mothers and children run for their lives. He showed us pictures on his phone. And he put us in contact with IMB missionaries who asked for prayer, even as they stayed in the line of fire to serve in the name of Jesus.

Please forgive our presumption writing from safety half a world away, but as Maddry wrote of his gut-wrenching experience eighty years ago, “The heartbreak and sorrow of it all will follow me as long as I live.”