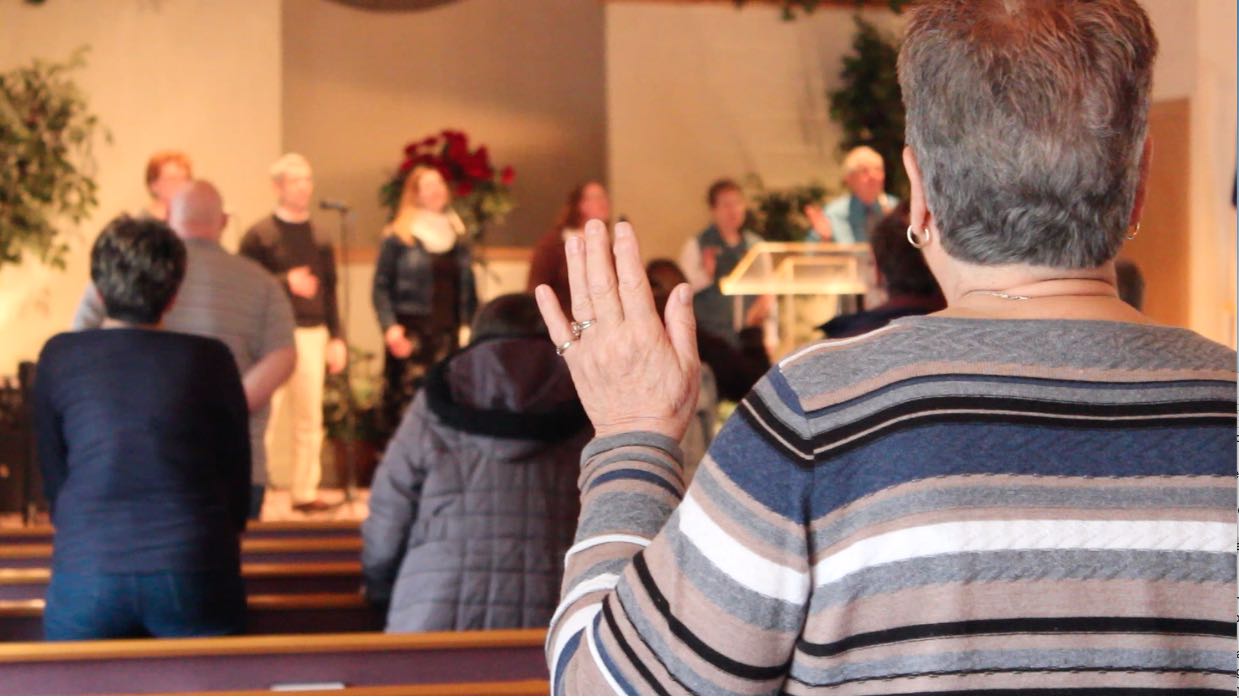 When Mike Young first laid eyes on Streator in 2016, he saw a small prairie town in the midst of vast farmland. But he also saw a community in great need of the gospel. Young, who moved to town to manage IBSA’s northern Illinois camp facility, soon discovered that much of Streator was still unchurched. He started praying God would raise up a church to fill that void.

When Young started looking for a church to join, there was one that caught his eye every time he’d go into town. “I would pass a church right on the edge of town called Calvary Baptist,” he said. “The building looked rough, and there were bushes growing all around it. It just looked like it was closing down.” Many people in town confirmed what Young had thought—that the church was on its way out.

Still, every time he passed Calvary, something kept tugging at his heart.

Struggling churches
“Calvary Baptist Church was a long-standing church in the community,” said Mike Blakemore (center in photo below). “It goes way back into the ‘50s, I believe.” 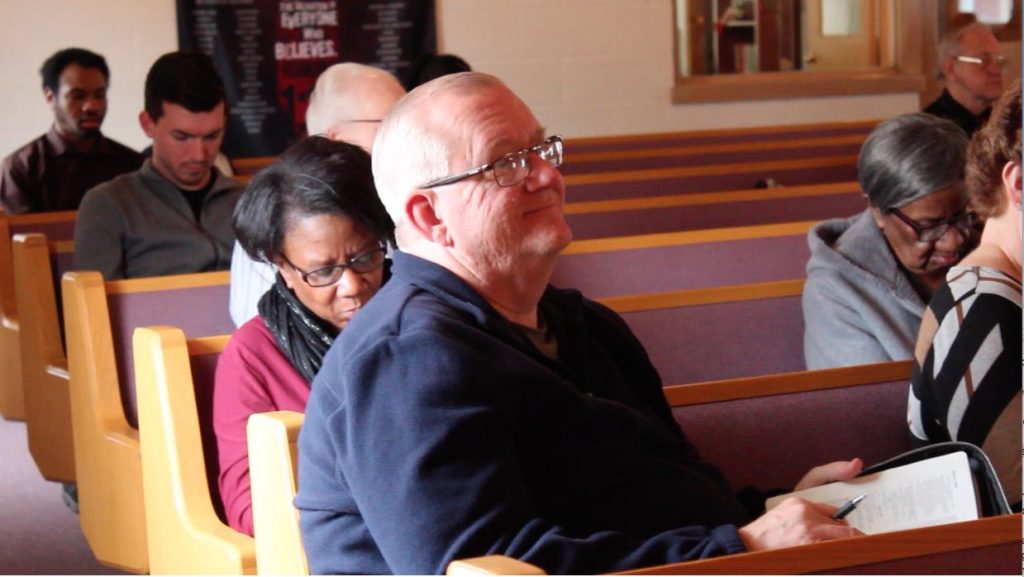 Blakemore and his wife started attending Calvary in the early 2000s; he eventually became an elder. “It was a great church, great pastor, great fellowship,” Blakemore said. But after their pastor retired, “that’s when the struggle began.”

The Southern Baptist church went through a series of interims and people just to fill the pulpit, and Calvary’s numbers started dwindling. Soon, wear-and-tear to the church’s building became evident, with mold growing inside the walls and roof.

By the end of 2015, with finances running low and numbers still dropping, the auditorium ceiling caved in after a severe hailstorm. “After much prayer and a lot of discussion, we decided to vacate the building,” Blakemore said.

A few miles away, Streator’s First Baptist Church had its own problems. The Conservative Baptist church was founded not long after Streator was incorporated in 1868. Longtime member Linda Abbot speaks fondly of her church. “I have a great, great grandfather who helped start this church,” she said. “My mother was part of this church. And when I was born, I was brought into it as well. I’ve been here ever since.”

At 13, she dedicated her life to Christ at the church. She brought her childhood sweetheart, Ken, to First Baptist where he, too, came to know Christ and eventually became an elder. The Abbots married at First Baptist and have raised their own children there.

“But in the years that we had been coming here,” Linda Abbot said, “we noticed the numbers steadily declining. And we could just see things falling apart.”

The numbers continued to decline until they were down to almost 20 people, forcing the once large church to close down its main building and move worship into the fellowship hall, a stand-alone, neighboring building.

The move was made to sustain the church, Ken Abbot said, with the knowledge that if finances dwindled to a certain level, the church would dissolve and its Conservative Baptist denomination would take over the building.

Meanwhile, Calvary sat empty for almost a year while worshippers met in homes or rented spaces, praying all the while for direction. “We had just been going from place to place, and the fear that came along with that is, how long is this going to work?” said deacon Mark Martin.

But, he added, the church’s predicament drove them closer to God. “And that’s what it did to everybody that was involved,” Martin said. “Because God doesn’t bring about situations like these to drive you away from him. There might be problems, but they are meant to bring you closer to the Lord.”

Still, the uncertainty was unnerving. After months of worshipping in different places, Calvary gathered for a prayer meeting in a home one Wednesday afternoon, bringing their future and their tattered building to the Lord.

Answered prayer
It was that same Wednesday afternoon when Mike Young, unable to shake the tugging in his heart, decided to finally investigate the rundown church building on the edge of town. He pulled into the church’s parking lot, found a phone number on the door, and called. “I explained who I was and asked if there was anything I could do. I thought maybe they would need help with their building. I could help with that,” said Young, who has facilitated extensive renovations at the camp.

“Right then, they stopped that prayer meeting and they answered the phone,” Young said. “They didn’t have a pastor, they didn’t have a building, but they still had that core group of people.”

The group eventually called Young to serve as interim pastor, sparking a new beginning that would soon include First Baptist. That church was still without a pastor, and wondering what to do with their building. That’s when they heard about Calvary.
“When we heard that Calvary’s roof caved in and they were without a building,” Ken Abbott said, “we started praying for them. And while we didn’t know it at the time, they, in turn, started praying for us too because of our situation.”

“It was a challenging year for all of us,” said Tim Walter, an elder at First Baptist. He and Abbot extended an invitation to Calvary to worship with them.

“We were two churches in need of each other,” Walter said. “They needed a church home. And we had facilities, but we weren’t using them because our building was pretty much all closed up.”

Calvary accepted the invitation, and the two churches held a worship service in First Baptist’s fellowship hall in January 2017. “Over time as we met,” Young said, “worshipping together became so sweet, and the fellowship was just excellent.”

At first, each church collected their own offerings and maintained separate prayer lists and bulletins. Church meetings were held in separate rooms. After a couple months of worshipping together, each church wanted a more long-term plan, and eventually took separate votes on whether to merge. The votes were unanimous—both churches were fully in favor.

Prayer, love, and willing hearts
Despite apprehension on each side that the other would want them to conform to their traditions, Blakemore said each church put aside their wants and traditions, focusing instead on God’s desire and Streator’s need for a thriving church.

Some described the experience as a marriage, with two parties making sacrifices toward a greater good. “When both churches came together, each naturally had their own tradition,” Young said. “But like any marriage, you have to give and take. And the two were willing to do that. They were willing to rely on God and trust him for the results. That is the most important part.”

“We had to come together as a new beginning,” Walter said. “The past is gone; First Baptist had to cease, and Calvary had to cease. As Dr. Dan Eddington told us, we had to have two funerals and a wedding for this to work.”

Both churches credit Young and Eddington, director of missions for Three Rivers Baptist Association, for guiding them through the merger. But overall, it was God, through prayer, that gave the churches their success.

“We had to bathe the entire process in prayer,” Blakemore said.

In September 2017, the two churches officially constituted as one, with a new name: New Beginnings Baptist Church. The church affiliated with IBSA last November.

“It’s new beginnings in a lot of different ways,” Martin said. “Not only is it a name for two churches coming together and a new start for a ministry, but it’s a new beginning for a work in Streator, as well as a new beginning to the lost who come here.” 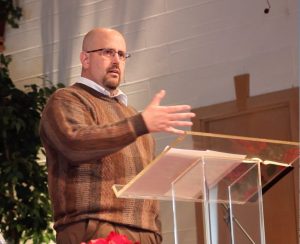 Mike Young continued as interim pastor until the church was able to hire their first full-time pastor. Aaron Jackson (left) has been serving as pastor almost a full year. “We’re already seeing what God is doing through ministries here at New Beginnings,” he said. “This is a very unchurched area and we’re doing as much as we can to get involved in the community.”

The church has moved back into the main building and has seen significant growth. They’re reaching out to Streator through multiple ministries. Walter describes the church as a family with a singular focus on Christ. “What is our mission? To preach the gospel and to proclaim Christ to a lost world. That is why we exist. And that’s our direction for the church: so that everything we do is to glorify him.”