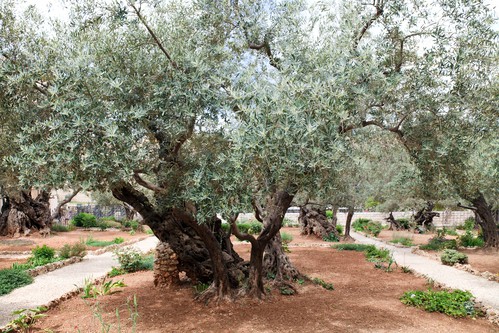 The place of ‘crushing’ is not a destination, but it is a good pit stop.

A Baptist pastor said in an article I read recently that Maundy Thursday has become his favorite day of the Easter season. That was surprising, he admitted, since he didn’t grow up observing the day before Good Friday as anything special. Nor do many Baptist churches. But as he was called to pastor a church with a unique Thursday night Lord’s supper service prior to Resurrection Sunday, he took on the observance and came to appreciate it deeply.

I understood his experience. A couple of churches I served added Thursday services to their pre-Easter observance. At first, it was a matter of convenience for those who would travel on Good Friday to spend the weekend with grandma. But eventually we found we ourselves needed more time in the garden before we stood at the foot of the Cross, and ultimately at the vacated tomb.

“Maundy” Thursday may sound mournful, but the name itself comes from the Latin for “mandate.” A new commandment I give you, Jesus told his disciples in the upper room on that night, that you love one another. Maundy is a manmade term, as is the “Good” of Friday, but as for the events that happened that night, they are by God’s design.

After donning the servant’s towel and washing his followers’ feet, then giving them his body and blood in the first Lord’s Supper, Jesus led the crew, minus Judas, to the olive press on the other side of the temple grounds. Calling it Gethsemane, we forget that this was a working vineyard, where the crop was grown and at its maturity harvested, then crushed to release its treasure and fulfill its purpose. (Makes you have new respect for that bottle of oil in the cupboard, doesn’t it?) There, kneeling among the gnarled trees and the stone pressing floor, Jesus appears at his most human: suffering, knowing greater suffering was just ahead, wrestling, and yet willing.

And if we left the account there, we would miss several deep truths that make the events of Thursday night crucial to our understanding of Sunday’s victory. We might be tempted to think of Jesus as somehow less than fully human, that his deity abated his agony, if we did not see him wrestling in prayer while even his closest supporters a few yards away abandoned him in favor of sleep. We might miss a point of deep personal connection to Jesus that we need in our own times of crisis.

In Gethsemane, the Father prepared the Son for the cross before him. Luke, who diagnosed Jesus’ suffering as bloody even in the garden, also tells us that God sent an angel to minister to Jesus.

The agony won’t last forever, but God knows we need help to get through it. And he sends it by his holy messengers. In our own seasons of crushing, we are lifted with the news that God has a purpose for the suffering he allows, and that it is temporary. God knows we hurt; God sends help; God sets a time limit.

In those times, it helps to know that Jesus suffered too. He cried over Lazarus. He cried out on the cross. And he endured in the garden where any remote possibility that he might put his relief ahead of our need was crushed: Not my will, but Yours be done, he said to the Father. We speak of “The Lord’s Prayer” as our model prayer. It, too, says, “Thy will be done.” But in Gethsemane, the prayer is tested and proven, and Jesus comes out the other side fully committed to finish his mission—at all personal cost to himself.

Finally, Gethsemane points to victory. To know the exhilaration of Jesus’ triumph over Satan and hell and sin and death, we must endure with him in his Gethsemane—and ours. In trial, we can be assured that Jesus has been here before. And though it hurts—a lot—we must not rush past Gethsemane, or we miss the magnitude of the victory, when the darkness of Thursday night surrenders to the brilliance of Sunday morning. And that light you see is the Son.