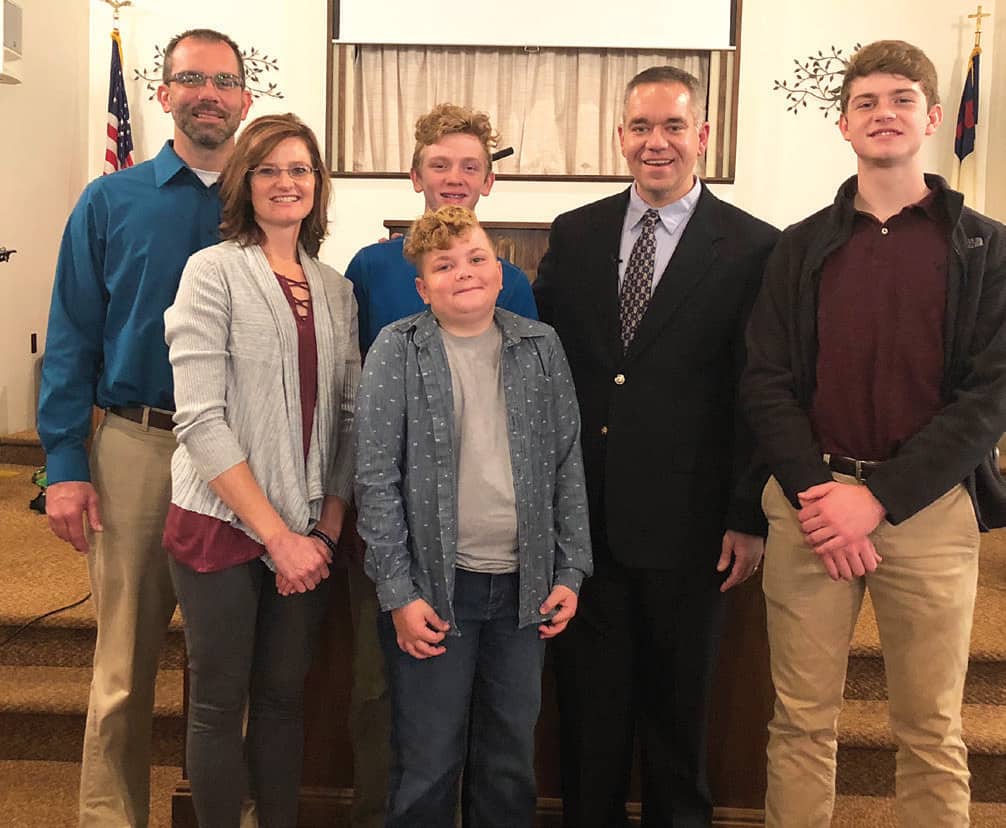 The Mevert family with pastor Scott Foshie (second from right).

“Glory to the newborn King!”

Peace on earth, and mercy mild,

At Christmastime, the familiar refrain echoes in our churches, our stereos, even our shopping malls. It’s so familiar, in fact, that the magnitude of the concepts in Charles Wesley’s hymn may be easy to overlook. Even at Christmas.

God and sinners, reconciled. Listen up, the angels say. Lend an ear. This is big news.

Wesley’s original intent was to set his “Hymn for Christmas Day” to a slower, more solemn tune.

He also wrote verses we don’t sing today, including one in particular that is steeped in imagery of dark and light, of sin and holiness, of the differences between us and Christ.

Wesley’s verses aren’t very Christmas-y, at least not in a tinsel and trees, lights and presents kind of way. But it’s easy to imagine it sung in a hushed stable, long after everyone should be asleep, when the import of what’s just happened is becoming ever more clear.

Fix in us thy humble home;

Bruise in us the serpent’s head.

Thine to ours, and ours to thine.

The “mystic union” Wesley describes is at work every time a sinner turns to Jesus. We’re reconciled to him in one sense of the word—a broken relationship is repaired—but there’s more.

Our purposes are also aligned with his. Our very nature is back in step with our Creator’s.

Matt Mevert and his wife, Andrea, grew up going to church. In fact, they went to the same church. They were married there and raising their family there, until recently, when something shifted.

“I started to realize that there was something missing, but I don’t even think I realized it before,” said Matt, who owns an auto shop in Steeleville.

The Meverts came to a place in their lives where they realized worshiping God and praying to him could be personal and dynamic—that they could have a relationship with him.

They were baptized Dec. 10 at Steeleville Baptist Church in front of their new church family and their three sons.

For while we were still helpless, at the right time, Christ died for the ungodly (Rom. 5:6, CSB).

“All around us, we are surrounded by people who have a God-sized hole in their hearts,” said Scott Foshie, the Meverts’ pastor. “We are all made to enjoy a relationship with him, but our sin has separated us and we are enslaved by it.”

But God proves his own love for us in that while we were still sinners, Christ died for us (Rom. 5:8).

For Matt and Andrea, a host of factors led to their decision to follow Christ. Their oldest son joined a Bible study and started asking questions about the Scriptures. They attended a summer revival and felt God moving them to make a new commitment to him. And they started studying the Bible.

“At that point, you can’t get enough of it,” Mevert said of the Bible. “You start studying and making opportunities to learn more all the time.”

“In Matt’s case, while he grew up in church, he realized that even though he knew a lot about God, he didn’t know God personally,” Pastor Foshie said. “He was lacking the experience of being born again and experiencing the saving power of knowing Jesus.

“The Holy Spirit revealed Matt’s need to be born again, and he responded in simple faith.”

And not only that, but we also rejoice in God through our Lord Jesus Christ, through whom we have now received this reconciliation (Rom. 5:11).

“Without Jesus, our lives are empty and meaningless,” Foshie said. “Those of us who know him need to use the Christmas season (and every season) to offer the Good News that we can come to Christ and truly be reconciled to him.”

In her work at Angels’ Cove Maternity Center, Carla Donoho sees people in need of reconciliation. With their families, and with God. But it often doesn’t come easily.

“Accepting the love of a Heavenly Father is foreign and difficult when many have no father in their lives or the ones they have do not represent love,” said Donoho, who directs Angels’ Cove, a ministry of Baptist Children’s Home and Family Services.

“For those who have come from difficult circumstances, either from their own doing or acts of someone toward them, seeing the love of God through his people is a miracle.”

Apostle Paul describes that miracle in 2 Corinthians, and gives a clear directive to those who have experienced Christ’s reconciliation.

Everything is from God, who has reconciled us to himself through Christ and has given us the ministry of reconciliation (2 Cor. 5:18).

“Nothing thrills me more than to see one of ‘ours’ come to know Jesus as the loving Savior who has given himself for them,” Donoho said. “Those who feel so unloved, rejected, and unwanted realize they are a child of the True King. This is true reconciliation.”

Scott Foshie heard the message of reconciliation at nine years old from his grandmother, Lois, when she was suffering from cancer. Even if she lost the battle, she told him, she knew she would be with Jesus because she had given her life to him, and he had forgiven her sin.

The ministry of reconciliation is at work whenever a Lois or a Carla Donoho or a Pastor Scott or a Matt Mevert shares the work of Christ in their own lives.

That is, in Christ, God was reconciling the world to himself, not counting their trespasses against them, and he has committed the message of reconciliation to us (2 Cor. 5:19).

At the manger, God extended reconciliation through his son, Jesus. On the cross, the offer of reconciliation is completed through Jesus’s death for the world’s sins. Charles Wesley married two holy days—Christmas and Easter—and the reconciliation seen in both with another of his hymns for Advent, “Come Thou Long Expected Jesus.”

Born to set Thy people free;

From our fears and sins release us,

Let us find our rest in Thee.

Hope of all the earth Thou art;

Dear desire of every nation,

Joy of every longing heart.