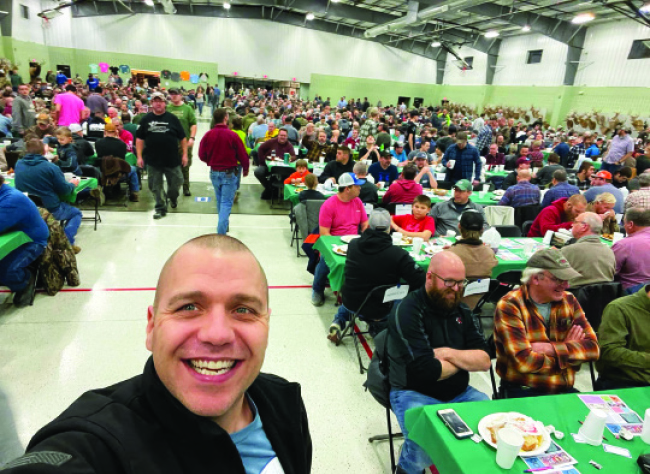 Men’s ministry leader Josh Cross and a group of 25 from Crossroads Church in Centralia joined 1,300 others to hear Alan Robertson of Duck Dynasty fame share his faith.

“I expected in 2021 there would be a massive flood back into the church because they had spent much of 2020 watching online,” said Ronnie Tabor, pastor of Crossroads Church in Centralia. “That was the vision we started out with, but it didn’t quite turn out that way.”

What did happen was much better, but it took a little time to get the “tidal wave” Tabor hoped moving.

Tabor was called as pastor of Temple Baptist Church in 2018, but it was almost a year later that he was able to arrive on the field. When he came, average Sunday attendance was between 40 and 60. One member described the 90-year-old church as dry, but Tabor insisted, “This church wants to grow.”

Then, just as the new pastor was getting his ministry started, the pandemic forced a shutdown for 12 weeks. The closure caused Tabor to speed up his plans for reaching the community online. “We didn’t have a live feed or a strong social media presence,” Tabor said. “I didn’t want to start anything we couldn’t sustain.”

And the congregation voted to rename the church to reflect the new things they anticipated God would begin doing. When Tabor invited people to attend, they would say “Oh, I went there once, seven years ago.”

But the real change wasn’t in the web presence or the sign out front. The pastor said the real change has happened in the lives of church members. “They have taken their faith outside the safe space with people they know and have really been bold in sharing their testimony,” Tabor said. “They’re excited about what God is doing in their lives.” And they’re telling others.

God’s move in the congregation began just before Easter with a sermon series and small group studies in members’ homes on life transformation. The pastor focused on evangelism as a lifestyle commitment. “The reason we have been left here on earth is to help other people get saved,” he said.

In 2021, 97 people made professions of faith and the church baptized 62 people, compared to 14 baptisms the year before. And in the first six weeks of 2022, 10 people have made faith commitments and 7 were baptized. One-third of those faith commitments happened outside the church, in the context of personal relationships of the members.

“These are people who are excited about what God is doing in their lives and sharing their testimonies,” Tabor said. “Because people were seeing the changed lives of their moms, their brothers, and others, they were asking questions. And it was easy to invite people to church.”

The rebirth of the church means attendance of 120 most Sundays. Basically, it’s a brand new church, and the membership is unified with the same message: Share the gospel, with every person, at every opportunity.

At a recent worship service, a woman named Molly Brown described her life as “a hot mess express.” She had been abused, addicted, isolated, and confessed she was a bad wife and mother. “No one really knew how far gone I was,” she testified.

“This was a textbook example of someone calling to God,” Tabor said. The first person who heard her was a deacon’s wife who knew Molly ten years earlier, saw her plea online, and invited her to Crossroads Church.

Molly came—and came to Christ. And the rest of her family followed. Homeless less than a year ago, “God gave me and my family the peace we need….There’s not a day that I fear,” Molly told the church in February.

The culture of evangelism, sharing God’s goodness in each other’s lives, is simply the way it works at Crossroads now.

– with reporting by Ben Jones