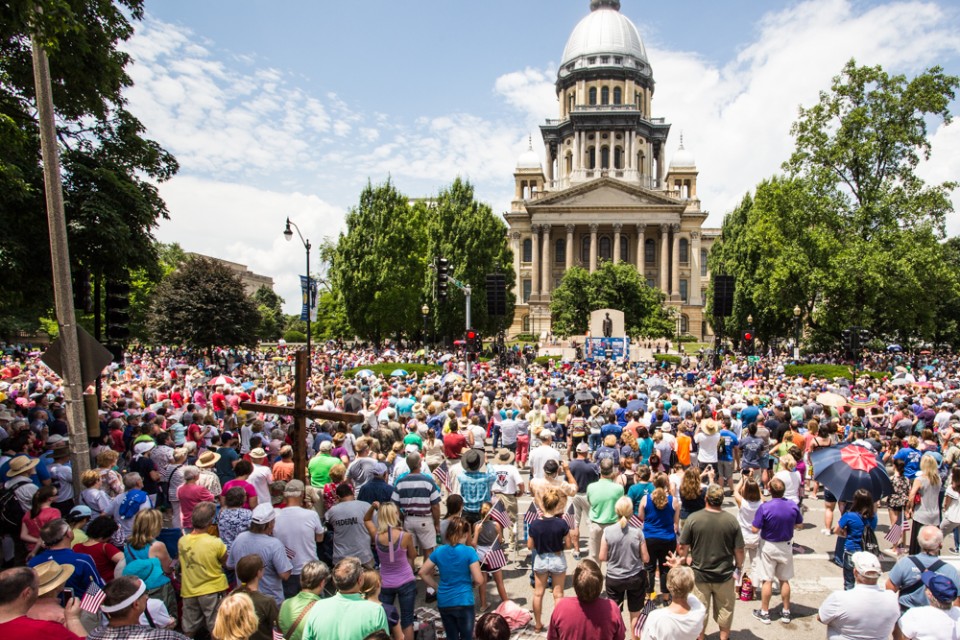 “The only hope for the United States of America is the Almighty God,” evangelist Franklin Graham told a crowd estimated at 6,000 in front of the Illinois State Capitol. “I have no hope in the Democratic Party, and I have no hope in the Republican Party,” Graham said, in a speech urging increased Christian involvement in the election process. He endorsed no candidate, but called on Christians to pray and vote.

The Tuesday, June 14 stop on his 50-state “Decision America” tour brought an enthusiastic crowd to the steps in front of the statue of Abraham Lincoln. Church busses were parked along the streets around the capitol, and the crowd enthusiastically sang “How Great Thou Art” and a number of other well-known gospel songs preceding the rally.

The eldest son of famed evangelist Billy Graham, Franklin brought greetings from his 97-year-old father, and then led prayer for the people affected by the mass shooting in Orlando the preceding Sunday. Using the tragedy as an example of our nation’s sinfulness, Graham said, “Our country is in trouble spiritually, racially, economically, and politically.”

Reading from Nehemiah 1:2-7, a passage illustrating the sinfulness and disobedience of the Israelite people, Graham emphasized how easily biblical and moral walls can come down. Just as Nehemiah fasted and prayed over the sins of his people, Graham urged the crowd to do the same thing. People in the crowd held hands as Graham prayed.

After interceding for local law enforcement and government leaders, Graham shared the Gospel and the path to salvation.

Moving on to focus on the current election, Graham was adamant that the easiest thing Christians can do to start enacting biblical change in our country is to vote – vote for candidates who stand for biblical principles and actually live them. When that choice is not immediately obvious, he encouraged that we pray for God to reveal who to vote for.

Stating that an estimated 20 to 30 million evangelical Christians did not vote in the last election, Graham offered a simple prompt: “Get involved. We’re losing our country, friends.” Christians must make their voices heard if America is to be preserved, he said. “For unless America turns back to God, repents from its sin, and experiences a spiritual revival, we will fail as a nation,” Graham said, “and I believe God honors leaders in high places who honor Him.”

Without telling the people who to vote for in the upcoming presidential election, Graham asked the crowd to make a pledge: to daily live out biblical principles, honor God in public, vote for political candidates if at all possible who uphold biblical standards, pray for our country, and lastly, consider if God so leads, to run for office.

“Our job as Christians is to make the impact of Christ felt in every [area] of life—religious, social, economic, political,” Graham said. “But we can only do [this] as we surrender ourselves completely to God, allowing Him to work through us… Let’s elect men and women to office who will lead this nation back to really being one nation under God.”

Graham’s next scheduled stop was Madison, Wisconsin, where some religious leaders were planning protests.