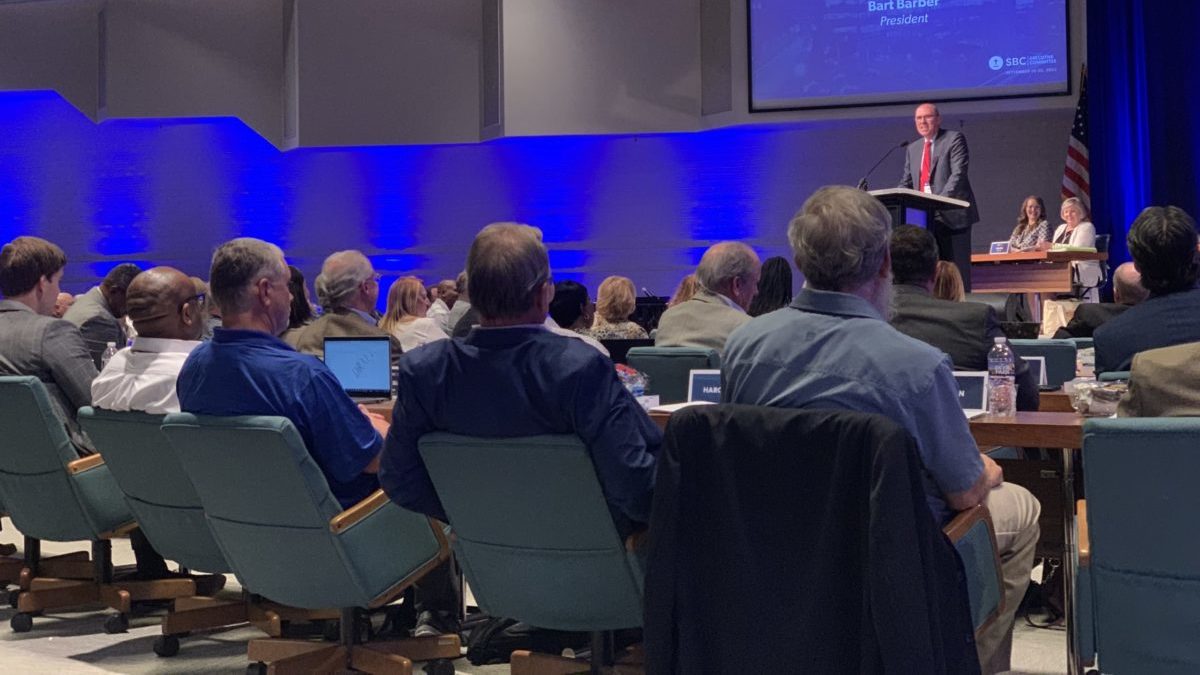 Bart Barber, president of the Southern Baptist Convention, urged the SBC’s Executive Committee during its Sept. 19 meeting in Nashville to stay “vigilant against corruption,” while also passionately supporting those who are preaching truth in dark places around the globe.

During his 20-minute message, Barber also announced the theme for next year’s SBC Annual Meeting in New Orleans: “Serving the Lord, Serving Others,” taken from 2 Cor. 4:5. He noted he believes the theme truly captures who Southern Baptists are.

“If any community has seen what Southern Baptists are like, serving other people in the name of Jesus, it’s been New Orleans,” said Barber, pastor of First Baptist Church Farmersville, Texas.

The people of New Orleans, he added, “are very familiar with the yellow caps and yellow jackets [Southern Baptist Disaster Relief volunteers], where we have gone after hurricanes and flooding, where we have ministered to people who were out of their homes, and sometimes out of hope.”

“So it excites me to think about banners going up in New Orleans, for the population of New Orleans to see that Southern Baptists are coming with a heart of service.”

Preaching from 2 and 3 John, Barber shared a message that he taught to church leaders in Senegal during a recent short-term missions trip. In that message, Barber noted, he found a message for Southern Baptists in the “crack in the pages” between the two books.

“The letter of 2 John is an encouragement to the church to be vigilant against the corruption that comes when false teachers are able to make their way into the churches and lead people away from the faith,” Barber said. “Because many deceivers still go out into the world, heresy is all around us.”

More than ‘a nice option’

He also noted that 3 John must be taken into account, too.

“There’s not just the danger of participating in something bad,” he noted. “You also have to recognize that there is a divine obligation to support the work of those who are proclaiming the work of the gospel in truth and fidelity in the Scriptures.

“We do not give at First Baptist Farmersville through the Cooperative Program just because we think it’s a nice option,” Barber said.

“We give through the Cooperative Program because we believe God wills it,” he added. “Because we believe that the people who have gone to far flung and dangerous places around the world to share the gospel have gone out from our church and churches like ours.

“If we will not be partners with them and the good work of the Holy Spirit that they have engaged in, who will?”