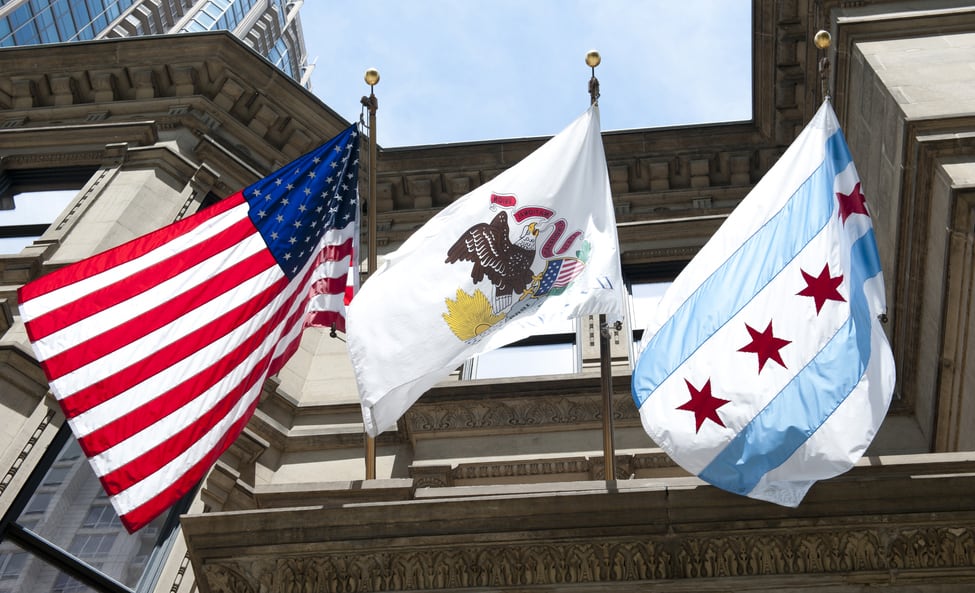 Flags of The United States, Illinois State and Chicago are seen hanging on a building in Chicago.

Chicago | Chicago Mayor Lori Lightfoot threatened to fine the three churches that reopened May 17 violating Governor JB Pritzker’s stay-at-home executive order. She followed through with it by issuing citations and fining the churches $500 each on Wednesday, May 20.

The churches, none of which are Southern Baptist, are Elim Romanian Pentecostal Church, Metro Praise International, and Philadelphia Romanian Church. All three had various social distancing measures in place when their congregations met.

Cristian Ionescu, senior pastor of Elim Romanian, told the website BlockClubChicago, “The citation they gave me is for disorderly conduct, which is pretty hilarious. It’s like they think I was drunk and fighting in a bar or something.”

According to NBC 5 Chicago, Dr. Willie Wilson, a Chicago businessman and former mayoral candidate, announced he would pay the churches’ fines. “I am going to pay the fine for these three churches, that in spite of intimidation by Pritzker and Lightfoot, dared to worship,” he said. “It is shameful that the church is discriminated against while liquor stores, marijuana dispensaries and Home Depot are treated as essential businesses.”

Early that Sunday morning, notices banning parking from 7 a.m. to 9 p.m. were placed throughout the neighborhoods surrounding the churches. CBS Chicago shared a statement from another of Elim Romanian’s pastors, Florin T. Cimpean, “The police called me to inform us that they were asked by the mayor to put up the signs. It is completely ridiculous. The mayor is inciting hate against the church which is very sad. A lot of our members risked their lives to escape Communism, only to find it germinating in 2020 under mayor Lightfoot in Chicago.”

In a statement issued this week from the Chicago Police Department, city residents were asked to stay home and practice social distancing so they might return to religious services in a safe manner when the city does begin to reopen.

CPD said, “Officers will continue to monitor any possible large gatherings in their districts and issue any citations where necessary.”

On Monday, Lightfoot asked churches to wait to hold services until the city begins to slowly reopen in June. Lightfoot said, “We want to do it in partnership with members of the faith community and come up with guidance that others can follow.”

Under the governor’s ReStore Illinois Plan, public gatherings are limited to 10 or fewer people until the state reaches Phase Four of the plan. In Phase Four, groups of 50 or less can meet. It is not until Phase Five that larger groups are allowed. Currently, all four regions of the state are in Phase Two.

Elim Rominan announced it will be having services Sunday, May 24. According to a media release, the church will bring in megachurch Pastor Brian Gibson, founder of the PeaceablyGather.com movement, to speak that day. He is senior pastor of HIS Church, a nondenominational church with congregations in Owensboro, Ky. and Henderson, Ky.

Elim Romanian and Logos Baptist Ministries in Niles had previously gone to court to ask for a temporary restraining order to be allowed to hold services. The order was denied by U.S. District Judge Robert Gettleman who called them “selfish.”