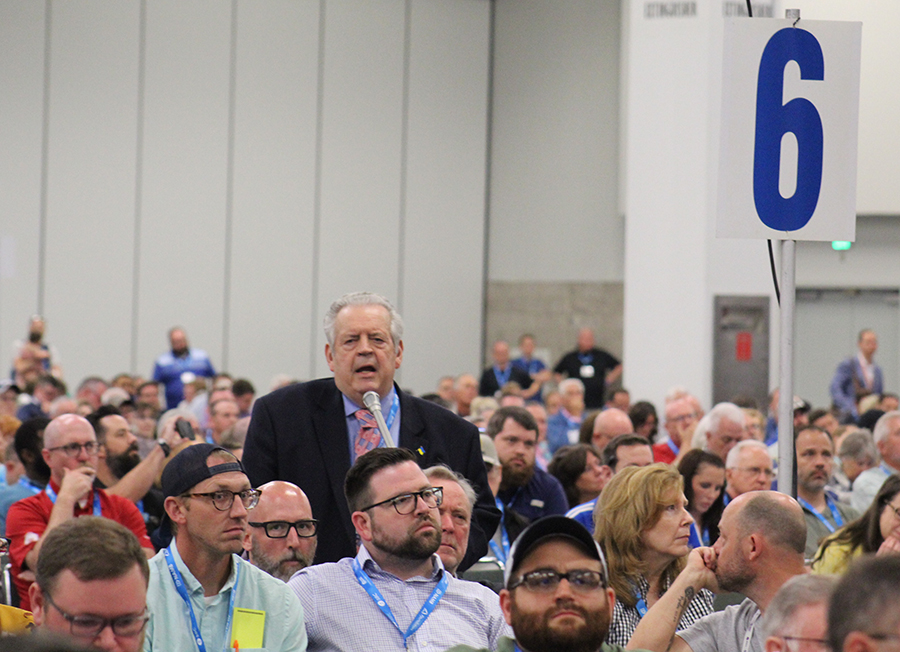 The SBC’s Ethics and Religious Liberty Commission survived a ballot vote to defund it, and is poised to fight another day on issues including abortion and expected battles in state legislatures.

A plea by Richard Land, first president of the ERLC, capped a brief debate over defunding the sometimes troubled agency that has been accused of being too far removed from its grassroots funders.

“I would implore you not to defund the ERLC,” Land said from a floor microphone at the SBC Annual Meeting Wednesday in Anaheim, California. “Southern Baptists have a unique voice in the world because of the ERLC.”

Land spent 30 years heading SBC’s lobbying for religious freedom and pro-life issues, before he was succeeded by Russell Moore in 2013. Under Moore, the ERLC was accused of not representing the majority opinion of Southern Baptists, particularly on matters of national politics and immigration. Moore resigned in 2021 after squaring off with Executive Committee president and CEO Ronnie Floyd over handling sexual abuse.

“Abolishing the ERLC is better than funding a compromised ERLC,” said one messenger, Josh Abbotoy of Houston who has written on the issue. “People use the ERLC for political ambitions,” he told messengers.

Characterizing the distance between the entity and the churches, he said, “Too often the leadership speaks for D.C. to the pews, not for the pews to D.C.”

ERLC’s Acting President Brent Leatherwood said that as he followed Moore, he told the ERLC staff to “double down” on their mission, especially in light of the pending decision on Dobbs v. Jackson Women’s Health, which would overturn Roe v. Wade, if the leaked U. S. Supreme Court ruling is finalized.

“Our advocacy is needed now more than ever,” Leatherwood said in defense of the ERLC. There is an opportunity coming with Dobbs ruling to take a state-by-state approach to make sure abortion is not “enshrined into law” in those states, such as Illinois, which are not notable pro-life.

Land agreed. “This is a damaging moment to defund the ERLC,” he said. ERLC can be a good provider of pro-life lobbying resources in the coming conflict, land said.,

The motion that would abolish the entity was like taking a cannon to a mosquito, he said. “The mosquito dies, but there is great destruction as well.”

The messenger who brought the motion, Josh Scruggs of Louisiana, said he hoped to end the divisiveness surrounding the ERLC. “Our division is disgraceful,” he said.