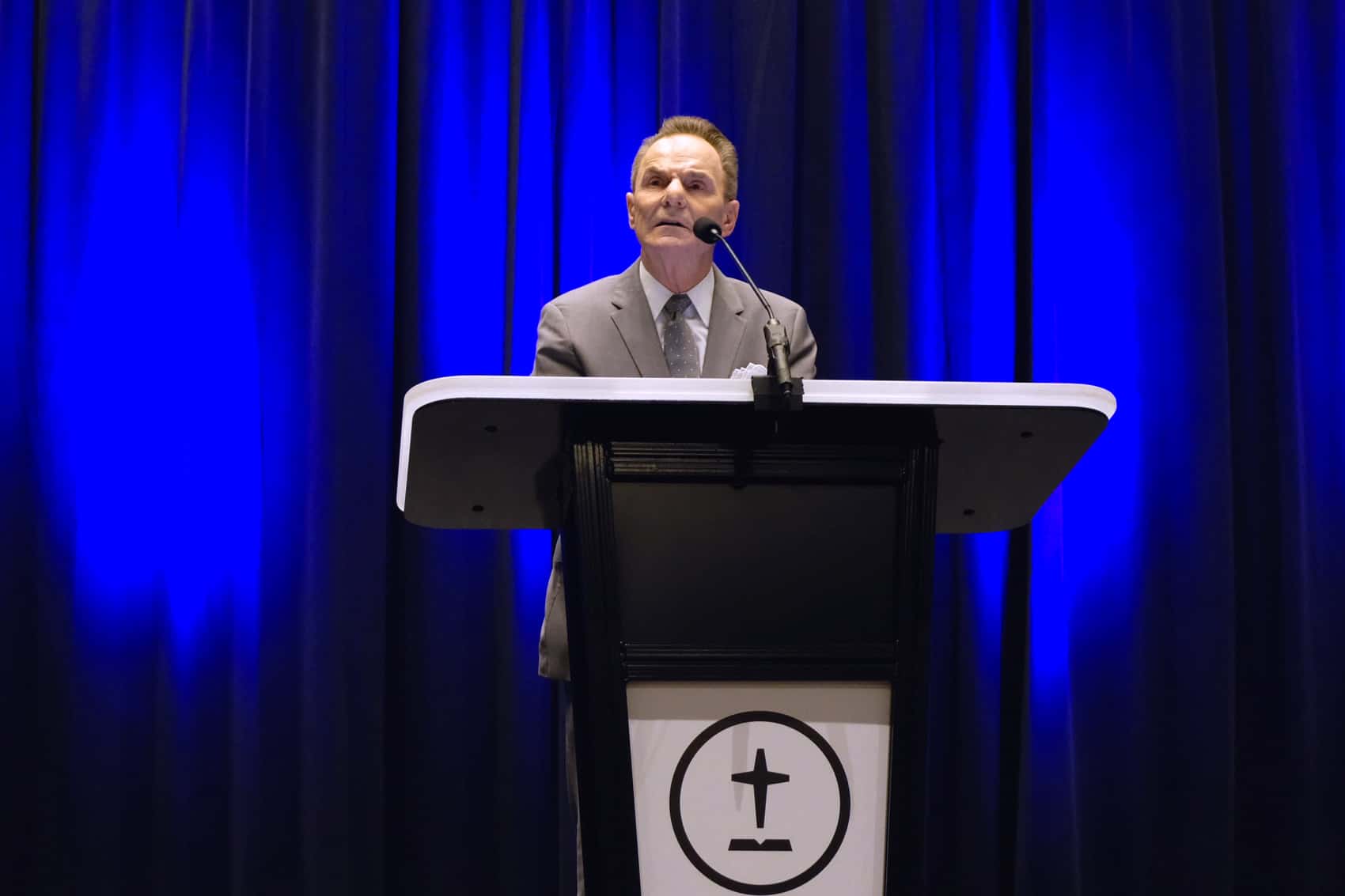 The SBC Executive Committee gathered Feb. 22-23 for the first time since COVID-19 shut down virtually all in-person meetings. The Nashville meeting was marked by leaders’ calls for cooperation amid several public fractures in Baptist life: racial tensions, a dispute between six state conventions and the North American Mission Board, and a recently released report questioning the direction and activities of the Ethics and Religious Liberty Commission (ERLC).

“This ‘sound of war in the camp’ of Southern Baptists is concerning to me and I know it is also concerning to many of you. While we hear and see how the American culture is so out of control, my friends, our own culture within the Southern Baptist family is also out of control,” Floyd said. “We are living downstream of this current culture in American life rather than living upstream against the currents.”

Rolland Slade, elected last year as Executive Committee chairman, convened the meeting by encouraging members to turn off their phones and refrain from tweeting or posting. “Let’s lay down our swords, lay down our disagreements,” Slade said, “and come together as brothers and sisters in the Lord.”

During the meeting, the Executive Committee also disfellowshipped four churches—two for affirming homosexuality within their memberships, and two for employing convicted sex offenders. The Executive Committee’s decisions followed the recommendations of the SBC Credentials Committee.

Task force issues ERLC report
A task force appointed last year to study the ERLC found the entity’s current direction “is a significant source of division,” the group’s chairman said upon releasing the report Feb. 1. The task force was appointed last year by the Executive Committee to determine whether the ERLC’s actions have had negative impact on giving through the Cooperative Program.

In their report, the group outlined how it elicited feedback from executive directors of state/regional Baptist conventions. The 15 leaders that responded represent conventions with 60% of the churches in friendly cooperation with the SBC, the task force reported, and 74% of the total Cooperative Program dollars received by the SBC Executive Committee. There are 41 Baptist state and regional conventions.

While several conventions reported little to no negative effect, the task force said, others “reported more significant challenges, including churches that have withheld funds, have negatively designated funds, or are considering doing so because of their concerns with the ERLC.”

The task force issued six recommendations, including asking the full Executive Committee to request that the ERLC board of trustees “encourage the president and staff to refrain from opposing specific candidates for public office.” ERLC President Russell Moore was a vocal critic of Donald Trump leading up the 2016 U.S. presidential election. He apologized shortly after the election to those who felt he had criticized all who voted for Trump. But some churches temporarily escrowed Cooperative Program giving because of the ERLC’s positions on certain issues. In 2020, Moore called on President Trump to resign after the Jan. 6 riot in the U.S. Capitol.

David Prince, chairman of the ERLC’s board of trustees, told Baptist Press he hoped that with release of the report, Southern Baptists could move forward.

“I think Southern Baptists can see this report for exactly what it is and are ready to move on from this moment and focus on our mission together,” he said. “The ERLC has served Southern Baptists faithfully during a time of political, cultural, and in some cases, denominational chaos….all this and more is why I am grateful the ERLC serves our churches with a vibrant and bold gospel witness day in and day out.”

Mike Stone, chairman of the task force and a candidate for SBC president, presented the report at the Nashville meeting and answered questions from the Executive Committee. He further addressed the report in a Feb. 11 interview with Gerald Harris, former editor of Georgia’s state Baptist newspaper. He said the report gave facts “with which the SBC must contend.”

“Under our trustee system, messengers do not hire or fire entity heads,” Stone said. “That duty belongs to the boards of trustees. But I believe messengers to the next several annual meetings are going to have to decide if an ERLC, led by anyone, is the best and most effective means of addressing the public policy concerns of the Convention, especially when its current leadership has placed multiplied millions of mission dollars in jeopardy.”

States dispute funding
Prior to their Nashville meeting, Executive Committee leaders addressed conflict between the North American Mission Board (NAMB) and six Baptist state conventions. In 2020, executive directors of the six conventions sent a letter to the Executive Committee expressing concern about funding and strategy changes by NAMB that affected ministry in their states. (The states/regions represented in the letter are Alaska, California, Hawaii Pacific, New Mexico, the Northwest, and Ohio.) In January of this year, the Executive Committee released a white paper titled “Cooperation is the Way Forward” in response to the letter.

The document encouraged NAMB “to find every way possible to push more resources into these areas” and advised the states and NAMB to work in cooperation with one another. Three of the conventions—New Mexico, Ohio, and Hawaii—have recently had productive discussions toward renewed cooperation agreements with NAMB, Baptist Press reported, and further discussions are scheduled with the Alaska Baptist Convention. But conventions in California and the Northwest have yet to resume cooperative talks with NAMB.

Randy Adams, the executive director of the Northwest Baptist Convention and an announced candidate for SBC president, called the response “dismissive and damaging.”

Greear calls out ‘pharisaical spirit’
Saying the global pandemic didn’t cause the crisis in the Southern Baptist Convention, but revealed “a deeper, more insidious crisis,” SBC President J.D. Greear challenged Executive Committee members to “repudiate” a pharisaical spirit and unite for the sake of the gospel.

“The last year has revealed areas of weakness in our beloved convention of churches,” Greear said during his president’s address in Nashville. “Fissures and failures and fleshly idolatries. COVID didn’t produce these crises. It only exposed them.”

Greear, senior pastor of The Summit Church in the Raleigh-Durham, N.C., area, continued as SBC president for a third year because of the cancellation of the 2020 SBC Annual Meeting. Religion writer Kate Shellnutt tweeted during his frank message that Greear preached “like a guy who had to lead for a third year he didn’t sign up for.”

He quoted James’s reasoning from Acts 15:19: “We ought not make it hard for Gentiles who are coming to God.”

“At the end of the day, if we’re a people who puts the gospel above all…our gospel is too precious and our mission is too urgent to let anything stand in our way.”

-By Illinois Baptist staff, with reporting from Baptist Press in Nashville