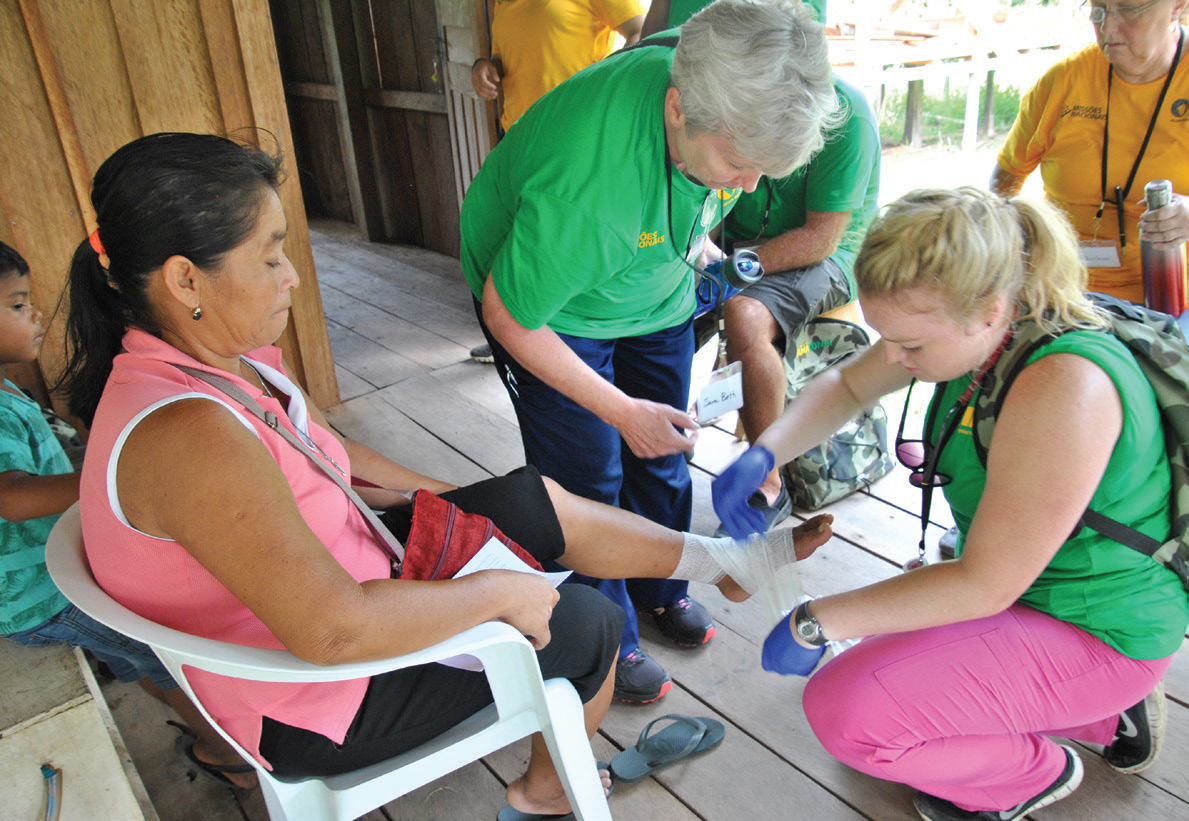 When we left Brazil and moved straight to Africa in Oct. 2006, the goodbyes at the airport were about as difficult as telling our family goodbye and moving to Brazil from the U.S.! Our hearts were torn between the country and the people we loved, and following God’s call to move to Africa. We wondered if we would ever see these people again this side of heaven.

Now, 11 years later, our hopes have come true as we are blessed to be leading a volunteer team of Illinois Baptists back to Brazil—our first return since leaving in 2006.

We’ve hosted so many volunteer teams as missionaries overseas that we’ve lost count—but this will be the first time we are American volunteers heading overseas for a volunteer team trip. Quite a new perspective!

When we were approached by Dwayne Doyle at IBSA about leading a team back to one of the countries where we served, our first thought was to return to Kenya, where we had just started working with an unreached people group.

But God had other plans.  When the door obviously closed to us returning to Kenya, we thought a trip was out of the question. Over the years, we had some contact with our Brazil friends, but not enough to feel like we could pull off a team there.

Then, in December of 2016, we get this text message from our former pastor, Fernando Brandão, wishing us a Merry Christmas. Knowing that he comes to the U.S. for Christmas often, we responded and found out he and his family were in Tennessee, and we were planning to visit our daughter there. So, we met at Fernando’s favorite restaurant—Cracker Barrel.

Pastor Fernando was our pastor for our last six years in Brazil. The Second Baptist Church of Brasilia had about 200-250 attending and together we planted over 30 churches. Our partnership with Fernando and American volunteers was full and rich and fun. Fernando is a great visionary and a wonderful motivator. A unique Brazilian and a unique person. And he and his family became family to us.

A few months after we transferred to Kenya, he called and said he had been offered the executive director position of the Brazilian National Mission Board, and he was seeking Jeff’s counsel on taking that. Jeff knew that if Fernando took that position, he could motivate Brazilian Baptists to reach their own, and IMB wouldn’t need missionaries there anymore.

Long story short, Fernando took the job—and sure enough, he is doing a wonderful job. The National Mission Board now has more than a thousand missionaries, and there are very few IMB personnel reaching Portuguese-speaking Brazilians.

Inspired by IMB’s Journeyman program, Fernando started a “Radical Missionary” program for young adults. They commit to two years and are trained to live and minister in extreme locations, like off-the-grid Amazon villages. They are placed in those locations two-by-two to share the gospel and plant churches.

In the course of our lunch conversation, Fernando invited us to bring a team to take the mission boat down the Amazon and do medical clinics in villages where they have Radical Missionaries. Attending to physical needs draws a crowd; sharing the gospel with each person coming through the clinic and in an evening worship service will hopefully draw people who are open and interested in the gospel, and help these missionaries start churches.

This was clearly what God intended for us to do with a volunteer team.

Oct. 20: Today was a great day for organizing and getting ourselves ready. We packaged pills, worked on our suitcases, worshiped, and enjoyed the Amazon boat ride.

Tonight, we got word that our timing was slowed due to the low river and avoiding sandbars. We won’t get to the first village until after lunch tomorrow.

Half a day. Your timing, Lord. For some reason, this is what you’ve worked out. Thank you for your plan.

The first village has around 200 people, about 75% children—and the Radical Missionaries have only been here about four months. We are the first boat ministry they’ve had. There is one church, built long ago, so there are a few believers. Our prayer is that we represent God’s love to these people.

Oct. 21: We started work today around 3 p.m. We passed by the village around 11 a.m., but with the river 15 yards low, the Brazilians did not recognize the village. We went two hours upstream, then turned around and went back. For some reason we won’t know until we get to heaven, we weren’t supposed to get there earlier.

We set up the clinic and saw patients for two-and-a-half hours. Sixty-eight patients came through: 60 medical, 30 to the eye doctor, 21 to dentists. Five people accepted Christ during worship and evangelism.

Oct. 22: Today was a full day. It took awhile to get the clinic set up and rolling smoothly. Physically, it was tough. We had a steep climb up a dirt bank, across yards, and down and over a creek. Since the eye doctor was on the boat, several trips were made getting people there and back. When the temperature got over 100, three of us took turns walking people to and from the boat, just so we wouldn’t overheat and pass out.

But we saw 182 patients, and had around 60 kids for the children’s activities. Over 25 people accepted Christ, including the village leader and his wife! The leader of the village across the river is a strong believer. When he heard the Evangecube presentation, he asked one of the young Radical Missionaries to come and train them in how to share.

Brent (Cloyd, director of missions for Greater Wabash Baptist Association) preached; 80-90 people came and five adults made a decision. Thank you, Lord, for getting us through!

Oct. 23: Today was a “not going as planned” day, but ended up being the best day so far. The village was smaller and we saw everyone who came to the clinic by 10 a.m. So, we formed visitation teams and sent them out into the village to do house-to-house visits until lunch. It went well—some people accepted Christ!

Lunch came and then we went back to work. By 2:30, we saw everyone waiting and were just sitting around when a boat pulled up with teachers and students from a nearby public school. We attended all who wanted to be seen, then pulled them all together and had a question/answer/chat time. Pastor Mike (Killian, of Rockford) then did the plan of salvation and several of them accepted Christ. But all of them listened intently. Best afternoon yet!

Oct. 24: We arrived and saw the worst bank climb yet—mud, straight up. The boat crew worked an hour to get us a path to the top. I was so worried about our 82-year-old, but she did it!

We set up in a building right on the bank overlooking the Amazon River. Clouds! Wind! Dolphins jumping in the water! Lots of shade and a nice veranda to use. We were up and running before 8:00. By now, everyone knows their place and things get rolling quickly.

Three of the Radical Missionaries came to do evangelism and it worked well. Lots of children showed up to play.

Around 10:30, heavy rain came. We finished in the upper clinic, but the eye doctor and dentist continued on the boat, so we stayed up on top. By the time we headed down the hill, it was slick as ice. One fall on the hill, one fall on the wet boat deck, but no one hurt. We were ALL praying through that one.

Oct. 25: We arrived at the Manaus port at 9:30 a.m. and walked through downtown to the tourist market. Everyone shopped a while—it was HOT. We had lunch at noon and then our closing devotion, a great time of sharing and closure together. It seems everyone is pleased with all God has allowed us to do. Many praises and thanksgivings to God and to each other—as well as gifts to our Brazilian partners.

Thirteen American churches were represented and nine Brazilian churches as well. We all came together despite the language and cultural differences.

These river people are unreached for a reason—they are difficult to get to. But with God’s help and protection, we saw:

Oct. 29: After extending our trip to visit with Pastor Fernando and his family in Rio de Janeiro, our time in Brazil is over! It was so very good to come back, to reconnect with the culture, to renew our Portuguese language skills, to visit with friends—both old and new—to eat the good food. We didn’t know if we would ever get the opportunity to do this again or not. What a blessing!

But at the same time, we leave knowing that our call is to the U.S. now—and not back to Brazil full-time. While we would definitely be open to taking teams back and doing short-term work here ourselves, we know our work is in Illinois at this time in our lives.

Lord, how can we use what we’ve experienced these two weeks in Brazil when we return to Illinois? Help us to process all we’ve been through, and use it to inspire others to serve you better. To you be the glory! Amen!