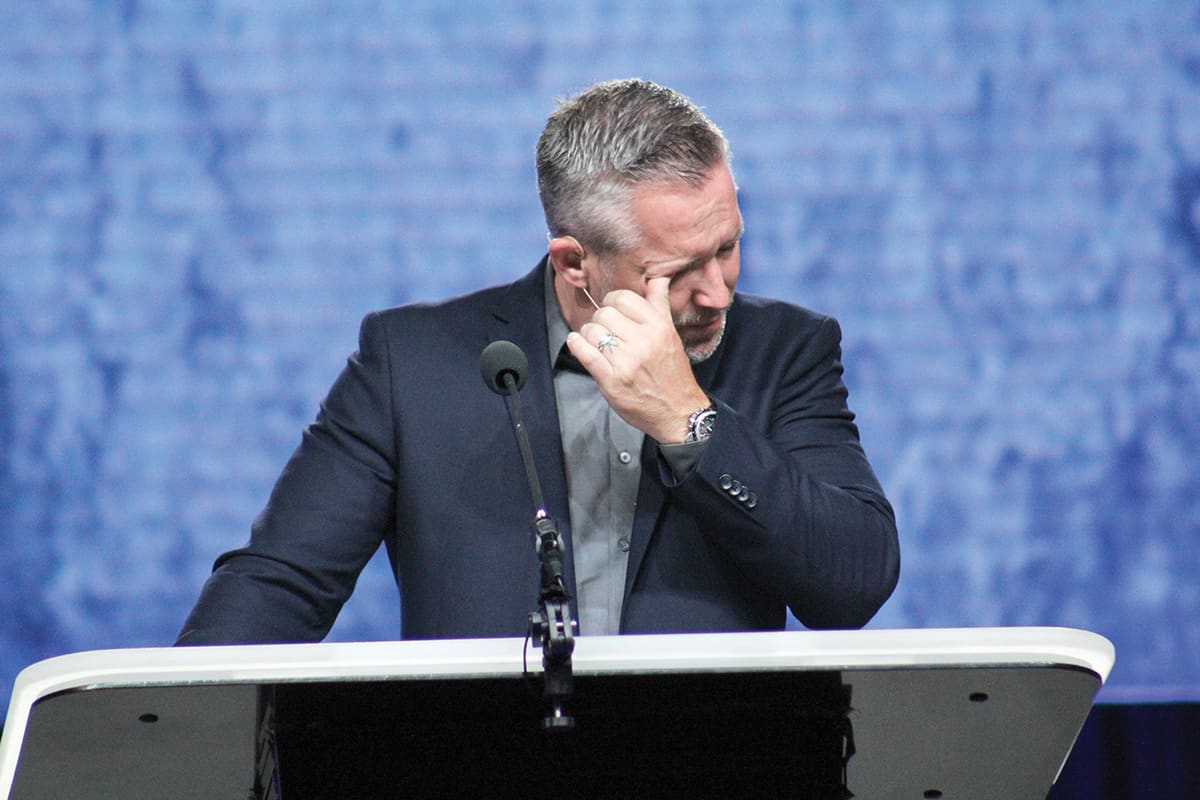 Southern Baptists lament their failure to protect those vulnerable to abuse, and commit to care well in the future

At the 2019 Southern Baptist Convention, Baptists heard a clear call to repent of indifference toward sexual abuse and failure to care for survivors. They responded, engaging in a time of corporate lament led by President J.D. Greear, and voting to amend the SBC’s governing documents to ensure churches take appropriate, biblical action on matters related to abuse.

During the June 11-12 meeting in Birmingham, messengers also saw new roles and opportunities for women, and continued a discussion on racial reconciliation. And they celebrated the cooperative effort to take the gospel around the world, commissioning 26 new missionaries.

But mostly, the tone was somber, as messengers considered that the unthinkable has happened in our churches. 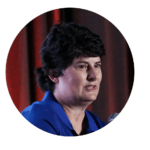 Susan Codone’s voice barely wavered, even as she talked about unimaginable trauma. The engineering professor told her story of childhood sexual abuse to an audience in Birmingham that leaned forward to better hear her steady voice.

For the first time publicly, Codone shared she was a teenager when she was abused first by her youth minister, and then by the pastor of her church. The main point of her story, emphasized by the advocates and fellow survivors who joined her in a June 10 panel discussion, is that her personal trauma is imaginable for far too many in the Southern Baptist Convention.

Nationally, one-in-four women and one-in-six men are sexually abused before they turn 18. Almost all—90%—of child victims of abuse know the perpetrator. Those statistics are included in a 52-page report released just prior to the Southern Baptist Convention by a group charged with studying sexual abuse in SBC churches.

Weaving in stories like Codone’s, the report paints a devastating picture of the long-term effects of abuse, and its prevalence. It recognizes areas where the SBC has failed regarding sexual abuse, including a lack of training for staff and volunteers, failure to take seriously allegations of abuse, and recommending suspected abusers for new employment.

“Church autonomy is a precious Baptist doctrine, but it is no excuse for accountability,” Southern Baptist Convention President J.D. Greear said in Birmingham. “We’re here today to declare that even one victim is one too many.”

In panel discussions, corporate lament, and voter action, Southern Baptists dealt with the issue of abuse in Birmingham, leaving with new resources to aid in awareness, prevention, and care for survivors.

“Our gospel is that God gave his life to create a place where people who wanted to run to him for refuge could find refuge. What greater lie could we tell about the gospel than to not be doing everything that we can to make sure our churches reflect that?” Greear asked.

“People say, ‘Well, is this a distraction from the mission?’ This is the mission.” 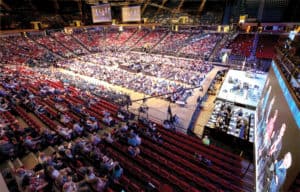 Almost 8,200 messengers convened at the Birmingham-Jefferson Convention Complex June 11-12 for the first SBC annual meeting in the city since 1941.

A Houston Chronicle series last spring uncovered hundreds of cases of abuse perpetrated by Southern Baptist ministers and volunteers. “One of the things God is doing is shaking a sense of invulnerability,” said Ethics and Religious Liberty Commission (ERLC) President Russell Moore, referring to the belief that “it can’t happen in my church.”

“God is uncovering some awful things,” said Moore, whose entity sponsored the panel discussion where Codone shared her story. “But at the same time, he’s raising up amazing, encouraging things too.” Like listening to the voices of survivors, he added.

The Southern Baptist Sexual Abuse Advisory Study, appointed by Greear in response to a motion made at the 2018 annual meeting, spent a year interviewing survivors, advocates, experts, and church leaders on how Southern Baptist congregations can best handle cases of abuse and exhibit care for survivors.

Their report led to the Caring Well Challenge, an 8-step process designed to equip churches to be safe for survivors and safe from abuse (see page 7). Greear is asking churches across the SBC to train and equip leaders, enhance policies and practices related to abuse, and dedicate Sunday services on May 3, 2020, to address abuse.

Churches can sign up for the Caring Well Challenge, which launches Aug. 25, at caringwell.com. A free 12-session video training resource is available on the website.

Messengers approved an amendment to the SBC Constitution that specifies sexual abuse as grounds for discontinuing cooperation with a church. To take effect, the constitutional amendment must pass by a two-thirds majority at the 2020 SBC
annual meeting in Orlando.

In Birmingham, the amendment was debated on the convention floor, with much of the conversation centering on whether the wording in the amendment is specific enough. As one messenger from Louisiana said, “I believe if we want to speak to abuse, this convention ought to speak with great clarity and not ambiguity.”

Executive Committee President Ronnie Floyd explained the committee wants future Southern Baptists to be able to speak in their specific cultural moment, so the wording was crafted carefully by the committee. After several minutes of debate, messengers approved the amendment.

Messengers also voted to establish a standing committee to investigate claims of misconduct against churches related to abuse and other issues.

“I was proud of how Southern Baptists handled the sexual abuse issue today,” said Paul Cooper, pastor of Marshall Missionary Baptist Church. “Anyone can and should speak against sexual abuse, but it was past time to do something about it.”

Greear and other SBC leaders were careful to note that the report and resulting action are not the final step in addressing abuse, but the first.

“The fact that we changed our Constitution and bylaws shows that as a denomination, we are standing on the truth of the Bible,” said Lindsay McDonald of First Baptist Church, Casey. “And with clarity we are communicating that through Jesus, we should be offering grace to all and a listening ear.”

Make the church a refuge

The complexities around handling abuse well were front and center in Birmingham because of a news story about a Southern Baptist church in Texas. A June 10 article in The New York Times detailed an allegation of abuse involving a former children’s minister at The Village Church. Christine Bragg, mother of the girl Matthew Tonne was arrested for molesting, says the church was more interested in protecting itself than her child.

Village Church pastor Matt Chandler joined the Baptist21 gathering of young leaders in Birmingham to address the story. “I’m not here to save face,” Chandler said during the unscheduled appearance June 11. “I’m here because I don’t want you to think we don’t need to be serious about these things.”

Without going into detail about the case, Chandler explained in general how his church handled the allegations that came to light last year, reporting immediately to authorities and asking the family to do the same. “I guarantee we’re not navigating this perfectly, but we’re doing the best we know how,” Chandler said. He urged churches to seek outside counsel on issues related to abuse.

During the panel discussion on abuse, Rachael Denhollander spoke often from the perspective of the sexual abuse survivor community, urging churches toward a better, more compassionate understanding of where they’re coming from. Denhollander, a member of Greear’s study group, was the first woman to publicly accuse gymnastics doctor Larry Nassar of sexual assault. She cautioned ministry leaders against the notion that survivors want to throw stones at churches.

Denhollander encouraged church leaders to utilize two strategies to facilitate a “heart shift” on dealing with abuse: First, imagine what you would say if it was another type of crime. For example, she said, if someone was robbed at your church, would you ask the victim if they had been wearing an expensive suit, if maybe they had invited the crime?

Second, she said, how would you treat this if it were a physical injury? All too often, the panelists said, we ignore the devastating effects of trauma from sexual abuse.

Abuse happens wherever there are people, said author and Bible teacher Beth Moore, also a survivor. “But what I want so much for us to reckon with honestly is our culture makes us vulnerable to it, because there is a disparity between the way we value men and women.”

Women have been sharing their stories of abuse, Moore said, but have often been met with an attitude that seeks to protect their church or their abuser. “We have a very, very serious problem because we have this built-in disesteem for women, and it’s got to change,” Moore said.

“Maybe you’re not the abuser or the abused, but you’re in a family where it’s happening rampantly….Our family is sick. How do we get well? How do we look this in the face and go ‘let’s deal with this’? And let’s deal with it together, men and women, side by side.”

After he abused her, Codone’s youth minister spent “33 years of unimpeded ministry” in her home city of Birmingham, she said. In her case, the primary problem was that there was no one else to tell. There were no women in leadership in her small congregation, and the church just wasn’t equipped to handle her abuse.

Churches should have a group of people designated to care for survivors, Codone said, which is one of the recommendations included in the “Caring Well” curriculum. “Equipping a church, to me, just makes sense. It doesn’t imply that a church is not a safe place,” she said.

“To take on this particular curriculum does not imply that the church is not already doing things. What it does is equip everyone in the church to respond to trauma, and to help the survivors, who may have experienced trauma at home even, understand that the church has become a safer place to go and deal with those things.”