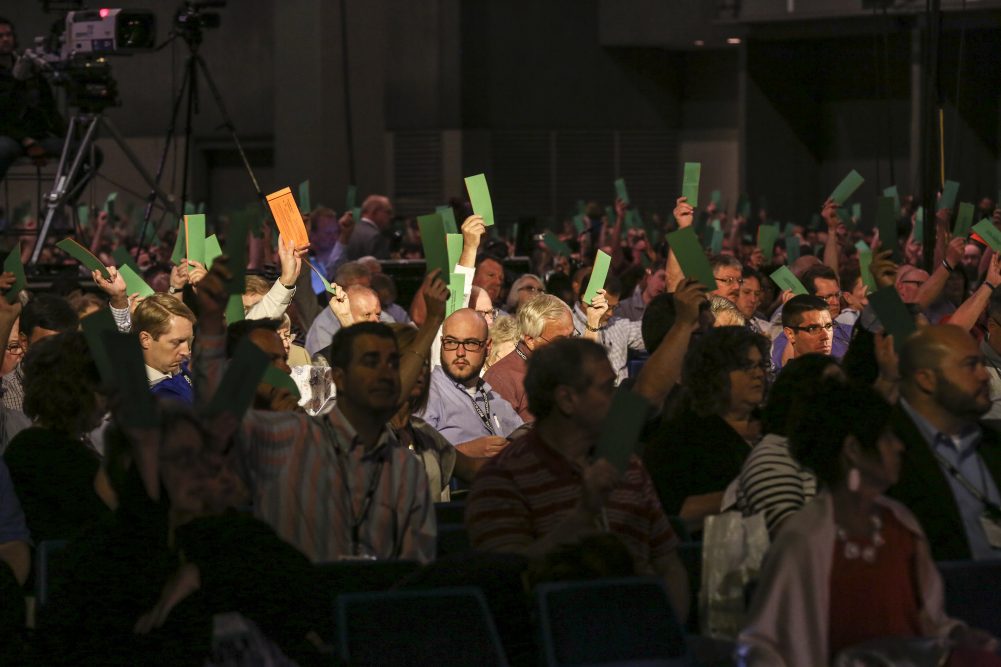 Messengers at the annual meeting of the Southern Baptist Convention cast ballots for a resolution during the afternoon session Tuesday, June 14 in St. Louis. Photo by Chris Carter.

Christians are being martyred around the world. Refugees are fleeing for their lives. There are still thousands of people groups unreached with the gospel, but limited funds required the SBC this year to reduce its missions force by more than 1,000.

“As followers of Jesus Christ, everything we believe in and place in high value is at stake,” said Floyd, an Arkansas pastor who finished his second one-year term as SBC president.

At home, spiritual lostness is growing. Religious freedom is under fire. And the threat of domestic terrorism looms large, exhibited in Orlando just hours before Southern Baptists convened in St. Louis.

The attack on a gay nightclub early June 12 that left 50 people dead cast a shadow on the St. Louis meeting, and sent Southern Baptists to their knees in prayer. Because all human beings are made in the image of God, Floyd said, the attack “is against each of us.”

Every pastor or leader who prayed from the platform during the meeting included Orlando in his prayer.

Baptists’ commitment to missions and evangelism also were on display in St. Louis, in messages preached at the Pastors’ Conference and through a joint presentation by the SBC’s two mission agencies that highlighted the role of the local church and individual Christians in taking the gospel to unreached communities.

And at the heart of the meeting was a show of humility by SBC leaders, as two men vying for the denomination’s presidency met before their run-off election, each telling the other one to take the post.

When Baptists dispersed from St. Louis, they left having unified around a new president, and having heard a call to urgency for and commitment to the gospel of Christ.

Good thing, because the stakes are historically high.

As pastors and churches struggle to navigate social change and growing lostness, the stakes are high for people in the pew as well, Floyd said.

“Our pastors and churches need you to be engaged more on Sundays than ever before,” he preached in his president’s address Tuesday morning. “But we also need you to intentionally integrate your faith on the front lines of culture.” In everything you do, no matter where you are.

At the St. Louis meeting, everyday Baptists were urged to take the gospel to the communities as they live their everyday lives, and were shown examples of regular people who are doing just that.

During his agency’s presentation, North American Mission Board President Kevin Ezell interviewed a group of church planters who have started new congregations in Iowa college towns and are moving next to Columbia, Missouri. On large video screens, meeting attenders heard from a college student planning to pay out-of-state tuition so she can be part of the new church in the state next door, and share the gospel with people who don’t know Christ.

“When you really get to it, we talk about the gospel more than we actually advance the gospel,” Floyd preached.

If we had just one-fourth of the passion for evangelism that we have for American politics, SBC politics, theological discourse, blogging, and a whole host of things, we could change the world for Christ, Floyd said before adding, “I can’t be president again, so I might as well be honest.”

We must recapture a vision for evangelism, Floyd preached, starting in our own towns. “This is where it begins.”

Many thought the election of a new SBC President would signal whether it was time for a generation of older pastors to pass the baton. There were theological issues at play too: Two of the candidates for president—Steve Gaines, 58, and J.D. Greear, 43—are established leaders of different theological streams within the SBC.

In the end, age and theology differences gave way to the greater good. A first vote between Gaines, Greear, and third candidate David Crosby of New Orleans forced a run-off between Gaines and Greear. A second vote was still too close to call, with Gaines narrowly edging Greear but not receiving the needed majority due to 108 disallowed votes. Greear announced Wednesday morning there was no need for another vote, because he was withdrawing his name from contention.

“Through this whole process, I’ve been praying for unity,” Greear, pastor of The Summit Church in Raleigh-Durham, posted on his website. “…If we go to a third vote, and one of us wins by one-half of one percent, it doesn’t matter which of us it is—it’s hard to see how that makes us a united body.”

After announcing his intention to withdraw, Greear received a long standing ovation from those in the convention hall. Floyd asked Greear to pray for Gaines and for the denomination, and messengers elected Gaines president by acclamation.

“I think it was a transcendent moment for the Convention because it embodies the spirit of humility that we as Christians are called to have,” said Kevin Carrothers, pastor of Rochester First Baptist Church and president of the Illinois Baptist State Association. “I think it was well-timed. I think it was a God thing. So, I’m excited about moving ahead, and admire both men and respect their decisions, both willing to step aside for the sake of something bigger than them.”

At a press conference after the election, Gaines said he and Greear “both were sensing the Holy Spirit moving in the same direction.” As both men considered dropping out of the race, they met together with SBC leaders the evening before the third vote was to be taken.

“I looked at him and I said, ‘Man, you can have it,’” recounted Gaines, who pastors Bellevue Baptist Church in Memphis. “He said, ‘No, I want you to have it.’” The meeting prompted Gaines to remember Psalm 133: “How good and pleasant it is when brothers dwell in unity!”

“When the leaders are unified in the Lord Jesus Christ, it brings unity to the body,” Gaines said. As president, he plans to emphasize spiritual awakening, soul winning, and stewardship.

Greear encouraged his supporters also to exhibit a unified spirit. “The task for those of you who voted for me is not to complain that things didn’t go our way,” he posted the morning of his announcement. “It’s to follow the example of our Savior, who came not to be served, but to serve.

“It’s time for us to step up and get involved, to keep pushing forward and engaging in the mission with those who have gone before us. It’s time to look at what unites us.”

It took a little longer than expected for messengers to elect Illinois’ Doug Munton as First Vice President. Because Tuesday’s business proceedings ran over time, Munton’s election didn’t happen until Wednesday afternoon. The pastor of First Baptist Church in O’Fallon, who ran unopposed, told the Illinois Baptist the St. Louis convention was in some ways the most unusual one he’s been to, but also encouraging.

“God brought some unity, much-needed unity, to our Convention. That’s encouraging for our future. I’m grateful for it, and hopeful because of it,” Munton said. “The Lord is obviously at work. He is not done with the Southern Baptist Convention.”

Also elected as officers were Malachi O’Brien, pastor of The Church at Pleasant Ridge in Harrisonville, Mo., as second vice president; John Yeats, executive director of the Missouri Baptist Convention, to his 20th term as recording secretary; and Jim Wells, retired member of the Missouri Baptist Convention staff, to a 15th term as registration secretary.