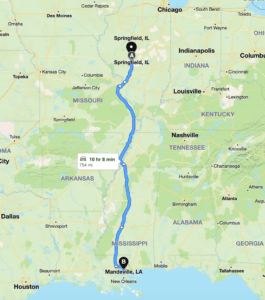 Illinois Baptist Disaster Relief (IBDR) has sent two shipments of food and supplies to Mandeville, Louisiana to assist with recovery after Hurricane Ida slammed the coast Sunday. “We have sent three semis to the staging area so far, and will be sending up to seven very soon,” said IBDR State Director Butch Porter. The Illinois team is well positioned to provide food and sanitation supplies, with the emergence of the distribution operation based in Mt. Vernon during the Covid-19 pandemic.

IBDR volunteers are driving the trucks, while recovery volunteers are preparing to be called out very soon. The Illinois team is partnering with Missouri Baptist Disaster Relief to operate their feeding kitchens. The two states are in different SEND Relief regions, under the direction of the North American Mission Board (NAMB), but the cross-state partnership allows Illinois workers to get into the area of need on the Gulf Coast more quickly.

Porter and his Missouri counterpart, Galen Moss, are working together in the operation. They are also reaching out to teams from the Kansas-Nebraska, Ohio, and Michigan Baptist conventions. “We have needs on both sides of the border,” Porter said of the relationship between Illinois and Missouri Baptists adjacent to the Mississippi River, “and so there are times when we pool our assets and personnel. We’re glad to support Missouri as they set up feeding kitchens on the Louisiana coast.”

Porter said the food shipments sent so far include soups and stews for mass feeding that can be distributed in 25-gallon Cambro units, a kind of large thermos box, and a second type of food stuffs that can be prepared in church kitchens. First Baptist Church of Mandeville, Louisiana, across Lake Ponchartrain from New Orleans, is hosting the staging area. Missouri Baptist Disaster Relief will operate the incident Command center, utilizing Illinois volunteers with the teams.

IBDR volunteers were alerted Wednesday that chainsaw and flood relief teams will be called out. In addition to the feeding kitchens, Illinois teams will support shower/laundry facilities, chaplaincy, and assessment. Porter will announce the deployments soon. As with Katrina and other record-breaking storms, deployments in the wake of Ida could be ongoing.

IBDR has more than 950 Illinois Baptists as trained volunteers. The national SEND Relief is the third largest disaster relief agency in the United States, along with the American Red Cross and the Salvation Army.