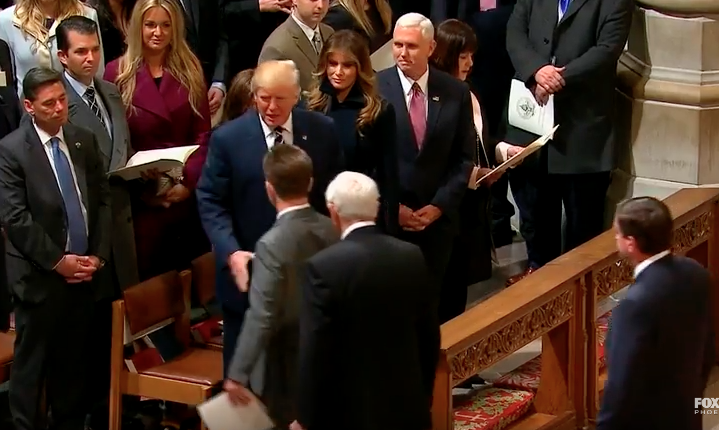 “Right now we’ve got a shot to really make a difference,” Ronnie Floyd told his congregation on Sunday. “God has given us a moment. It’s time to pray more than we’ve ever prayed in our country…to pray more with stronger conviction that every life matters to God.”

Floyd was just one of the notable Southern Baptist pastors participating in inaugural ceremonies for incoming President, Donald Trump. The pastor of Cross Church in Northwest Arkansas was one of the evangelical advisors to Trump.

Noting the current discord in the nation, Floyd said, “This is not about Democrats and Republicans. It’s about spiritual warfare; right and wrong. It’s not about what it appears to be about, it’s not about flesh and blood.

“You don’t announce you’re going to put pro-life judges on the Supreme Court and expect the world to receive it,” Floyd said in a video posted at his website.

Southern Baptists were prominent at the National Prayer gathering on Saturday following the inauguration, both in their placement in the program and on the platform among the 26 religious leaders invited to participate in the event.

Floyd and David Jeremiah, pastor of Shadow Mountain Community Church in El Cajon, Calif., sat on the dais of the National Cathedral, just behind the Episcopal celebrants who were leading the service and in front of the choir loft. Jeremiah read from Romans 5, the passage about character, endurance, patience, and hope. And Floyd read Psalm 23 from the King James Version.

Prestonwood Baptist Church pastor Jack Graham was one of the speakers in the “prayers of the people,” reading a scripted prayer on behalf of “those who serve.” And a granddaughter of Billy Graham, Franklin’s daughter Cissie Graham Lynch, read a similar prayer in a procession that included a rabbi, representatives of several Protestant denominations, and several Eastern religions.

Ramiro Peña, pastor of Christ the King Baptist Church in Waco, Texas, wrapped up the litany of prayers with The Lord’s Prayer. In an unofficial count, Southern Baptists outnumbered other faiths among clergy participating in the inauguration and prayer service. The interfaith service held an an Anglical cathedral had distinctly evangelical touches. Melania Trump led a standing ovation for the solo singer of “How Great Thou Art,” and the service concluded with “Great Is Thy Faithfulness,” which Vice President Mike Pence and his wife, Karen, said from memory.

On Inauguration Day, Robert Jeffress, pastor of First Baptist in Dallas, delivered the sermon at the private prayer service prior to the swearing-in ceremony. He titled the sermon, “When God Chooses a Leader,” taking the message from Nehemiah 1:11.

“When I think of you,” Jeffress said to Trump, “I am reminded of another great leader God chose thousands of years ago in Israel. The nation had been in bondage for decades, the infrastructure of the country was in shambles, and God raised up a powerful leader to restore the nation. And the man God chose was neither a politician nor a priest. Instead, God chose a builder whose name was Nehemiah.”

He noted the first step God instructed Nehemiah to take in rebuilding the nation was building a wall around Jerusalem to protect is citizens. “You see, God is not against building walls,” Jeffress shared. Jeffress recalled sitting with Trump on a jet, eating Wendy’s cheeseburgers, and talking about the challenges facing the USA. Jeffress was an early supporter of Trump.

He told the incoming President and Vice President to look to God for strength and guidance: “…the challenges facing our nation are so great that it will take more than natural ability to meet them. We need God’s supernatural power.

“The good news is that the same God who empowered Nehemiah nearly 2,500 years ago is available to every one of us today who is willing to humble himself and ask for His help.”

He instructed them, “God says in Psalm 50:15 ‘Call upon Me in the day of trouble I shall rescue you and you will honor Me.’”

Time: Trump held a very Godly inauguration
Christianity has been a part of the presidential inauguration since George Washington laid his hand on a Bible for the very first swearing-in. So, it was not unusual that Donald Trump sought to involve faith in his inauguration. But the ways in which the 45th President invoked God in unusually blunt ways in his inaugural address were. He quoted a Psalm of David from the Bible to buttress his policy. “The Bible tells us, ‘how good and pleasant it is when God’s people live together in unity.’”

Muslims angry imam to participate in prayer service
A popular Washington-area imam’s decision to issue the Muslim call to prayer at Trump’s inaugural prayer service has sparked a heated debate among American Muslim community leaders and activists over the appropriate ways to engage with a president, who they say has repeatedly disparaged Islam. Mohamed Magid, a Sudanese-American imam, is the only Muslim leader listed on a lineup packed with Evangelicals and other faith leaders who are scheduled to participate in the National Prayer Service at the National Cathedral.

SBC Pres. Gaines pens Christian response to inauguration
Today Donald J. Trump became the 45th President of the United States. As you know, Mr. Trump won a highly volatile election last November. Some see him as a candidate of much-needed change, readily resonating with his Reaganish slogan, “Make America Great Again!” Others see Mr. Trump as a less than desirable candidate for the highest office in the land. What are Southern Baptists to do?

Three S. Baptists nominated for cabinet positions
Three Southern Baptists — Tom Price, Scott Pruitt, and Sonny Perdue – have been nominated to serve in cabinet positions for the Trump administration. Price, a regular attendee at Johnson Ferry Baptist Church in Marietta, Ga., has been nominated as secretary of the Department of Health and Human Services. Pruitt, a member of Tulsa-area First Baptist Church in Broken Arrow, Okla., has been nominated as administrator of the Environmental Protection Agency. Former Georgia Gov. Sonny Perdue, was announced Jan. 18 as Trump’s choice for agriculture secretary.