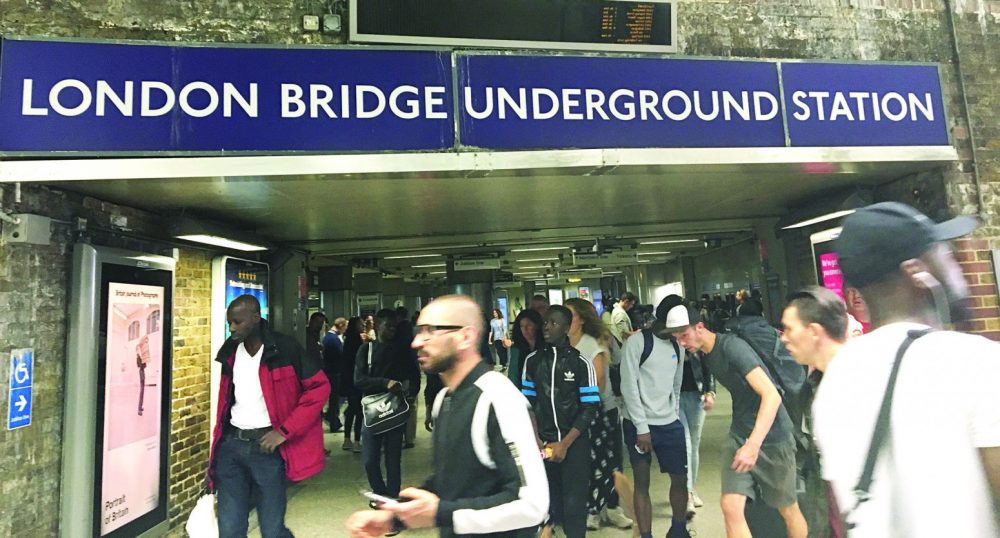 WAY OUT – Exit signs in the London subway system read “Way Out.” For Southern Baptists sharing Christ in this bustling multi-cultural melting pot, the phrase speaks of opportunity the gospel offers for more than half of Londoners who claim a non-Christian religion or no religion at all.

London | Tourists from around the world flock to Buckingham Palace, Westminster Abbey, The Tower Bridge, and other iconic English landmarks. Getting around via the Tube, red doubledecker buses, or those famous London black cabs is simple, and very British. It’s very easy to lose oneself in the surroundings. But the world is moving to London, and sharing its culture with it.

Across the street from the Royal London Hospital are rows of shops featuring Middle Eastern goods including halal meats, and just a few blocks away is the largest mosque in London. Other parts of the city are home to large Indian populations and curry has become a staple of the British diet.

Some 300 languages are spoken by its 8.3 million people within its 607 square miles. According to the International Mission Board, 37% of its residents come from outside the United Kingdom and one-quarter of its population arrived within the last five years. Forbes magazine named it “#1 City of Influence.”

This diversity is why London was chosen as one of five cities the International Mission Board (IMB) has selected to be part of its Global Cities Initiative (GCI).  In previous centuries most of the world’s population lived in rural areas. In this century, 54% of world’s population lives in urban areas and the Southern Baptist Convention’s missions sending agency has taken notice. The cities represent life-altering, world-changing, gospel-planting opportunities that can’t be missed.

The four other GCI cities are Dubai, where 80% of the population is foreign-born with more than 2 million residents from more than 200 nationalities; Kuala Lumpur, the capital of Malaysia, home to 8 million people with 62% following Islam and 20% Buddhism;  Shanghai, the largest city in China with a population of more than 24 million people, most of whom claim to be nonreligious or atheist; and an unnamed Southeast Asian city that’s home to nearly 17 million people with large populations of Hindus and Muslims and very few Christians.

“Every people group is represented in London. This is what heaven will look like,” said James Roberts, the IMB London city manager.

He described the economic conditions of the people living in the city, “There’s a wide gap financially, the poorest of the poor and the super wealthy, very little middle class. We’re trying to work together more across affinity groups.”

Where do you even begin to start in such a large city?

Victoria. Paddington. White Chapel. They’re all stations in the London Underground subway system where up to 4.8 million passenger journeys take place each day, according to Transport for London. There are 280 stations along the 11 lines of the Tube, as it’s commonly called. The stations are the key to IMB’s outreach here.

The team in London knows it won’t be easy. “It’s a lot of networking, coffee, work, limitless streams of people coming in,” Roberts said. “We try to connect, catch people as they come with the goal of starting new groups and church work. It takes a village to pull this thing off and courage to pull this together.”

Shane Mikeska is a student mobilizer on the London team. Before coming to England, he and his family lived in Asia, but illness forced a move from the tropics. “Western Europe is the hardest place to engage the population. In Asia it’s easier to have a spirited conversation. Here in this context most (people) are apathetic.”

On campuses, he said, “the students most open to new things are internationals. There are opportunities to connect to hold worship and Bible study.” Reaching them is a focal point in the cities iniative. “They can go home and go into their culture and share boldly.”

About 50,000 Americans study abroad each year and many are Christians. “We want them to come and plug into the local church and ministry, not just travel and experience things.”

The Global Cities Initiative allows people who feel called to go—but not in the traditional career-missionary way.

IMB President David Platt uses the word “limitless” to describe his vision for reaching the world: limitless numbers of missionaries utilizing “multiple pathways” to the mission field. GCI is one of those pathways to “send limitless missionaries to engage lostness all over the world,” Roberts said. “Business professionals, students, retirees—a GCI person raises their own support.” Groups and individuals are also invited to come serve on short-term projects. “There’s no language barrier to overcome,” Roberts said of his London mission field.

After getting to know the city, Mikeska has grown to love London and thinks others will too. “Now, I look at this vast city and wail over it and cry over it, like in the Bible. God’s done a transformational work in my heart,” the young missionary said. Even as he weeps for the lost, Mikeska concludes, “We’re excited about the future, being part of this team.”

To learn more, visit IMB.org. All statistics, unless otherwise noted, are from the International Mission Board.