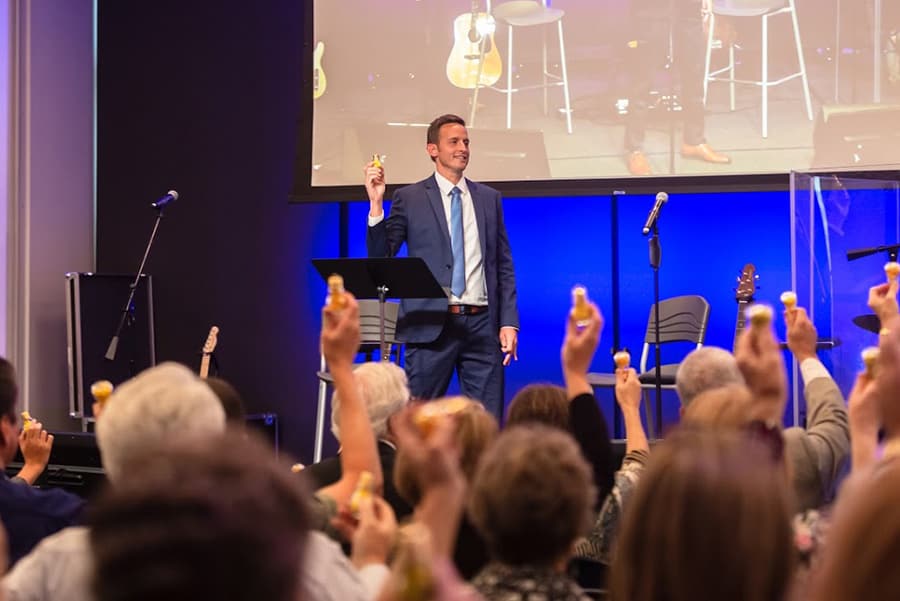 Tampico, Ill., native Ben Mandrell was installed as the 10th president of LifeWay Christian Resources and its predecessor, the Baptist Sunday School Board, in a ceremony at the publisher’s headquarters Aug. 26. Mandrell, most recently founding pastor of Storyline Fellowship Church in Arvada, Col., pointed to the cultural challenges faced by Southern Baptists’ main purveyor of biblical teaching materials.

“Without a doubt, the culture is moving swiftly away from the absolute truths—certainly away from a man who once said, ‘I am the way, the truth, and the life,’” Mandrell said. “And this is why we were given our name—LifeWay—because we’ve been called to shine the light of his word into the world.”
To symbolize this calling, Mandrell presented light bulbs to employees and guests and called on everyone to raise their lights high as an “army of creatives.”

“Jesus said his people have power to fight back the darkness of this world, to align forces in such a way that the gates of hell cannot hold us back,” Mandrell said. “It’s time for us to come together as one to change the landscape of this world.”

Mandrell quoted Abraham Lincoln in his presentation. “The best way to predict your future is to create it,” he said. The quote was noted on her Facebook page by fellow Illinoisan Sandy Wisdom-Martin, executive director of Woman’s Missionary Union, who was in attendance. “Pray for Ben as he leads LifeWay into the future God has for them,” she urged.

In a subsequent meeting with LifeWay trustees, Mandrell said he’s been asking how LifeWay can begin investing in churches across the country, intentionally reaching new territories and helping churches outside the Bible Belt.

Earl Roberson, acting senior vice president of the resources division, shared that LifeWay’s reach and impact is not waning with the closure of all its brick-and-mortar stores. In July, traffic to LifeWay websites was more than four times larger than the normal monthly traffic to LifeWay Stores.

While the organization was still grieving the loss of stores, Roberson said, they were excited about new opportunities moving forward to expand the reach of LifeWay. In addition to partnerships with Walmart, Books-a-Million, and Christianbook.com, LifeWay has launched an “authorized dealer” program with independent bookstores. To date, 277 stores have signed up for the program, placing LifeWay products in 14 new states and 90 new markets.

Photo: During what was called a “presidential celebration,” LifeWay Christian Resources President and CEO Ben Mandrell asks LifeWay employees to hold up a lightbulb memento that had been placed under their chair to symbolize their creativity and future impact as lights of the world. LifeWay photo