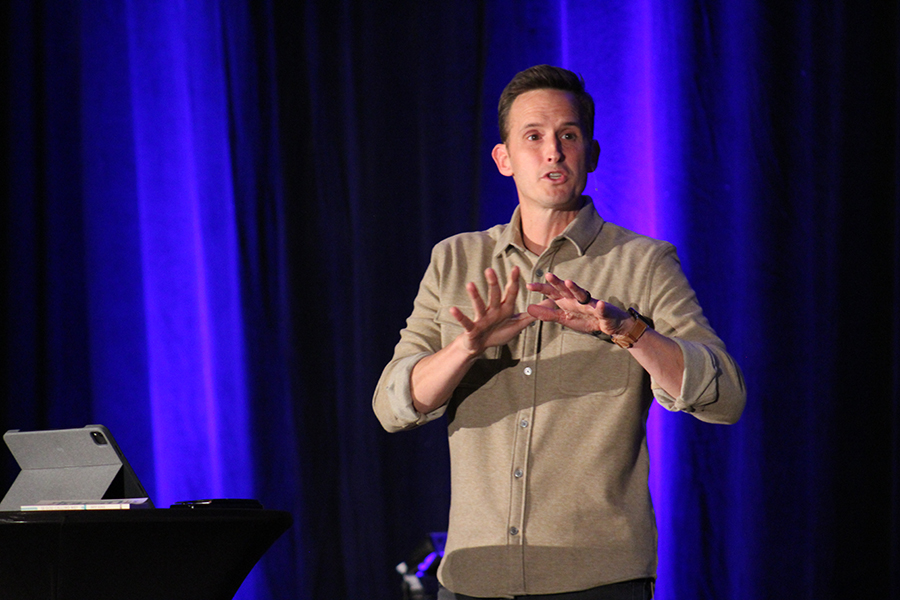 Lifeway President Ben Mandrell brought a message of encouragement in the midst of challenging times to Illinois leaders at the IBSA Annual Meeting. “You likely have no idea where God is going to take you in your ministry,” said the Illinois native Wednesday evening, Nov. 3 from the Crowne Plaza Hotel and Conference Center in Springfield.

Sharing principles of calling from the life of Israel’s King Saul, Mandrell told those gathered they may feel ill-equipped for it when the calling comes and might need and experience a filling of the Holy Spirit.

Despite the challenges of the past two years, he said, the church isn’t going anywhere, for two reasons. One, Jesus said the gates of hell will not prevail against the church. And two, God calls people through community.

The church is a powerful calling institution, Mandrell said. “We discover our gifts in the midst of believers.”

Mandrell drew from his own experience, telling how unprepared he felt when he received a call from Lifeway wanting to talk with him about the then vacant position of president. With his wife Lynley and their four children, he had successfully planted a new church in Colorado and had no thoughts of leaving. “The church was thriving and then Lifeway calls,” Mandrell said. “I told them we don’t even use your stuff. A lot of your stuff doesn’t work in Denver.”

They explained they were looking for someone who had the heart of a pastor and could take Lifeway beyond just the South and create things that would be relevant to churches in the Northeast, West, and Midwest. Mandrell told them he appreciated it but “I’m not leaving.”

Mandrell said, “That night and for the next 45 nights, I woke up at 3:30 in the morning with this gravity on my chest. I knew that God was calling.”

He noted one of his favorite books on calling is “Is God Calling Me?” by Jeff Iorg. He said,“I order them by the case to give out.” And he did. Mandrell had brought boxes of the book with that were available to pick up at the door as messengers and other attendees left the meeting that evening.

Mandrell reminded leaders who feel ill-equipped, “Without faith it’s impossible to please God. The only way to do that is to put a gap between your skill set and that assignment.” He told them that gap has to be filled with faith because “God likes to use people with gaps.

“You can’t experience God’s power until you’ve run out of your own.”