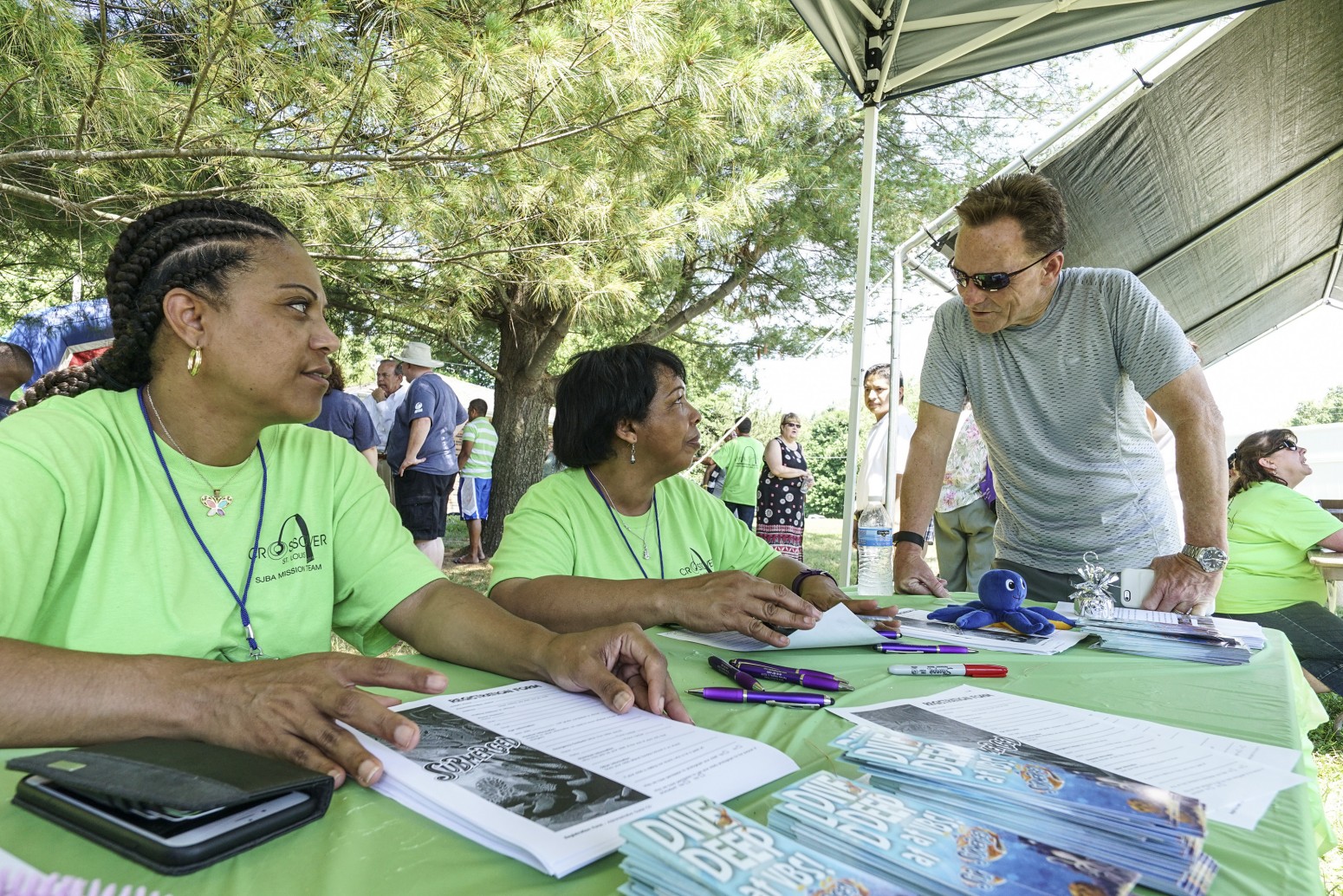 Fairview Heights | “The walk to the top was the hardest part,” Armando Fernandez said. “The ride down was easy.”

“We’re in love with the metroplex,” said David Gray, Sterling’s pastor. It’s that love that inspired the church to be a Crossover ministry site. Student pastor Jesse Wilham, worked to lay the groundwork for the evangelistic event.

Preparation is important. Whether it’s sharing the gospel story or planning an evangelistic event, the groundwork must be laid. Cooperation from a number of Christian ministries and agencies made it easy for volunteers to be placed in situations where they could share Christ.

The North American Mission Board paid for the zip line rides. Five hundred hamburgers and hotdogs were donated by a local company. A children’s ministry from Chicago provided drinks. The city of Fairview Heights loaned tents to the church. Gray said the local Chick-Fil-A even set up a stand “because the manager said they needed to be part of the event.”

People must be willing to share the gospel. Volunteers from churches in the St. Joseph Baptist Association in Missouri came to honor their former Director of Missions Clyde Elder, who recently died of cancer. Alan Lane, a member of the team said Elder was a strong supporter of missions and evangelism. Last year Lane said, “He told our association we’re going to go to Crossover St. Louis. This is part of our desire to honor him.”

People also need to learn how to share the gospel. Lane said his team had wonderful conversations with people as they walked door-to-door, using the “3 Circles” method to share the gospel. Some they spoke with had lost loved ones and “really needed someone to talk to.”

Another member of the Missouri team was retired International Mission Board missionary Carolyn Houts, retired in 2011 after serving for 35 years in Ghana. She prayer walked with the team, witnessed to people, and had a table displaying items from Ghana. “I was coming to the WMU Annual Meeting and read about Crossover,” Houts said. “I knew I needed to apply to be on the team and come with them.” It was her first time to participate in Crossover, which she called a “good opportunity.”

The Idlewild church’s Hispanic ministries pastor, Eloy Rodriguez, said the team came to Illinois because “We’re doing what the Lord has asked us all to do. This is our Samaria.” In Acts 1:8 Jesus instructs his followers to share the gospel in their “Jerusalem, Judea, Samaria, and the ends of the earth.”

Their church has made it a practice to prayerwalk their own community and others sharing Christ. “We’re doing what the Lord asked us to do, bring the Lord to the people,” said Lina Freeman.

The team arrived on Wednesday night and started canvassing the neighborhood Thursday. “We were asking people if there was anything we could pray with them about,” Rodriguez said. “Many said they had recently lost loved ones. But, one man said, ‘Last Sunday, I was going to kill myself.’”

The man told Rodriguez he had been in his car and was going to drive into traffic, but pulled back when he realized he wouldn’t only be killing himself, but the people in the other cars as well. But the man said he still didn’t want to go on.

Rodriguez and his team shared the gospel and he accepted Christ as his savior. Afterwards, “that guy gave me the biggest hug I’ve ever had,” Rodriguez said.

Down the street from the block party, the church hosted a soccer tournament, and Saturday night featured a concert by the praise bands from Anna Heights Baptist Church and Iglesia Bautista Latina in Effingham. A Sunday night concert by the Southern Gospel trio Sons of the Father capped off the Crossover weekend.

Gray said his goal was to reach 1,000 people through Crossover. By Sunday afternoon, 12 people had accepted Christ.