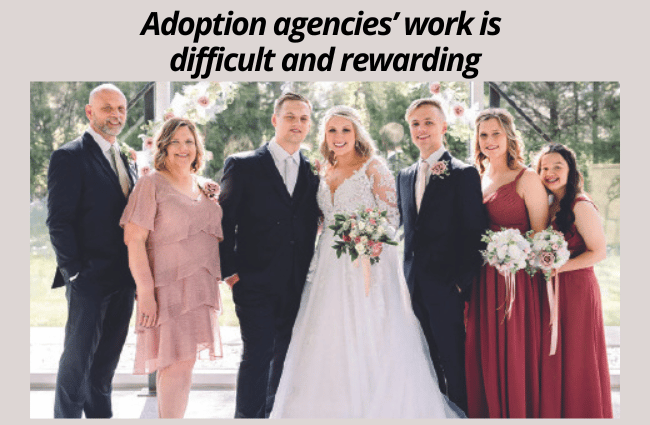 Misty Lucas applied for one job when her family moved to the Springfield area a few years ago. Madison Adoption Associates was looking for a director, and Lucas somehow knew the job would be hers. “Now I know it’s because of Angie,” she said.

Misty and her husband, Jack, who serves on IBSA’s Growth Team, welcomed their daughter Angie into their family through adoption three years ago. But when the Lucases initially moved to Springfield, adoption wasn’t on their radar, at least not for their family. Instead, Misty (with Jack, left in above photo) started working with the adoption agency to help other families. The agency started a program in Colombia in 2018, and that’s when Misty met Angie.

“I knew at that point she had stolen my heart and I had a special place for her, but I honestly thought it was more that I had to find her a family.” That family turned out to be her own. Angie was almost 12 when the Lucases hosted her in their home for a summer visit. A few months later, she relocated to the U.S. and became an official member of the family. (Angie is pictured above, far right, as an attendant at the wedding of the Lucas’s son Brooks).

Misty now directs her agency’s adoption programs in Latin America, helping families work through issues associated with adoption, including some more recent challenges. “China still has not opened their borders to adoptions since the pandemic started,” she noted. For families who have been matched or are hoping to adopt a specific child, it’s a waiting game with an uncertain end.

Getting paperwork through the U.S. immigration system is also taking longer, she said. And while an increased emphasis on mental health is beneficial for Americans, it may not translate well in some other countries where counseling or medication for mental health raise red flags for adoptive families.

On top of those newer issues, there’s the inevitable loss that comes with adoption. “This child is an individual who has a story before us. That story is a part of them and we have to honor and respect that story, no matter how painful it is,” Lucas said.

“Adoption is a huge blessing, but it also is very hard, and it doesn’t matter if you adopt an infant or if you adopt a teenager. There is always grief and loss involved, and there are always blessings involved.”

On the other side of the adoption equation, birth parents face a different set of challenges. “A lot of girls get more support in their decision to abort than in their decision to adopt,” said Valari Veteto, director of Faith Adoption Ministry for Illinois Baptist Children’s Home and Family Services. Adoption isn’t the easy way out, she said. Birth parents who choose adoption willingly put themselves in the middle of an uncomfortable situation. But the benefit is the picture of restoration it provides.

“My goal has always been the take the ‘scary’ out of adoption,” Veteto said. “It’s a very beautiful process.”