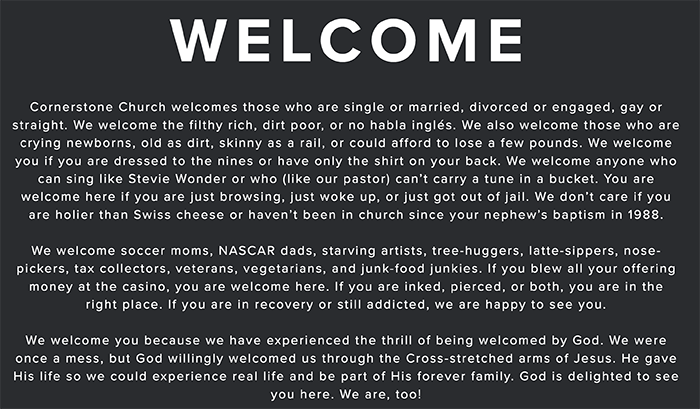 A screenshot from Cornerstone Church's website that includes similar language to what the author describes. 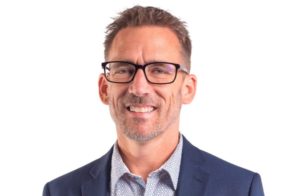 I’ve had the conversation many times. Sometimes it’s with the person who says, “I think I’m gay.” Sometimes it’s with their friend or their parents. In our culture today, discussions about sexual identity are commonplace. It’s not only in large metropolitan areas. It’s here, it’s more public, and it’s growing among teens and young adults.

For pastors I say the first thing to do is be ready for the conversation. Second, create an environment at your church where it’s OK for people to ask hard questions—for themselves or for someone they love.

For me, the conversation often starts with, “It’s a good thing that this discussion has begun. I understand how unnerving this is for you. But do not hope it will just go away. Do not allow your fear to silence the conversation.”

Parents especially need hope and guidance. They are especially prone to running from the conversation, so I try to bring peace first, then help them become more comfortable talking about their child’s sexuality.

Next, we get clear on the terms being used. I ask, “What do you mean when you say you’ve come to know you (or they) are gay?” It’s imperative early in the discussion to separate same-sex attraction from homosexual action. Attraction is not sin, but acting on that attraction is. By saying this, I acknowledge their feelings. I let them know from a pastoral perspective that they are being heard. I am not dismissing their experience, but I am not condoning homosexual activity.

Clarification of terms is important because it’s the identity issue that clouds the discussion. When a person says, “I am gay,” they are making a statement of identity. “I was born with same-sex attraction” is profoundly different from “I have no choice but to be true to (act on) my homosexual identity.” Many jump from the first statement to the second, not realizing they’ve skipped several steps. Mistaken identity thrusts them toward becoming a part of the LGBTQ identity and a cultural movement.

More and more, our pastoral staff deals with sexual identity issues. That’s because of the proliferation of the sexuality movement, and because we have made it safe to talk about the hard stuff of life. Guests know it even before they enter the building.

There are two signs beside our front doors. You’ll see the text if you visit our website. In short, one says everyone is welcome here no matter how they describe themselves. The list is funny (soccer moms and NASCAR dads, latte-sippers and nose-pickers) but also very serious (single or married, gay or straight). The other sign says whatever our spiritual condition on arrival, God loves us too much to leave us that way.

It’s a challenge for pastors to make everyone welcome, but to meet them with biblical truth. A consultant who was working with us on a project commented on the signs. “A lot of churches say it, but you really mean it,” he told me. Then he described a man he saw in our men’s room who was wearing heels and what looked like a woman’s dress.

“Oh, that’s George*,” I said. “He’s one of our regular attenders. We continue to love him and keep having conversations about the clothes he wears. His reasons for wearing a dress keep changing. He usually gets upset when we ask to meet with him. But he listens, adjusts, and keeps coming back. We keep walking with him even though it is often two steps forward and one step back.”

Pastoring through today’s sexuality issues gets complicated fast; it gets sticky. And you can expect it be an ongoing work. If we put up a sign, we have to mean it. We do not affirm sin. We help people follow Jesus, and that includes helping people discover what is broken or distorted.

Our ministry team will pastor a person experiencing same-sex attraction as we would someone who is struggling with anxiety or pornography or any other struggle. I preach on all types of issues we face, and sexuality comes up several times each year. I tell our people, “We will walk with you through anything and for as long as it takes, as long as you genuinely desire to follow Jesus.”

Michael Nave is lead pastor of Cornerstone Church in Marion. He is the elected vice president of IBSA.