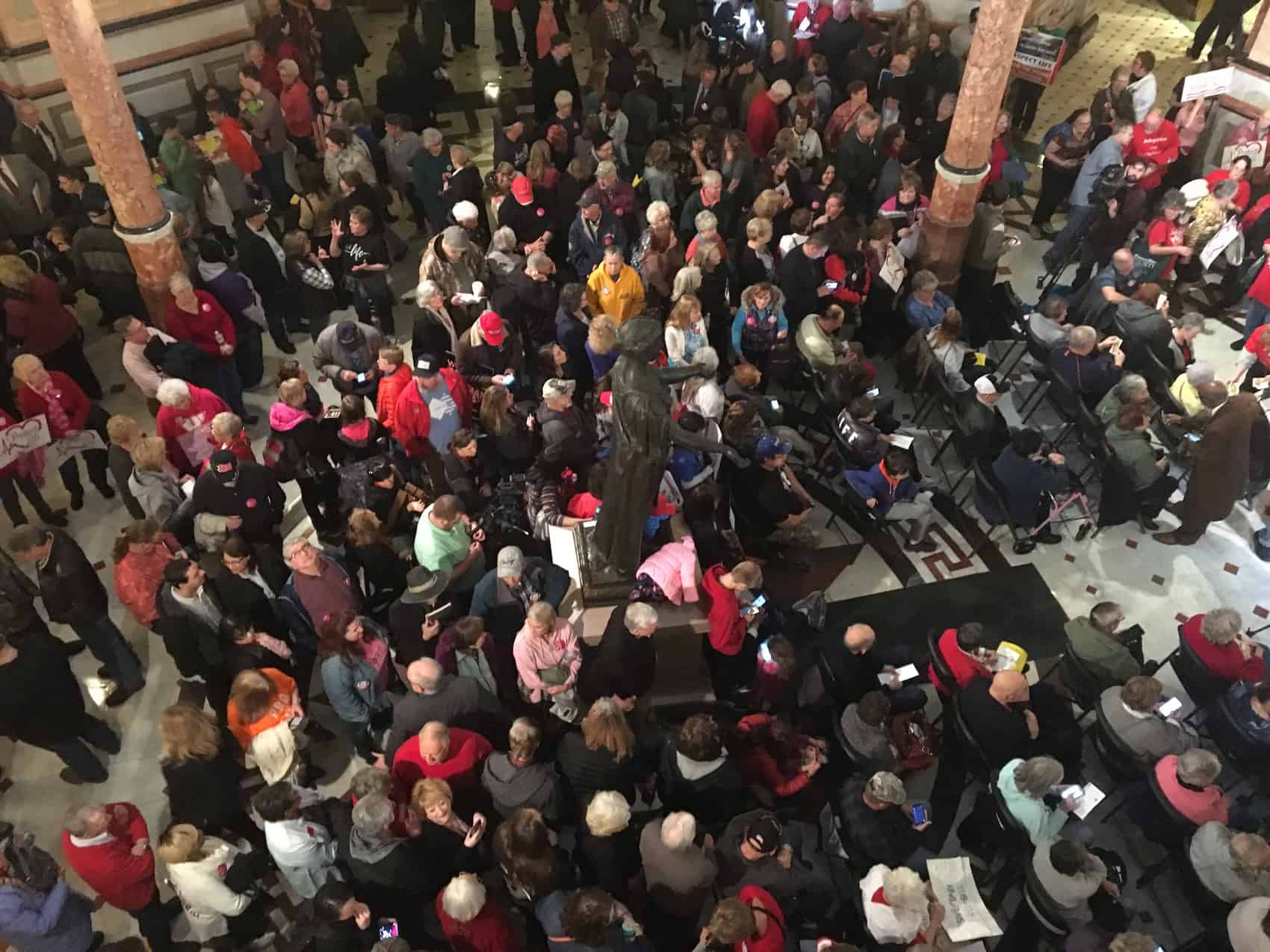 Springfield | An estimated 3,600 pro-life advocates turned out at the State Capitol in Springfield March 20 to rally and lobby legislators against new bills that would expand abortion in Illinois. The rotunda grew so crowded that lines of people formed outside as Capitol security shut down admission.

Those at the rally gathered to speak out specifically against the Reproductive Health Act, which would legalize abortion in Illinois through all nine months of pregnancy.

“We’re here today to speak for those who cannot speak for themselves, asking our lawmakers not to expand abortion in Illinois; not to damage conscience rights; not to force insurance companies, not to ask pro-life medical people to engage in abortion which they find reprehensible,” David Smith, executive director of rally co-organizer Illinois Family Institute, told the Illinois Baptist.

Smith urged Christians, whether or not they were able to attend the rally, “not to remain silent in the face of this horrific policy that’s going to victimize women and preborn children.”

The Reproductive Health Act has been compared to a law passed recently by legislators in New York which legalizes some abortions after 24 weeks gestation—known as “late-term abortions.” Pro-life lobbyist Ralph Rivera, legislative chairman of Illinois Right to Life Action, said the law Illinois legislators are considering is the “most extreme law, more extreme than New York’s.”

The Thomas More Society, a not-for-profit law firm headquartered in Chicago, has released an in-depth analysis of the law. They say it would:

The bill currently has a House version—HB 2495—and a Senate version—SB 1942. The House bill has been assigned to the Informed Consent Sub-Committee, and SB 1942 is waiting to be heard by the Senate Executive Committee.

The move toward expanded abortion laws in Illinois was an immediate concern for pro-life advocates after the 2018 election of Gov. J.B. Pritzker, who often stated his support for abortion rights during his campaign. Pritzker signed an executive order Jan. 22 to enforce a law directing state employee health insurance plans to include abortion services.

In addition to the Reproductive Health Act, a companion bill (HB 2467 and SB 1594) would repeal the Parental Notice of Abortion Act of 1995, which currently requires doctors to notify an adult family member of a patient under 18 prior to an abortion.  The Thomas More Society reported the Act “has been responsible for a reduction of more than 55% in abortions among Illinois minors since 2012.”

SB 1594 was heard by the Public Health Committee March 20 and passed through the committee by a party line vote of 8-4. The bill has been sent to the full Senate for a second reading.

While pro-life advocates were gathering outside the Capitol March 20, Drake Caudill, pastor of First Baptist Church in Carmi, was praying the opening prayer in front of the Illinois House of Representatives. Caudill told the IB before speaking to the House. “I’ve been praying on the way up here thanking him for this opportunity.”

-Lisa Misner, with reporting from the Thomas More Society and Illinois Family Institute