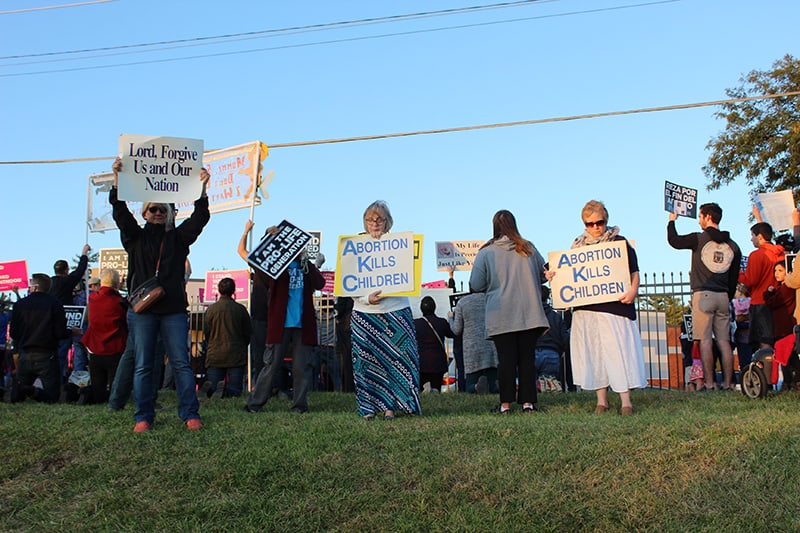 Prolife advocates stood outside the black metal fence of a new abortion clinic in Fairview Heights as its operators, Planned Parenthood, and their supporters cut the ribbon on the new 18,000-square-foot facility Oct. 21. The clinic, built secretly in the Metro East city and revealed only a few weeks ago, could become the largest abortion provider in Illinois, drawing clients from several Midwest states.

With numbers equaling participants in the opening ceremony, protestors stood on the grassy slope of a drainage ditch, holding signs that read “Planned Parenthood hurts women,” “Shut them down,” “Jesus forgives and heals,” and “Pray to end abortion.” Some sang “Amazing Grace” while others prayed quietly. The prolife groups represented were mostly Catholic, but included a mix of Baptists, Disciples of Christ, Lutherans, and others. Near the end of the ceremony a few advocates near the gate began to chant, “Hey, hey, ho, ho, Planned Parenthood’s got to go!” Generally, the chats were quieted by prolife advocates who favored prayer as a more effective protest. 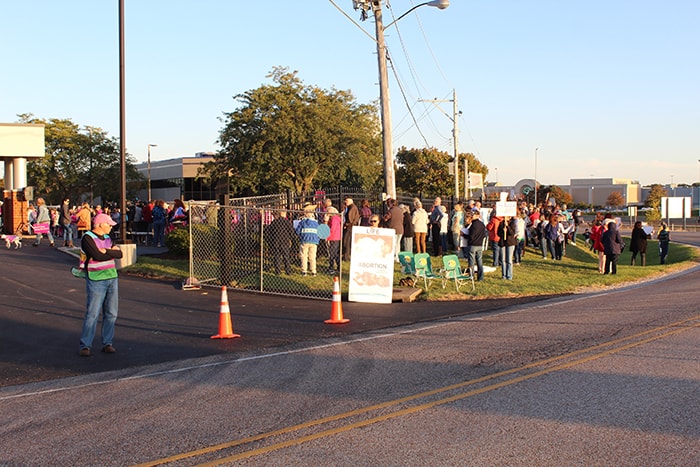 Planned Parenthood supporters are inside the fence, and pro-life advocates are outside the fence (on the right).

Inside the fence, with many wearing pink Planned Parenthood T-shirts and one man in black bearing a pentagram, supporters talked and laughed as they waited for the ribbon cutting. They mostly ignored the advocates, sometimes turning to wave their own signs towards the fence.

Illinois Gov. JB Pritzker wasn’t present, but he tweeted his support for Planned Parenthood, saying “I’m proud that you’re growing in our state.”

One of the advocates for life was Bonnie Lee, a member of Open Heart Baptist Church in Columbia, Mo. Lee is active with 40 Days for Life, a largely Catholic group. “I really call out for our fellow Baptists to become active because if it wasn’t for our Catholic brothers and sisters, I do not believe there would be a life-affirming battle going on,” Lee said. “Our Protestant churches are silent.”

Lee expressed her appreciation for the work churches do with Christian Pregnancy Centers, but she said that’s not enough.

“I asked a church the other day, how many veterans were in the congregation and when the hands raised, I asked how many of them won their battles sitting at home on their living room couch?” Lee said everyone laughed but then the room fell silent. “Because they know, to run a battle there have to be feet on the front lines.” 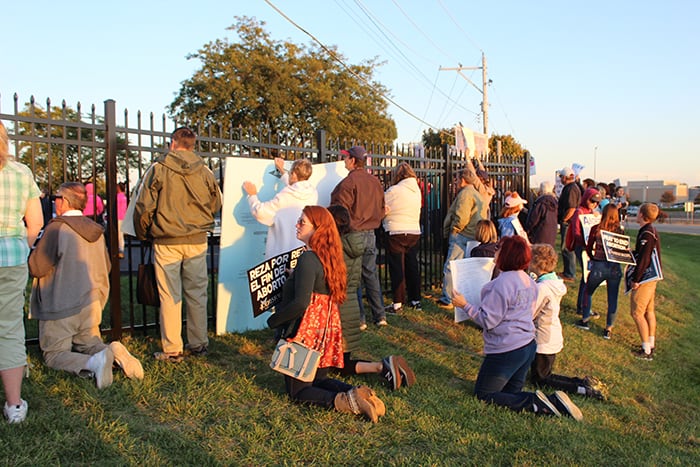 A group prays outside the Planned Parenthood Clinic.

“That’s exactly where we are when we’re at the abortion centers reaching out and offering a helping assistance to the women,” she said, her hand making a determined fist. “Letting them know someone cares. Letting them know there are other alternatives. Doing everything we can to meet them in their needs where they are at that day. That is the front lines. If we’re not there that day, we will not win this battle.”

Missouri has one remaining Planned Parenthood clinic in St. Louis, since the state has tightened abortion restrictions, in contrast to Illinois which is in competition with New York for the least restrictive statutes. Lee said Illinois Baptists need to find legislators that support their values and work with them as Missouri Baptists have with theirs. “When they have hearings, we get people to testify for them. We’re out canvasing for them.” 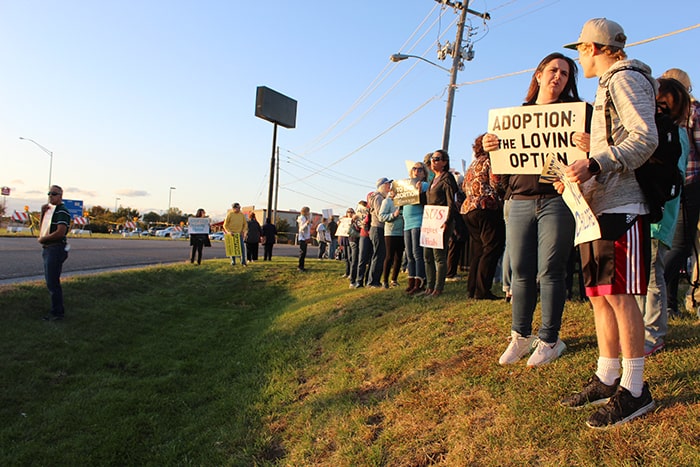 Some held signs to be read by those driving by on the access road.

While abortion clinics in Illinois have been deregulated, those in Missouri now must meet the same standards as other out-patient surgery centers. Pro-life advocates in Missouri supported that legislation. “If these abortion centers don’t want to meet those same standards, we close their doors and they have moved on,” Lee said.

“Sadly, we’re seeing them move on from St. Louis to Illinois.”

The large clinic begins operation on Wed., Oct. 23. As many at 11,000 clients per year are expected to be served at the facility.