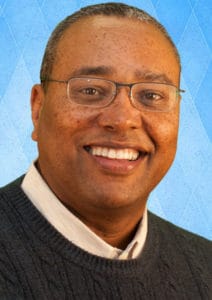 Marshal Ausberry is pastor of Antioch Baptist Church in Fairfax Station, Va., first vice president of the Southern Baptist Convention, and president of the SBC’s National African American Fellowship. He recently spoke with the Illinois Baptist about the church’s role in confronting injustice, and next steps for the SBC.

Illinois Baptist: What Scripture would you use to teach on injustice?

Marshal Ausberry: Last Sunday, I preached out of Esther 4:16. “…Then I will go to the king, though it is against the law, and if I perish, I perish.” Mordecai says, “Hey Esther, you’ve got a position, you’re in proximity to power. Will you stand up for your people?”

IB: That hasn’t always been the church’s position.

MA: The church in America at one time embraced slavery, condoned racism, and Jim and Jane Crow laws. It’s almost as if God has shut down the world and gotten everyone’s attention, especially his church. It’s like he has said, “OK church, you got it wrong in the beginning. Now you have an opportunity to get it right and stand up for people, for the least of these, for the disenfranchised, for those who are abused, assaulted, subject to racist policies.”

The church has got to bring the light to the world.

IB: What do you think is different about right now?

MA: I was a little boy in the 60s, when the Civil Rights peaceful marches were going on. There were photographs and some video strips of the Bull Connors of the world, of fire hoses on people, dogs on people, billy clubs on people. Women being beaten by police officers. Young men who were marching peacefully being abused, beaten, bloodied, and jailed. What propelled the Civil Rights movement were those pictures that went around the world.

IB: Do you think the church is finding its voice on this issue of injustice?

MA: I do. Like never before. What happened with George Floyd, it was so graphic and repulsive, that when people saw it, they could not ignore it. And I think God just pierced their hearts with this brutality to another human. I’ve been thankful to see the Church has really been on the front lines to say racism has got to stop, this is unfair. In 2020, it’s untenable that this kind of behavior still goes on.

IB: ‘Black Lives Matter’ as a slogan has stirred controversy because it’s sometimes thought to exclude non-black lives. Can you help us understand the concept?

MA: From Genesis 9:6, we know that all lives matter. We’re image-bearers of God. No matter the hue of our skin, we’re all created in the image of God. If we can respect each other as children of God, image-bearers, that’s where we start.

We’re not negating that all lives matter. But at the seminal moment in America, it’s our black brothers and sisters whose lives are at risk. When we say “black lives matter,” at this moment, we need to raise this issue up because it’s black lives that are paying the price.

IB: The SBC has made statements on racism on several occasions. Is something more needed now?

MA: We have come a long way. We ought not downplay that. We can celebrate our victories. But that doesn’t mean we stop there. We’re still at the beginning. The SBC has a tough history to press through.

IB: Leadership is a key issue.

MA: If you look at a lot of our entity structure, in their cabinet offices, in their senior leadership, you don’t see a lot of black and brown people, or Asian or Native American. We always want qualified people, that goes without saying. But we have to get used to seeing black and brown faces in high places.

IB: You’ve talked about how important trust is in the process.

MA: There’s a trap we can fall into if we’re not careful, that we always hire people like ourselves. It’s an inherent bias we have. Not intentional, but inherent.

When I was growing up, my dad would allow me to use the car, but I couldn’t own the car. We have to have the mindset in the SBC that we are ready to own and drive the car at the same time. The litmus test is where we stand on the Bible, and The Baptist Faith and Message. That’s the litmus test.

IB: And not comfort.